That Fox News fan who offered money online for people to kill an assortment of Fox News targets has been arrested.

A Washington state man with a history using Fox News’ website to call for the murder of liberals – including President Barack Obama – has been taken into custody by U.S. Marshals, according to the Sacramento Bee.

Scott Anthony Orton, 57, of Puyallup,  admitted to federal investigators that he is the man behind the online name “Joseywhales” who made the violent threats. Orto [sic] reportedly told authorities his intent was to “wake people up” by painting ” a mental picture with words. I’m a wordsmith. That’s what I do.”

Whatever Orton’s intent, his actual comments on Fox News' Fox Nation couldn’t have been more threatening:

“Josey” was reported to authorities in June. In July, he was still making blatant threats, including the ones about StemExpress that seem to have finally gotten him arrested. Although the Sacramento Bee reports that “Fox News cooperated fully with the FBI in its investigation,” the question in my mind is why it was us, and not Fox News, who sicced the authorities on this guy. Or, at the very least, why he was not banned from commenting.

A big thank you to NewsHounds reader Andrew S. who keeps an eye on Fox Nation so we don’t have to. Believe it or not, he found far more threats than we posted.

Sadly, Josey is not in jail. Raw Story notes, “Despite a request by federal authorities that Orton be held without bail, a federal magistrate judge ordered him set free on an unsecured appearance bond. He is expected to appear in a Sacramento courtroom on Dec. 29.”

And there are more potential Joseys still hanging out on Fox Nation. Another reader sent us these, just as I was writing up this post, from this thread about the bomb threat that shut down L.A. schools: 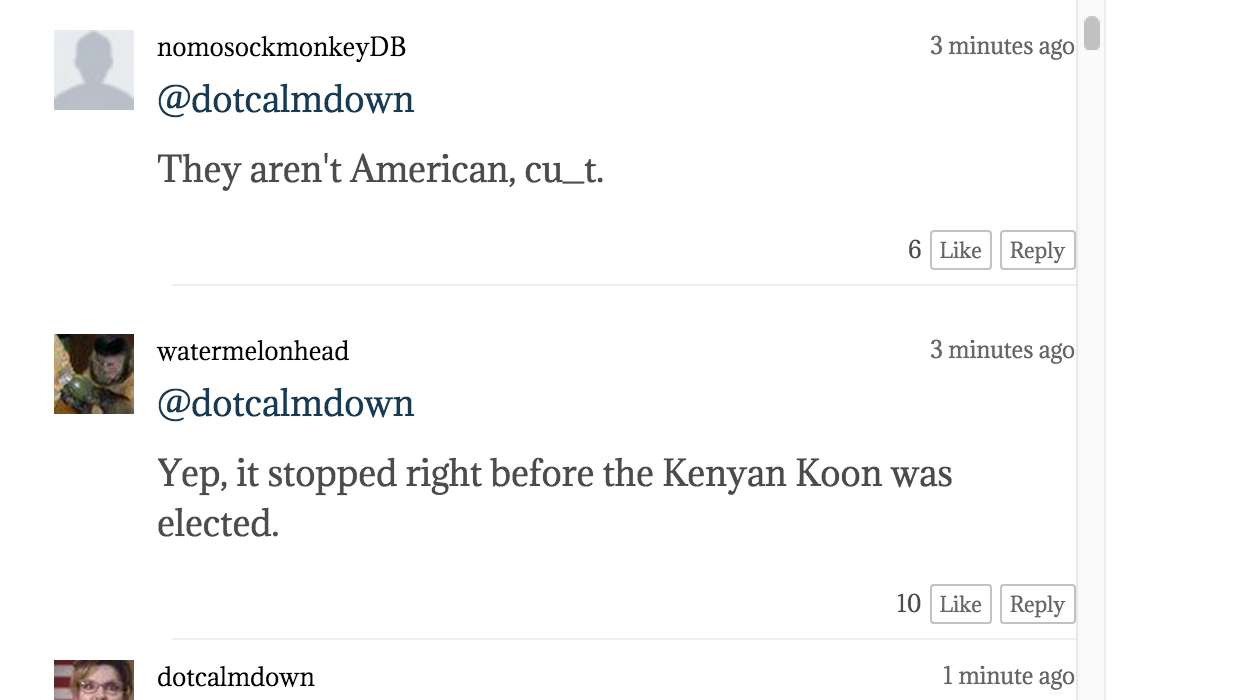 Lou Sassoles commented 2015-12-19 17:12:26 -0500 · Flag
It seems that some clever fox nation user has figured out how to write a script to auto flag certain people multiple times and make their comments disappear almost immediately. So not only do they defend Scott Orton, they quickly delete any anti-Josey and anti-republican comments.

This seems interesting- Josey appears to be a pot farmer in real life.

Antoinette commented 2015-12-16 04:18:53 -0500 · Flag
Intern Jesse should be fired and prosecuted for allowing this Scott freak for posting threats on the Hate Nation site.

Although Scotty boy is set free for now this clown will face a judge and felony charges which will ruin the rest of his miserable life.

Conservative media won’t touch this story. These clowns are too afraid to anger Nixon Trainee Ailes who would ban them from the Foxy Channel.

Um, no, Scott — per Merriam-Webster, a wordsmith is “someone who works with words, especially, a skillful writer.”

It doesn’t take any particular skill or intelligence to make online threats. As for “painting a mental picture with words”, I think you’ve confused being mentally disabled with painting mental pictures . . .

Randy van Brisen commented 2015-12-16 00:39:56 -0500 · Flag
I’ve dealt plenty with Josey. Unhinged is an accurate description. Sadly though he’s not the exception nor is he the worst that foxnation condones.

Anonymous commented 2015-12-15 23:22:30 -0500 · Flag
The right-wing media complex leads its viewers/listeners to the edge of the cliff of murderous hatred, so it’s not surprising that some jump off.

Ellen commented 2015-12-15 20:14:52 -0500 · Flag
David Lindsay, the story has been picked up pretty widely. What has not been picked up is how many other people this guy threatened and how Fox ignored it. I wrote a comment on Raw Story. I also sent this story around to lots of places last summer, without much result.

David Lindsay commented 2015-12-15 19:48:44 -0500 · Flag
This really needs to be picked up by the national networks. No offense to Newshounds, but Faux needs to be shamed on a national level. If it is possible to shame Faux.

What with all the mass shootings this year there has to be at least one network with the nuts to call out Faux. After all with all the shootings, it is only a matter of time before there is irrefutable evidence pointing directly at Faux for inciting it.

NewsHounds posted about Fox News’ Murder-Plotting Fan Has Been Arrested on NewsHounds' Facebook page 2015-12-15 18:43:49 -0500
So why was it us and not Fox News who reported this guy to the authorities and why was he allowed to keep posting on Fox Nation even after he threatened murder?