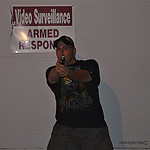 If you spent much time watching Fox News in the wake of the Fort Hood shootings, you almost surely heard “expert” after “expert” use the occasion to call for soldiers to be armed on base – and looser gun laws in general. But The O’Reilly Factor actually called on two military experts - and they pretty much demolished any argument for perpetually-armed soldiers.

Last night, O’Reilly hosted Lt. Col. Ralph Peters and Col. David Hunt to weigh in on the issue. It's worth pointing out that O'Reilly is a supporter of stricter gun laws (just don't call it gun control). Peters is hardly a squishy pacifist. In fact, he’s prone to talk up killing. The other guest, Col. David Hunt, advocates torture and killing. Each is also a Fox News analyst.

So it was shocking to me how reasonable Peters sounded when he said:

I’ve only heard people that have never served in the military, themselves, say that (soldiers should be armed on bases). It’s absolutely nuts and let me give you four quick reasons why:

1. If our soldiers carry their loaded weapons at all times, that assassin yesterday wouldn’t have had a .45 caliber handgun, he would have had a loaded assault rifle.

2. Soldiers wouldn’t want that. It would be an enormous hassle. Most soldiers aren’t steely-eyed killers. Most are clerks, intelligence analysts, truck drivers, mechanics. They’ve got real work  to do and, you know? Carrying a loaded weapon around all the time is a burden. How would we like it if people carried assault weapons… in our workplace?

3. Do we really want a soldier to have a loaded M16 on his shoulder if he’s having a marital spat? How about a suicidal soldier or one with suicidal thoughts or tendencies? Should he have a loaded weapon?

And fourth, not least, when you have an incident like this, …you want trained responders who know what they’re doing. You don’t want every finance clerk on Fort Hood firing his M16 on rock and roll in every direction.

Hunt agreed. He said, “I don’t think it’s a Second Amendment or gun issue at all.” He said, “The only possibility to discuss, not implement, would be considering arming some leadership but you really have to look at it.” He sounded much more enthusiastic about improving mental health treatment for soldiers. “I agree this is a random act of violence. It’s almost not preventable,” Hunt added.

I don’t  believe our soldiers should be armed on the base… I think if our viewers think through that, that you’re gonna arm 50,000 soldiers on a military base so that they can defend themself if somebody tries to shoot at one of them or a bunch of them. Can you imagine the first responders coming on a scene and there’s people shooting all over the place and they have to determine who is friend and who is foe? I think the potential for leading to more violence by arming everybody is rather significant.

The soldiers… are not policemen. They are not trained to control a violent situation and de-escalate it.

A slew of other military experts echoed those comments to Media Matters yesterday.

Fox Newsies love to talk about how much they love the military. But will they actually listen to their own real experts if it contradicts their political agenda?

Jane S commented 2014-04-05 01:47:38 -0400 · Flag
I forgot to mention one other point General Scales mentioned, with some vehemence, which is that we already have a big problem with suicide in the military, and that encouraging them to carry guns around with them on the base… well, you get the point.

Jane S commented 2014-04-05 01:44:25 -0400 · Flag
Add to the list Fox’s own General Bob Scales, who was scathing — Thomas Golden — about the idea of soldiers carrying personal handguns on bases. He pointed out that soldiers aren’t trained to use handguns and they’re a very different weapon than the M-16s, etc., that they are trained to use.

He said just what the other military guys said, that it makes no sense for soldiers to be armed on bases. He said law enforcement should be delegated to people trained in law enforcement because they have the expertise to handle these incredibly difficult situations, as the MP did in this one, and your average GI does not.

General Scales also pointed out that Nidal Hasan and Ivan Lopez are extreme aberrations and that military bases are by far the safest places on the planet.

It’s pretty clear that only yahoos think it’s a cool idea for guys on the base to carry arms around with them.

Thomas Golden commented 2014-04-04 22:51:20 -0400 · Flag
the problem with this was, we were not saying all soldiers should carry m16 rifles on base, we were saying that those soldiers with hand gun permits should be able to carry their handgun if they choose to…. and this person said we don’t want soldiers to have firearms in there homes incase they get into an argument with their spouse… plenty of soldiers that live off base have firearms in there homes, its only the ones that live on base that can not have them in their homes….

Aria Prescott commented 2014-04-04 17:03:24 -0400 · Flag
The female MP that stopped Lopez reported that she didn’t have her gun out until he drew his suicide pistol, which he put to his head after he had surrendered. That means that he was either coming out of his episode, or she was able to reason with him.

Or, to put it another way: The “good guy with a gun” was Ivan Lopez. Everyone who’s playing that game is in support of the shooter, because her gun played no role in stopping him, and he may have killed himself after realizing what he had done. It’s worth repeating that he did surrender before drawing the gun he killed himself with.

Not that the hosts of Fox News is smart enough to comprehend this- Aside from one quick attempt to point out how stupid Greg Gutfeld got with his wording on “The Five” (note that I said the complaint was about how he sounded with his wording, not that the point itself seemed stupid), all the rebuttal seems to come from contributors.

Carol Gruber commented 2014-04-04 11:22:35 -0400 · Flag
Can you imagine the first responders coming on a scene and there’s people shooting all over the place and they have to determine who is friend and who is foe?

but, the good guys will be wearing white and the bad guys black. Right?

NewsHounds posted about Fox News Military Analysts Destroy Fox’s ‘Fort Hood Shootings Prove Soldiers Should Be Armed On Base’ Meme on NewsHounds' Facebook page 2014-04-04 10:00:08 -0400
Fox Newsies love to talk about how much they love the military. But will they actually listen to their own experts when it contradicts their political agenda?