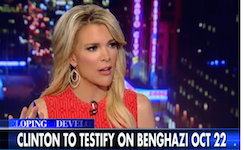 Yup, Benghazi is going to be a movie and it’s scheduled for release in January, 2016, right smack dab in the middle of the presidential campaign. What could be a better Christmas present for Fox News, other than a Bill Clinton sex tape?

Megyn Kelly is certainly excited by the prospect. She gave us a “sneak peek” of the “dramatic new movie trailer” for the movie which will be out “just in time for the first primaries and caucuses.”

She played more than a minute of the trailer. “It is dramatic,” Kelly repeated afterward, “and it is going to come out at what she (Hillary Clinton) may consider an inconvenient time.”

“Will it have any impact?” Kelly asked.

Perino said, “It is possible.” She likened the trailer to judging a meal from its menu. But that didn’t stop her from pushing the narrative that the film will be damaging to Clinton. “We do know that the left and the liberals are so concerned about this movie that they’ve already put resources behind trying to tear it down.”

Nor did Perino shy away from broadcasting what she thinks people would or should take away from the movie:

PERINO: I do think that one thing it will do for sure is to showcase that there are people who think that Hillary Clinton is untrustworthy and secretive to a fault and also will do anything to try to help herself politically. And what I mean by that is, remember that the Obama administration – we still don’t know who exactly pushed the video but it’s pretty clear that it came from the left and that Hilary Clinton and Barack Obama repeat this lie…

Kelly, who had been looking on with her customary-when-conservatives-are-speaking, thoughtful expression, added, “Directly to the victims’ families.”

“You see something like this, dramatically done by a high-value production company and …it can change things. It can change people’s opinions,” Perino said.

Fox is also already gearing up for any negative publicity. “Look how they went after American Sniper and it’s going to happen here again,” Kelly warned. That is, unless it's favorable to Hillary Clinton. “It’ll depend on whether she comes out looking good or bad. Then they’ll make up their mind. That’ll be the bottom line,” Kelly later added.

She was referring to the "liberal media" but believe me, that’s exactly what will happen on Fox News and The Kelly File, no matter how “independent” Megyn Kelly claims to be.

Watch the chop-licking below, from last night’s The Kelly File.

The network that broadcasts fiction . . . is relying on fiction for proof?

And, the network that hates “Hollywood values” . . . is suddenly embracing them?

Erich Pomfret commented 2015-07-30 16:43:52 -0400 · Flag
Apologies for my lack of recent comments. It’s because I’ve updated my Fox drinking game. Rather than just downing a shot every time they say “Benghazi,” I also drink whenever they devote a segment to Hillary. Now, I’m going to start drinking a double whenever they use both magic words in the same sentence. See you after the election.

Is she talking about the movie? I don’t see what other “video” she could be referring to, but saying an anti-Hillary movie came from the left doesn’t make sense. (especially in Foxworld)

The documentary’s producer is a political consulting firm friendly to Republicans. How is this legal under federal election law? Thank you, Citizens United.

NewsHounds posted about Fox News Licking Its Chops Over Upcoming Benghazi Movie on NewsHounds' Facebook page 2015-07-30 14:00:22 -0400
Other than a Bill Clinton sex tape, what could be a better Christmas present for Fox News?