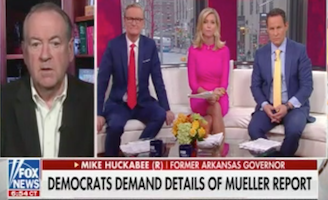 After repeatedly calling the Mueller investigation a "witch hunt," Fox News is weaponizing the Mueller report (which they haven't seen) in order to launch a real witch hunt against just about anyone deemed a non-supporter of Dear Leader Trump.

A legitimate news outlet would have recognized that Trump was not at all exonerated in Barr’s letter summarizing the Mueller report. Plus, the Mueller investigation landed 34 indictments, including six members of the Trump campaign, all but one of whom (Roger Stone, awaiting trial) within the U.S. jurisdiction have pleaded guilty or been found guilty.

But despite not having read the report, Fox weaponized it to wreak vengeance against those who are not as loyal to Dear Leader as the Trump TV Administration demands.

On March 25, 2019, the day after Barr released his suspicious summary of Mueller's findings, Media Matters found an astounding number of segments promoting investigations into those non-loyalists. From the Media Matters report:

Fox News aired 118 segments about the Mueller probe that day, and 58 of them -- 49 percent -- mentioned the possibility of future investigations against those involved in the probe or perceived to be against Trump; 26 of those segments featured someone specifically endorsing additional investigations.

Statements noting Republicans’ desires to investigate the origins of the Mueller probe were common refrains on Fox News, with Fox & Friends’ Steve Doocy asking viewers, “Is it time to investigate the investigators?” On Fox & Friends First, co-host Heather Childers asked, “Should the Obama administration, should Hillary Clinton now both be investigated?” Her guest, attorney Jenna Ellis, responded, “Absolutely.” On Fox & Friends, Fox contributor Mike Huckabee claimed there was an “attempted coup d’etat” while demanding that Republicans “counterpunch hard” by investigating the Justice Department and FBI.

These are dangerous times, folks. Whatever else you do, you must do everything you can to unseat Trump/Pence in 2020. For proof, watch Huckabee demand investigations into Obama, Rice, Brennan, Comey, McCabe, and others below, from the March 25, 2019 Fox & Friends, via Media Matters.

Kevin Koster commented 2019-03-27 13:48:52 -0400 · Flag
Ellen is correct in her most important point, and we really must stress it: It is CRUCIAL that everyone show up to vote in 2020, particularly in the swing states like Michigan, Wisconsin, Ohio, Florida, Pennsylvania, etc. It is CRUCIAL that people show up even in potentially purple states like Texas. If Democratic voters stay home in 2020, like they did in the swing states in 2016, and like they did in Texas, Georgia, Missouri and Florida in 2018, they will be giving Mike Pence another 4 years to damage this country. There is NO EXCUSE for anyone to stay home in 2020. Period. Full Stop.

John’s point is well taken, in that angry Right Wingers are doing a major victory dance today when we are still over 19 months away from Election Day. I wouldn’t be so sure if I were them. On the other hand, I don’t mind that they are this overconfident. It’s causing them to make bizarre choices – like openly attacking the ACA and gloating about it, like the brazen attempt to defund the Special Olympics while putting that money into private charter schools. Nothing these idiots are doing will appeal to the 70% of this country that does not support the Pence White House. So the more they ramp up their hostility, the more they motivate Democratic voters across the country to show up and vote them out.

Truman is correct to note that NOBODY has seen the actual Mueller report. Barr’s opinion about the report is loaded with fishy legalese that indicates the actual report is extremely critical of the behavior of the Trump campaign and the Pence White House – when we finally see it, I have a feeling it will note the obvious behavior by Trumpers across the campaign that was not only seedy but flirting with illegality in multiple areas. We’ll have to see the actual report to know the details, but the Right Wing has no basis for their proclamations this week.

Keep in mind that the Right Wing is only pushing this narrative about the Mueller report because they want to drown out the actual news when it finally comes out (provided that Pence doesn’t just bury it, as is quite possible). So that if the report is released on a Friday in August or September, the Right Wing will have already spent 6 months building up the story that it “totally exonerated” the Pence White House, and that narrative will already be set in stone for the Right Wing audience.

Regarding the threats now coming from Fox News and the Pence White House about launching criminal charge hunts against the Clintons, the Obamas and everyone else they hate – I’d take those extremely seriously. Donald Trump doesn’t think in terms of long range ideas or the larger good. He’s a child. He thinks in terms of who he thinks has wronged him and he loves the idea of revenge. Based on Barr’s history and his current behavior, I’m expecting to hear about a new Special Counsel fairly soon. If the Pence White House gets its way, you’ll see perp walks of both Bill and Hillary Clinton in time for the 2020 DNC Convention. I had expected these to happen much earlier in Pence’s acting presidency, but they would serve a greater propaganda purpose by happening during the campaign next year.

John McKee commented 2019-03-27 06:10:30 -0400 · Flag
I loved the edict from one of Trump’s minions to all news networks that they should no longer allow Schiff, Swalwell, Nadler and several others on their airwaves.