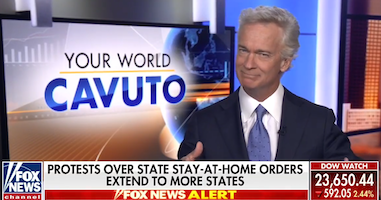 Fox News’ Trace Gallagher was either shockingly ignorant or else was deliberately misleading viewers in a report about the “reopen” protesters that falsely painted them as a big, grass roots movement.

As The Washington Post reported in a deep dive, “The activism is often organic and the frustration deeply felt, but it is also being amplified, and in some cases coordinated, by longtime conservative activists, whose robust operations were initially set up with help from Republican megadonors.”

Perhaps more importantly, a large majority of Americans disagree. Most Americans worry stay-at-home orders will be lifted too soon.

To his credit, host Neil Cavuto expressed skepticism and concern about the protesters’ methods. But he, too, failed to mention either the astroturf or the public sentiment. Before throwing to Gallagher, Cavuto said, “What happens in these protests as has happened in Minneapolis, happened in Michigan, happened in Virginia, happened in North Carolina, is that sometimes that they miss their own mission here by doing the kind of things that prevent danger or health hazards themselves, that is congregating too close together.”

After Gallagher’s sympathetic report on the protests, Cavuto asked a good question: “Do a lot of these folks feel emboldened by the president who says that’s their right and liberate one city, one state after another, that he’s actually got their back?”

“They do,” Gallagher replied. “I mean, you talk to these people and they believe that this is their right to be able to go out and say enough is enough.” He concluded by explicitly painting the protests as grassroots and popular: “We find that people are willing to play by the rules and social distance, they know it’s the right thing to do. But when they believe that overreach is happening and governors are not listening to their demands to reopen the economy, that’s when you have this bubble up across the country.”

Cavuto closed the discussion by saying, “Great reporting as always.”

You can watch Fox’s “straight news” distort the truth on a matter of life and death below, from the April 20, 2020 Your World.

I haven’t watched Fox News today but their web site is following a predictable course. Some headlines.

“Media erupt over Trump comments on disinfectant as coronavirus cure: Here’s what he said”
“White House accuses media of taking Trump ‘out of context’ on disinfectant comments”
“Trump, officials suggest coronavirus is weakened by sunlight and humidity”
“Dr. Oz on state plans to reopen, new research on how COVID-19 reacts to light, heat”

So it was the media’s fault all along! The White House declares Trump’s theories correct (by downplaying/ignoring that little in the body bit) and Fox News brings on an expert whose credibility is beyond question, Dr. Oz, to prove it! Take that you libruls! End of story!

Oh, and as I predicted, Steve Doocy in the Dr. Oz segment did ever so briefly mention the injection of disinfectants being toxic before very quickly moving on (we’re talking seconds, folks). Dr. Oz spend all of 2 or 3 seconds glossing over it. So now Fox can say they mentioned it.

Bemused commented 2020-04-24 10:16:45 -0400 · Flag
CNN’s “New Day” show aired a split-screen clip where viewers could watch Dr. Birx’s face as President Trump (aka self-appointed chief medical officer of the USA) explains to her (as a qualified scientist might do) how important it is to experiment with the injecting of coronovirus patients with disinfectant or getting sunlight into patients’ bodies to kill the virus.

Dr. Birx looked stony-faced down at her hands demurely held in her lap. How sad to recall that she used to be in charge of the department doing HIV research and monitoring.

Eyes On Fox commented 2020-04-24 08:51:03 -0400 · Flag
Bemused, I’m hearing polls were showing – before Trump’s latest COVID-19 miracle cure – only half of Republicans had a lot of faith in his coronavirus response. I doubt even the sycophantic Trump parrots at Fox News will champion Stable Genius’ latest inspiration.

I expect TrumpTV™ will briefly mention it on a non prime time news segment once or twice just so if they’re accused of never covering it they’ll have a ready clip. The context will be to poo-poo it as a momentary flub that the librul Trump hating media is obsessing over. End of story.

One funny side note. Here’s a tweet by the makers of Lysol that should never had to be made. Thanks so much for it Dear Leader!

The vast majority of those pro-opening gatherings were small to tiny, but one wouldn’t know that from the coverage on Fox(not)News.

Bemused commented 2020-04-24 04:40:59 -0400 · Flag
Drinking bleach or injecting sunlight (?!?) into a body infected by COVID-19, really sounded credible unless one recalls that this statement came from a totally unqualified person who has – on over 18,000 occasions – lied outright or misrepresented the facts. In writing, too.

Eyes On Fox commented 2020-04-23 22:26:09 -0400 · Flag
Well, now that Trump has come out with the sure fire cure of drinking bleach we can Liberate America! That is if MAGA COVIDIOTS don’t hoard it with their stash of guns and bullets.

Eyes On Fox commented 2020-04-23 15:49:09 -0400 · Flag
All those reflexive COVIDIOTS who ran out to protest because Dear Leader tweeted three liberate states messages are going to get whip flash now that’s he’s backtracking bigly. He just told Georgia to not lift its restrictions yet.

Risk your life for Trump and die for nothing.