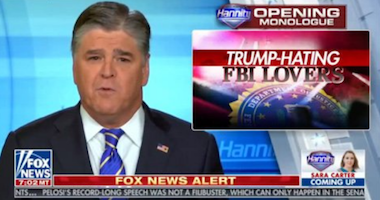 Nobody on Fox News prime time talked about the sudden resignation of White House Staff Secretary Rob Porter after it was revealed he had physically abused his two ex-wives. But Laura Ingraham did find time to criticize Sports’ Illustrated #MeToo campaign for being too suggestive.

If you don’t get all your news from Fox News, you probably already know the very damning details about Porter, a key Trump aide, and how the Trump White House excused and/or overlooked his behavior. But let’s go over it for the record. As Politico noted, White House Chief of Staff John Kelly said he was “shocked” by the abuse allegations after initially standing by Porter. Kelly’s “shock” came after photographs were circulated of Porter’s first wife with a black eye. But Kelly already knew about Porter’s history:

A senior administration official told POLITICO earlier Wednesday that Kelly and other top White House officials were aware of the allegations, including [a] 2010 protective order [against one of Porter’s wives], weeks and in some cases months before they were made public.

The allegations held up Porter’s application for a security clearance, the official said, adding that Porter had been working with an interim clearance. Both of his ex-wives reportedly told the FBI about their experiences with Porter.

Yet as late as Wednesday afternoon, Kelly issued a statement to the Daily Mail praising Porter:

“Rob Porter is a man of true integrity and honor, and I can’t say enough good things about him. He is a friend, a confidante and a trusted professional,” Kelly told the paper. “I am proud to serve alongside him.”

I can just imagine the non-stop squawking on Fox about such a thing had it happened in a Clinton or Obama White House. But since it happened under Dear Leader Trump, mum’s the word on Trump TV, at least in prime time Wednesday night.

There was nothing about it on Tucker Carlson Tonight: 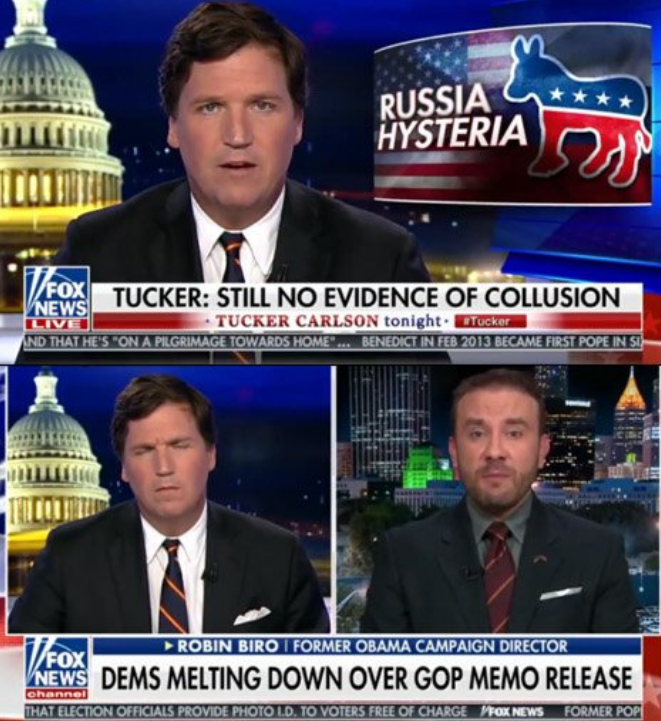 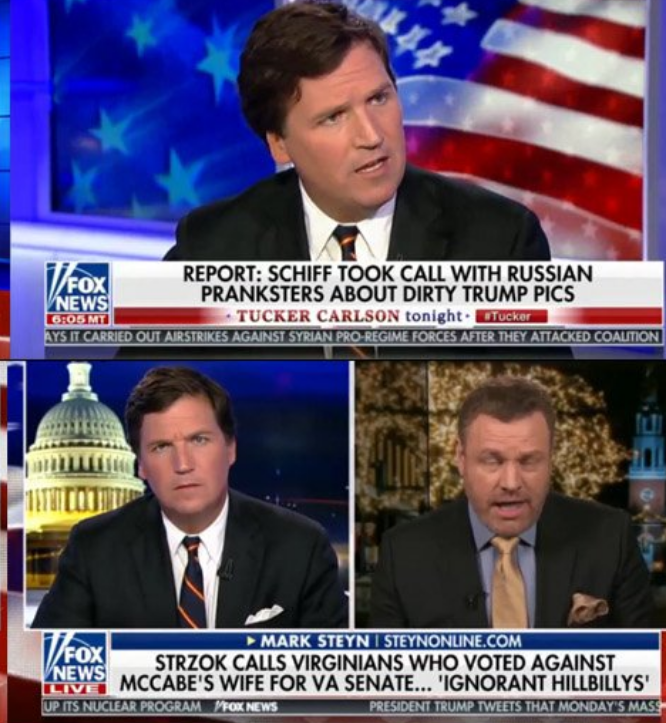 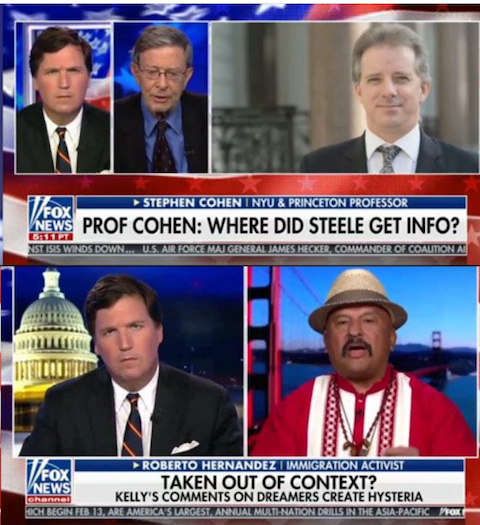 Of course, there was nothing about it on Hannity: 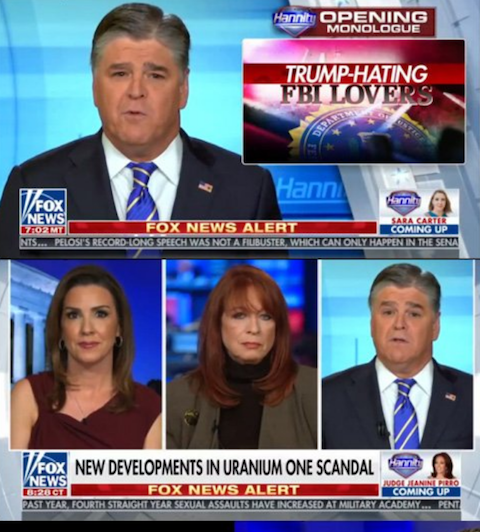 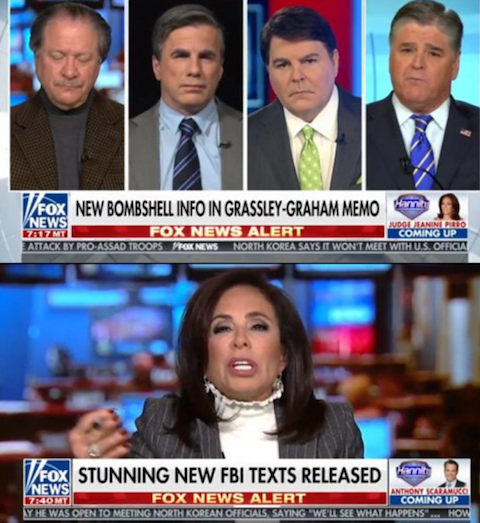 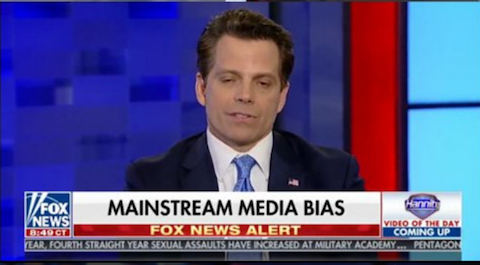 Nor on The Ingraham Angle: 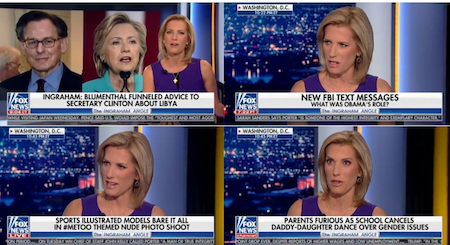 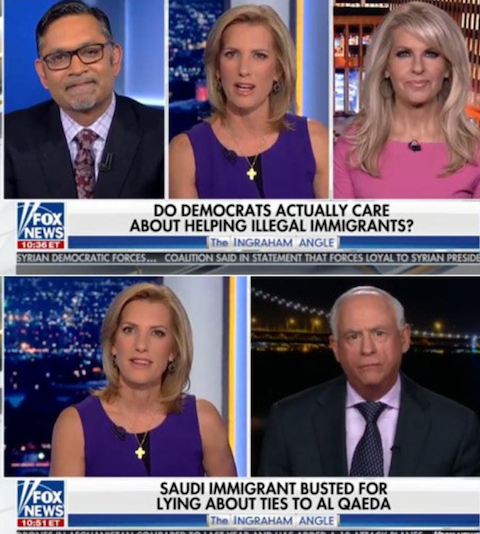 Don’t bother to look on FoxNews.com right now, either. 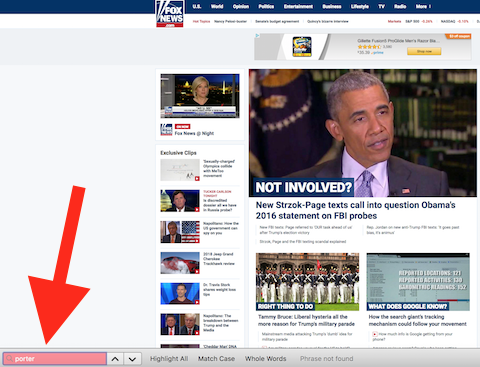 And yet, Inraham Angle host Laura Ingraham aired an attack on the #MeToo movement. Watch it below, from the February 7, 2018 The Ingraham Angle, via NewsHound Richard (who also gets credits for all the screen caps of the shows):