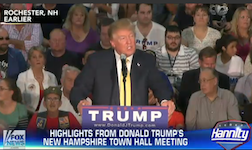 There’s been quite a backlash over Donald Trump’s failure to correct a questioner who said, “We know our current president” is a Muslim and “not even an American.” But on the Hannity show, it’s as if that embarrassing-to-Trump moment never happened.

During a town hall Q&A yesterday in Rochester, New Hampshire, Trump not only failed to correct the birtherism, he seemed to give the meme credibility. Twice.

During that event, on unidentified man said, “We have a problem in this country — it’s called Muslims," adding, "We know our current president is one. You know he’s not even an American,” the man added. “That’s my question, when can we get rid of them?”

A second Trump supporter endorsed the first man’s claims during his own moment in the question-and-answer session.

“I applaud the gentlemen who stood and said that Obama is a Muslim born abroad,” he said.

“Right,” Trump replied before moving on to the next questioner.

You can watch the first exchange in the first video below.

In an interview with Trump last night, Sean Hannity began by playing “some of the highlights” from the town hall. We saw Trump saying, “I love the vets. …In leadership, I win like forget it. Not even a contest.” And “We are gonna build a wall at the border.” And “We’re gonna do question and answer. You can make ‘em vicious, violent, horrible questions.”

Yet we never saw those birther questions.

After the “highlights,” Hannity immediately started gushing over Trump. The first "question" was, “You definitely get the best and funniest post-debate tweet award.” The tweet was that CNN got their highest ratings in history with its debate Wednesday night. “Will they send me flowers & a thank you note?” Trump had asked.

Trump has a long history of discredited birtherism and promoting claims that Obama is a Muslim. And Fox News has been there to help - with special help from Sean Hannity.

The Hill also noted that in the wake of criticism from both Democrats and Republicans, Trump has canceled a major campaign appearance today, claiming business reasons. One show he’ll never need to hide from is Hannity.

Although The Kelly File did cover this in the hour before the Hannity show, with Megyn Kelly appropriately noting the truth, Fox should have insisted that Hannity do so, too.

Watch Fox allow Hannity try to rewrite history below, from the September 17 show.