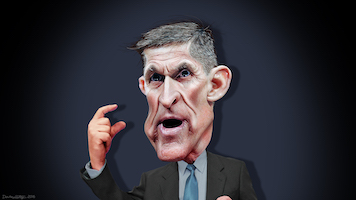 It turns out that, just like Trump, Fox News is more interested in Michael Flynn than the pandemic sweeping across this country and killing thousands of Americans.

From The Washington Post’s Philip Bump:

Closed-captioning data compiled by the Internet Archive and analyzed by GDELT show that, in recent days, Fox News and Fox Business have mentioned Flynn and the FBI more often than the virus (as either “virus” or “coronavirus”).

It wasn’t the first time that the two Fox networks talked about Flynn and the FBI more than the virus. When notes and emails documenting the FBI’s interview of Flynn were released late last month, both networks prioritized discussion of those documents over the virus. On April 30, Fox News mentioned Flynn about twice as often as the virus. On May 1, Fox Business mentioned Flynn and the FBI about twice as often as well.

Bump noted that Trump retweeted Fox loudmouth Dan Bongino’s attack on CNN’s Brian Stelter after he ripped right-wing media for treating the Flynn story like it’s a bigger deal than the coronavirus. Ironically, Bongino accused Stelter of “hoping to distract you” from the story about the Department of Justice dropping charges against Flynn, despite his two guilty pleas. In fact, it looks a lot like Trump and Trump TV are trying to distract from the administration’s coronavirus failures with news about Flynn.

In the clip that triggered Bongino and Trump, Stelter pointed out that the coronavirus death toll is like Katrina and like “the planes go into the towers every day.”

The thing is, we can be darned sure that if 80,000 Americans died of a terrorist attack or from a cause and with a solution that fit into pro-Trump messaging, Bongino and Fox would find nothing more important.

Instead, the Fox News culture of death is shrugging off lost American lives in favor of pro-Trump politics.

What Bongino can't stand is Stelter talking somberly about the deaths of so many thousands of Americans. Only a sicko would find that objectionable. Bongino, you may recall, was banned from Fox's news shows after he "became unglued" on one of them. Or maybe Stelter just touched a nerve and Bongino couldn't handle it.

You can see the tweet and the commentary that caused snowflake Bongino to melt down below, from CNN’s May 10, 2020 Reliable Sources.

CNN coffee-boy George Costanza is melting down because the conspiracy theories he has been pushing for years have entirely fallen apart. This lunatic has been totally humiliated and embarrassed and he’s lashing out hoping to distract you. What a pathetic soul this loser is 👇🏻 https://t.co/SEtKynDGOV

OT. The WH and Senate may have decided that an awful lot of people will be deeply grateful to them for enacting the fourth support package a month or so before the November elections. Meanwhile, millions of Americans will probably die, not only from the virus but also from lack of health coverage for other ailments and … from hunger.

This is happening in the richest country on the planet (!). To the dismay of the rest of the world. And to the embarrassment of anyone who once had any respect for the USA.