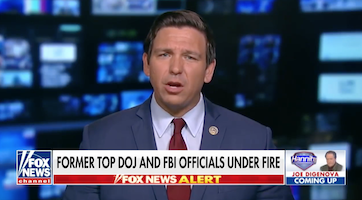 Rep. Ron DeSantis, one of Donald Trump’s most loyal lieutenants in the war on the Mueller investigation and a GOP gubernatorial candidate in Florida, is getting millions of dollars worth of friendly exposure on Fox News. That includes overt endorsements from prime-time hosts.

DeSantis is such a zealous opponent of the Russia investigation, it leads me to wonder what he’s so afraid it might uncover. Naturally, however, his obstructionist tactics on Mueller, coupled with demands to investigate Democrats Hillary Clinton and Debbie Wasserman Schultz, has made him a hero to Trump ... and to Fox News.

A devastating report by Politico found that “Since announcing his bid in January, DeSantis has been given frequent access to Fox’s best real estate — including Fox & Friends, Laura Ingraham, and the Hannity show — or been prominently mentioned across the network roughly 100 times, according to TV Eyes, a television monitoring service."

DeSantis declared his candidacy on January 29, 2018, which is 100 days ago. That means his favorable appearances and/or mentions amount to an average of one a day. That's worth more than $7 million, according to Politico.

Perhaps just as valuable, if not more, prime time Trumpers Sean Hannity and Laura Ingraham have specifically endorsed DeSantis on the air:

“I can’t more enthusiastically endorse and completely support your run,” Sean Hannity, the network’s leading Trump ally, told DeSantis in a January interview weeks after he announced his campaign.

“You have been one of the most stalwart supporters of this president,” [Ingraham] continued. “Which is why months ago I endorsed you.”

Putnam, on the other hand, has been frozen out. Politico noted, “A Fox News spokeswoman did not return a request seeking comment on why DeSantis is a regular guest or why Putnam has not been on the network this year.”

See how Fox is inserting itself into the Florida gubernatorial election below, via Politico.