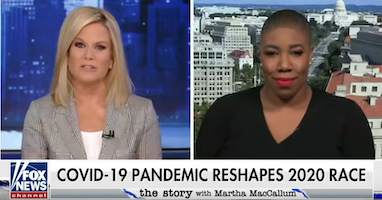 Biden campaign advisor Symone Sanders did a great job of pushing back on Martha MacCallum’s efforts to smear Joe Biden’s desire to reopen schools safely with “a real American would send kids back to school now!” propaganda.

MacCallum put her thumb on the scale in her introduction by asking, “So who will lead the way, who will put the fear into perspective and to restore, as FDR did in that speech, the American optimism that has always characterized this nation? That is the question that will be front and center, one of the very big questions, as this election heats up.”

Then she played a clip of Biden saying earlier in the day, “I have to start by speaking about what millions of Americans know when they wake up every morning with worry, anxiety and fear. We’re still a country in crisis.”

Funny how she left out all the parts where Biden talked about creating “high paying union jobs by building a modern infrastructure and a clean energy future,” which is what the bulk of his remarks were about.

But MacCallum wasn’t done with her thumb. Without playing any Trump clip for comparison, probably because his grievance-filled ranting and rambling in the Rose Garden that same day was hardly a vision of American optimism, she suggested that Biden would show the requisite can-do spirit if he would only push kids back to school, as Trump is doing. “When you look at those numbers about parents being so concerned to send their kids back to school. Should fear keep them from doing that? Does [former Vice President] Biden believe that these kids need to get back into the classroom this fall for a myriad of reasons?”

Sanders began by drawing a parallel to the reopening debate and called it “a false choice” between reopening schools or not. “This is about what’s safe,” she said.

“Everyone, including Vice President Biden, wants to ensure that our children are back in school, but it has to be done safely,” she said. Sanders added that Trump’s mandate to go back to school “is not a plan” and that testing, contract tracing, and working with governors and issuing guidance are needed.

MacCallum couldn’t point to any Trump plan, of course, so she interrupted and returned to her “Don’t worry, open schools” talking points. Other countries are doing it safely, she said, without pointing out that the countries Trump has cited have brought their numbers of cases down and have opened in a careful, gradual way.

Then, without offering any statistics for comparison, MacCallum suggested children are more at risk at home than in school.

MACCALLUM: I mean, you know, at some point, we need to say - and think about what’s happening with so many kids across America right now, anyway. Their lives being put in danger by other things, by other factors: their parents have to go back to work, some of them are in abusive homes. It’s been, you know, documented in ways that are truly scary. You look at the numbers of children and what they died from – the flu, suicide, homicide, which we’ve covered here a lot over the past few weeks.

You know, do you ever look at all of this and say this is shocking? That we have put ourselves into this position of being so hunkered down in this environment? When do we do know some of the things that help to keep us safe when we go out?

So the fact that we have record numbers of unemployment in this country,  … we don’t know the state of things and we don’t have real plans to send our, from the federal government to send kids back to school.

Perhaps because she was unable to cite any plan, MacCallum went to Plan B, the right-wing dream of privatizing public schools:

MACCALLUM: I want to ask you something about the agenda here overall. In terms of charter schools, because one of the things that’s been suggested is that if a school does not want to reopen, an individual taxpayer should be able to use the money that is allocated for their child to make the choice to send them to either a charter school that is opening or a religious school in their area. Why shouldn’t a parent be able to do that, or do you believe that they should?

Sanders deftly went back to going on offense with her own messaging, rather than playing defense, which is always a good thing for Democrats to do on Fox.

SANDERS: Martha, I am not sure what plan you are referencing but I can tell you that we have yet to see a plan from this administration on how to safely reopen schools. We have yet to see the president partnering with governors and talking to folks like teachers, putting a plan together with them.

Sanders went on to note that Secretary of Education Betsy DeVos hasn’t put out a plan, either.

After pointing out that Biden’s wife is an educator, Sanders reiterated, “He believes that this is a false choice. It’s not do we keep kids at home and beat the virus or do we send them back school. The question is, how can we go forward safely with a plan that protects, not just the students but the teachers, the custodial staff, the folks who serve the lunch.”

Well done, Ms. Sanders. I hope some Democratic strategist not connected with the Biden campaign goes on stronger offense and challenges Fox’s efforts to distort the choice. But Sanders’ job is to promote Biden, not fight with Fox, and I think she did that very effectively.

Do you agree? You can watch Sanders and MacCallum below, from the July 14, 2020 The Story with Martha MacCallum.