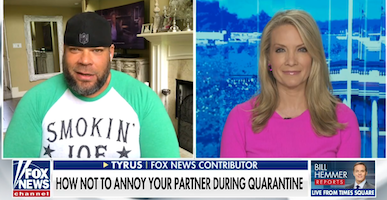 We do not know the truth about Fox host Britt McHenry’s allegations that colleague “Tyrus” sexually harassed her but we do know that trotting him out as a relationship expert during the coronavirus social distancing is extremely tasteless.

As you may recall, Fox Nation host Britt McHenry (recently diagnosed with a brain tumor) has been battling Fox over its handling of her allegations of sexual harassment by George Murdoch, known as Tyrus. A Vanity Fair article about McHenry’s lawsuit against Fox describes some of the behavior she said the network has not properly  addressed:

In her suit, McHenry says Murdoch’s inappropriate behavior began shortly after their first meeting in August 2018 at a dinner hosted by the network. McHenry and Murdoch were slated to cohost Un-PC, which would launch in November 2018. In October 2018, according to the suit, Murdoch began sending McHenry sexually charged text messages. “I love pony tails and braids you look amazing and itʼs a real turn on not that you care but I love it,” one read, according to the lawsuit. Another read, “I’ll show you what it mean to be bad Britt Mc Henry”//Dick pic coming in 5 sec!!!!” Murdoch allegedly sent the following messages over the course of two months: “I love your legs”//“Fuck them your beautiful I love that picture”//“Is it creepy how I look at you ???”//“FYI you’ll need those legs to escape from me in Montana”//“I please especially on your knees hotness”//“I love the fact your always working if we ever had sex I feel like after an orgazzum you say speaking of feeling good did see the story on the puppy rescue we should do a segment on it hand me my phone.”

Vanity Fair also notes that Fox hired a private investigator who concluded McHenry had not been sexually harassed and that Tyrus continues to appear regularly on Fox News. He is also a Fox Nation host, as host Dana Perino introduced him in the video, below.

For argument’s sake, let’s say Fox’s investigation arrived at the right result. Couldn’t the network find someone else to hold up as a model husband?

On Friday, The Daily Briefing hosted Tyrus for a discussion a lower-third banner described as “How not to annoy your partner during quarantine.” Fortunately, the segment was mostly about Tyrus exercising with his wife and criticizing the Malaysian government for telling wives not to nag their husbands. But still…

You can watch the segment below, from the April 3, 2020 The Daily Briefing.

It’s difficult to see people argue there was little time to react to Coronavirus. Since I work in media, I’ve known how deadly it was in China since late November-December. US didn’t restrict travel, or take preventative measures. If we knew, govt knew.