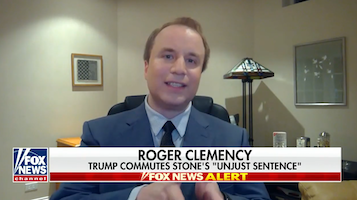 If ever you needed proof that Fox News conservatives know darned well just how corrupt Donald Trump is, watch two of them say nothing when a guest likened him to a Mafia don and declared that the commutation of Roger Stone’s sentence demonstrates that Trump “does not care about the rule of law.”

In a discussion about Stone's commutation, it was telling that the best conservative John Yoo could say about it was that Trump had the right to do it. You may recall that Yoo is the author of the Bush torture memos and, more recently, helped Laura Ingraham smear Lt. Col. Alexander Vindman as a traitor. In other words, he's no RINO.

“The Constitution does give the president an unlimited power to pardon," Yoo said, which has nothing to do with why people are outraged over Stone.

Before long, even Yoo conceded, “I don’t know if this is the best use of the power as a matter of policy.”

The other guest, Bradley Moss, was already one of my favorites. And then this:

MOSS: He has the Constitutional authority and John and I agree on that. But this was a brazen, corrupt abuse of that pardon power.

You’ve gotta give Donald Trump credit here. He has boldly gone where virtually no president has ever gone before. He is acting like a little Mafia don. He has said this is my loyal foot soldier. I don’t care what my Justice Department said. I don’t care what the jury said, I don’t care what the judge has said. This guy covered up for me, this guy took the fall for me and he didn’t rat me out. He didn’t turn state’s evidence. So I’m going to reward my little foot soldier here and commute his sentence so that he can go about his business despite the fact that he committed these white-collar felonies. Because in the end, Donald Trump does not care about the rule of law, he cares about applying it to other people and protecting his own family and his friends.

That's quite an accusation, especially about the guy sitting in the White House and running for re-election. Yet, nobody challenged Moss. Host Shannon Bream asked Yoo, “What about that? Listen, every president who commutes or pardons someone, there is some controversy in some of the cases that they do.” Which was an extremely euphemistic way to describe what Moss had just alleged about Trump.

“They do it sometimes very carefully and on the way out the door,” Bream continued. “That wasn’t the case here.” Then she asked Yoo to respond to Moss’ allegations, but not before she misleadingly claimed that the Mueller investigation (which Stone’s charges arose from) “didn’t show collusion.”

But Yoo did not respond to Moss. He reiterated, “I don’t know if this is the best use of the pardoning power." He continued, "I do think President Trump, himself, realizes that because he didn’t actually pardon Stone, he commuted his sentence which means that Stone is still a felon, he’s still been convicted by a jury.”

I suspect Moss would have had more to say on the subject but oops! Time was up. I’m sure it was just unfortunate happenstance that Yoo had the opportunity to speak twice and Moss only once.

Meanwhile, you can watch Moss level some very serious charges at Trump that neither Bream nor Yoo wanted to argue against, from the July 10, 2020 Fox News @ Night.

The link below from the Atlantic Magazine points out that (previously unknown to me) a President’s power to pardon/commute is limited in cases related to impeachment. The Atlantic’s is a far deeper critique than the tepid condemnation of the commutation expressed by the National Review editors. Reminiscent of Yoo, the NR editors found the commutation “embarrassing” for reason of taste, not law. The editors conceived of no legal remedy, which one would think would be appropriate for what the National Review headlined as an “indefensible” act. This is one more example of how the Right’s deal with the devil has progressively desensitized them to Trump’s psychopathology. They still treat it as a bug, not a feature; as a superficial blemish, not as the core-rot that it is.
https://www.theatlantic.com/ideas/archive/2020/07/traditional-interpretation-pardon-power-wrong/614083/

Also, FWIW, I don’t think Yoo is a paid contributor but a frequent guest.