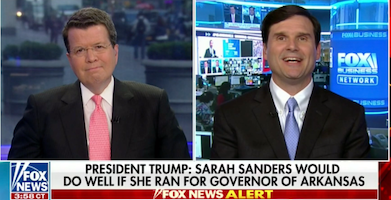 Despite Sarah Huckabee Sanders’ shocking record of dishonesty and hostility toward the press, Fox News not only saluted her when her departure from the White House was announced yesterday, a guest promoted her as a great future governor for Arkansas.

It’s hard to overstate just what a disgrace to the office and to the country Huckabee Sanders has been. She not only routinely lies to the public, she admitted to lying when she was under oath to Mueller investigators – then reverted to the same lie once she was out of danger of perjury charges.

Furthermore, she was hostile to the press and then stopped holding press briefings altogether. The Columbia Journalism Review wrote of her tenure: “In her two inglorious years on the job, Sanders barred reporters who asked tough questions; promoted Trump’s bogus “fake news awards”; fell in line with the president’s anti-press, 'enemy of the people' rhetoric; and routinely disparaged the intelligence and integrity of the journalists in the White House briefing room.” CNN’s Brian Stelter noted, “Sanders shortened the on-camera briefings and then did away with them altogether. Her most recent quarrel with the press in the briefing room was back on March 11 — and that session was only 14 minutes long.”

But on Fox News’ Your World show yesterday, Sanders was depicted as having done such an awesome job, she’d make a great governor of Arkansas!

Guest James Freeman, of the Wall Street Journal, said about Sanders, "I think she served the president honorably,” as if her job was not to serve the American people who pay her salary. “You could argue she had, that job was toughest under the Trump administration than it's ever been in terms of the hostility of the press." Freeman added euphemistically that Sanders "eventually ended up kinda cutting down those daily briefings."

He continued gushing, “There are definitely some big shoes to fill there. She’s done a tough job and done it well.”

Rather than note how she stopped doing her job altogether, host Neil Cavuto opened the door for Freeman to endorse Sanders for governor of Arkansas. Cavuto pointed out that Donald Trump had said he hoped she’d run for the position. “How likely you think that is?" Cavuto asked.

"She's got a lot of the ingredients. She is unflappable, she’s been in the line of fire, she knows how to deal with the media, she is now very well-known thanks to her role in the White House," Freeman said.

Nobody mentioned that the current governor’s term runs until 2023.

Does anyone doubt that a Fox News contract is probably in Huckabee Sanders’ more immediate future?

Watch Fox whitewash Sanders’ disgraceful job performance below, from the June 13, 2019 Your World.

Kevin Koster commented 2019-06-17 13:43:54 -0400 · Flag
Sarah Huckabee Sanders is undoubtedly hoping to get a cushy spot at Fox News, just like Dana Perino did before her. And I do think she will get paid a bunch of money to show up as a commentator – likely with her dad whenever possible. But she won’t be getting an anchor position any time soon. Simply because Fox News prefers its female anchors to look like they just walked in from winning the Miss America pageant.

Personally, I don’t have any opinion on what Sanders looks like – it’s her actual work that has condemned her to my mind. She has encouraged the worst instincts in people across this country and we are the poorer for her having been allowed to hold a position she had neither the competence nor the character to fulfill.

But Fox News does have opinions on what they want their female personalities to look like. Or did we just imagine all the sexist games they’ve played with the table fronts that get pulled off when the women are sitting, and all the behind-the-scenes behavior that only partly has come to light?

mlp ! commented 2019-06-14 23:20:48 -0400 · Flag
Arkansas ranks anywhere from 43rd to 47th in rankings of intelligence, depending on the measurement method. This state of geniuses also ranks about 42nd in median income.
Therefore, the chances of another Suckabee being elected should very good.