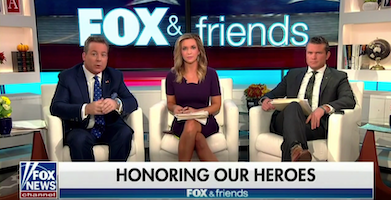 Donald Trump snubbed U.S. veterans yesterday by failing to join a ceremony at the Aisne-Marne American cemetery in France, ostensibly because of rain, but Fox host Katie Pavlich said, with a straight face, that Trump was “not able” to go.

Although Trump dubiously claimed the rain made it impossible for him to attend the remembrance, The Washington Post noted that Chief of Staff John F. Kelly and Gen. Joseph F. Dunford Jr., chairman of the joint chiefs of staff, didn’t let a little rain stop them. And it was only a little rain. According to AP, Paris was “covered in clouds with drizzling rain.” The Post has a photo of Kelly at the cemetery, looking quite unrained on.

Former Deputy National Security Adviser Ben Rhodes didn’t buy it. He tweeted yesterday, “I helped plan all of President Obama’s trips for 8 years. There is always a rain option. Always.”

According to The Post, the cemetery has 2,288 grave­sites honoring those who died in World War I's ferocious Battle of Belleau Wood, including many Americans. The names of 1,060 more Americans who went missing and whose bodies were not recovered are engraved on the walls of the site.

It’s not hard to imagine how Fox would have attacked Obama had he skipped such a visit. But since it’s Dear Leader thumbing his nose at our veterans – on Veterans Day weekend, no less! – Pavlich was all about promoting the dubious excuse as truth:

Actually, Trump went to a different cemetery today, as Pavlich later acknowledged. Also, the White House changed his excuse – after a mocking backlash on Twitter. Press Secretary Sarah Huckabee Sanders issued a statement saying, “President Trump did not want to cause that kind of unexpected disruption to the city and its people.”

Just a few weeks ago, Trump refused to honor the Pittsburgh mayor’s plea to delay a trip to that city in order to avoid further strain and disruption in the immediate aftermath of the Tree of Life synagogue shootings.

Who would believe that “America First” Trump suddenly cares about disrupting a city in France after not caring about it in an American city?

Why, Fox News and its sheep surely would.

Watch Pavlich pretend that Trump didn’t just give an FU to American veterans below, from the November 11, 2018 Fox & Friends.

(Again, I apologize for the audio. I’m waiting for a technical support response from my usual video capturing software which suddenly failed after I installed Mojave.)

Eyes On Fox commented 2018-11-12 09:08:35 -0500 · Flag
Trump’s isolationistic and nationalistic policies have alienated our best allies. So the narcissistic man-child is acting like a kid who’s refusing to come out and play. His midterm disaster doesn’t help because European leaders are no longer afraid of him

The Donald is a foreign relations disaster. Not only is our European relations a scary mess, it was just reported North Korea is busy gathering more nuclear material and building more missiles. Time for the dumbass to get his head unstuck from his ass and quit boasting he deserves the Nobel Peace Prize.

Fox News is laughable in their clumsy attempts to wallpaper Trump’s incompetencies.