On Fox & Friends, Trump Had Nothing More Important To Discuss Than His Michael Flynn Victory Lap For 20 Minutes 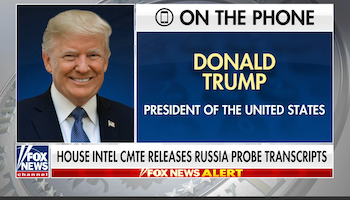 As devastating unemployment statistics were released and the death toll from the coronavirus pandemic continued climbing, top of mind for Donald Trump and his Fox & Friends sycophants was his victory lap over DOJ charges dropped against Michael Flynn and the "Russia hoax."

In case you missed it, the April jobs report that came out this morning showed “the worst month for American workers at least since the Great Depression and possibly in the history of the nation,” The New York Times reported. The U.S. remans the world leader in COVID-19 cases and deaths. More than 2,200 Americans have died from the virus since yesterday.

But all that could wait 20 minutes while Trump and Friends slobbered over Attorney General and Trump toady William Barr dropping charges against Flynn.

Cohost Steve Doocy’s face lit up when Trump called into the show. Doocy's first question was, “So it was jaw-dropping announcement that the Department of Justice dropped the case against Michael Flynn. You've been talking about a Russia hoax for years. Is this proof you were right?”

That was all the prompting needed for Trump to ramble and whine ad nauseum with grievances we’ve all heard before, such as “perfect call” to Ukraine, “fake dossier,” “fake news,” “sleepy Joe Biden,” etc. He also added vague threats of retribution.

There was nothing but love and approval from the Fox Friends.

TRUMP: Most people knew it from the beginning, and they knew it was a total hoax, a made up story, a disgrace to our nation, made it impossible for us to deal with other countries including Russia because of what they were doing. You can’t deal like that. … They made it a very dangerous situation. These are dirty politicians and dirty cops and some horrible people and hopefully they’re going to pay a big price someday in the not too distant future.

The cohosts not only went along with the fiction, they prompted for more grievances. Apparently, they also thought nothing else was more important to discuss.

BRIAN KILMEADE: It seems as though not only are people not contrite about this, it seems like Adam Schiff and company have gone out of their way to say William Barr is to blame because he’s just doing your dirty work, that he lied under oath, and he got what he deserved. What’s your answer to that?

TRUMP: So Schiff is a crooked politician, crooked as can be, probably one of the worst I’ve ever seen and I’ve seen some beauties. A liar, he’s a terrible person, he’s terrible for our country, he shouldn’t even be allowed and it’s only because of immunity that they’re given when they’re in the halls of Congress, Brian.

He made a speech on the impeachment hoax where he quoted me, he went about quoting me, talking about quid pro quos eight times, and there was none. The call was a perfect call. … It was a disgrace. … I got the president of Ukraine and said you mind? He said no, you go ahead and do it and by the way we did absolutely nothing wrong and there was no pressure and this guy got up there and he lied and lied and I said, wow we can sue him for fraud and then they said no sir because he did it in the halls of Congress he’s got immunity.

Cohost Ainsley Earhardt did her part to provoke more. She read a quote from former Director of National Intelligence James Clapper saying he never saw “direct empirical evidence that the Trump campaign or someone in it was plotting, conspiring with the Russians to meddle with the election.”

TRUMP: “He gets a couple of bucks from CNN and Jeff Zucker and that den of thieves over there. They tell them over at CNN and MSDNC, they tell them exactly what to say. They say, this is what you’re going to say or we don’t want you on the show. You have people over there, you have people that go over there and if they want to say good about Trump they can’t get hired. …

Look at Congressman Duffy, look at different people that go. They go there, and they’re never on the air because they say good, but they clamp them down.

… I have nothing to do with Russia. I didn’t make a phone call for years and years to Russia nor did I receive any. They even checked phone messages. … Then [Clapper’s] under oath, where he goes to jail if he lies. He says no, I had no evidence, no, there’s no evidence about Trump. … Here’s a guy that’s purely lying. … If he did that testimony, and the following day went on CNN, he would say massive relationship between Trump and Russia. There is none. None.

If anyone thinks that he [President Obama] and sleepy Joe Biden didn’t know what was going on, they have another thing coming.

Trump kept up his unchallenged whining.

TRUMP: They tried to take down the president of the United States … before I even won. This was the fake dossier that was totally fake, and I got a little lucky because they couldn’t get the newspapers. The only thing I respect about the fake news media of which there is much, not all, I know some fine people that are journalists also, but largely it’s fake news. It’s a horrible thing, it’s a one sided, very hard. It’s the Democrats. I’m running against the news media and the Democrats, it’s a party, and a candidate that’s incompetent. … A big, big, crooked power.

Trump interrupted his bellyaching to boast about the totally unqualified, loyalist Richard Grenell as “doing a fantastic job as our number one person on intelligence.” Trump also saluted Barr for corrupting the DOJ on Trump’s behalf, saying we “owe a lot to” him and calling him a “strong, powerful, honest man.”

“He’s the opposite of Robert Mueller because you look at Mueller that was purely corrupt,” Trump continued.

Rather than challenge Trump’s hideous debasement of our institutions, Doocy suggested he slam the Obama/Biden administration. Trump was happy to comply.

DOOCY: Mr. President, what you described just a moment ago we've heard certain people say if that was true, what you just said a moment ago, that the previous administration tried to undo your presidency, that would -- that is the biggest political scandal of all time.

TRUMP: It is. … If that were a Republican president, I believe he and Biden - sleepy Joe was involved in this also very much - and other people around President Obama were totally involved.”

Trump also griped about former FBI Director James Comey as “a sick man,” “a stupid guy, he’s dumb as a rock, and he’s a sick guy, there’s something wrong with him.”

And back to the self-congratulations, with an assist from Kilmeade:

TRUMP: There’s been no president that’s been tougher on Russia than I have between the oil and the pipeline and all of the military. We’ve rebuilt our military. … We have a brand, new gorgeous military. We had nothing. We were depleted and we were --

KILMEADE: And you walked away from the missile treaty. […] They were cheating on it, and you called him out on it.

Trump went on to call former Attorney General Jeff Sessions “a disaster,” “very weak and very sad.” Trump claimed, “one of our greatest achievements” is “cleaning it up, meaning” the DOJ. “If you did a poll there I do very well in the FBI,” Trump dubiously bragged.

Finally, after 20 minutes, “tough journalist” Earhardt got around to the pandemic. Not to ask any meaty questions such as “how can you want daily tests for the White House but not for everyone else?” No, Earhardt pitched a softball: “Let's talk about coronavirus. What is your response? What's the status of our country right now?”

You can watch the three hosts slobber over the guy whose negligence has caused many thousands of Americans to die, with not one of them seeming to care much. It’s from the May 8, 2020 Fox & Friends.

Happy Mummy’s Day to all the Mums reading this (and their friends).

Trump is bitterly (and rightly, I believe) criticised for thinking only about himself. Disgruntled opponents to Trump should not be acting like Trump.

Bemused commented 2020-05-10 06:21:41 -0400 · Flag
To my mind, dropping the charges on anybody who actually confessed to those charges is what any self-respecting banana republic would do.

VOTE BLUE WHO MATTER WHO! The alternative is too terrifying to contemplate. Democracy has always been a game of negotiation and compromise. Those who refuse to play because their own views are not shared are acting the proverbial kid who leaves the field with the ball. Out of spite, not caring who may be hurt.

For those into military trivia, talking of fighting Hitler (and Mussolini), there were less than 65,000 American casualties (killed and wounded) in WWII fighting in the first 2 years (1/41-12/43) of the war. Dear Leader surpassed that in deaths alone in about 2 months. As of today there are 77,925 Americans dead of COVID-19.

scooter commented 2020-05-08 17:30:09 -0400 · Flag
Adam Schiff is about a billion times the man Chump will never be. Chump lies about everything except his desire to score with his daughter.