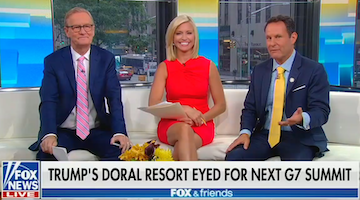 The three Trump toadies known as Fox & Friends were so eager to promote Donald Trump’s corrupt desire to line his pockets by hosting the 2020 G-7 at his own golf club, you would think they were in line for a commission.

Cohost Brian Kilmeade announced, “He would want to do it there anyway, whether he owned it or not. It’s just the perfect site.” Kilmeade never explained how he arrived at such a dubious conclusion.

Cohost Ainsley Earhardt beamed as she added: “He said they looked at 12 different sites and – why don’t we do it? We have the facilities!”

Cohost Steve Doocy chimed in, “And apparently, the Secret Service did inform the Doral, Florida police department two months ago that the resort was one of about a dozen potential venues for the summit.”

Doocy just forgot to mention, as did the other two cohosts, that there are serious security concerns. The Washington Post reported that “aides have pushed Trump to consider other sites for the 2020 summit that are more remote and easier to secure. The New York Times noted, “Its entrance, lined by palm trees, lies near one of the busiest intersections in Doral. Last year, an armed man opened fire on police officers inside the hotel lobby."

Instead, Fox & Friends played a clip of Trump giving an infomercial for the Doral. Calling the place, “such a natural,” he pitched its “series of magnificent buildings” with “very luxurious rooms,” its “magnificent views,” “incredible conference rooms,” and “incredible restaurants.”

“There’s nothing he said that wasn’t accurate,” Kilmeade raved, without saying whether he had ever been there.

“Then he added, each country can have their own villa!" Earhardt said excitedly. She raised a fist in a display of extra ecstasy.

“Yeah, it would be fantastic!” Kilmeade gushed. “Maybe there’ll be one for Russia.”

Eventually, the lickspittles got around to the little matter of Trump profiting from the event. Did they care about whether this violates the emoluments clause of the U.S. Constitution or the blatant conflict of interest? Heck no! The only reason they seemed to mention the matter at all was because the media has brought up that pesky problem.

“I’m sure the president has asked the lawyers hey, how could I donate this, how can we possibly work around it,” Doocy said dismissively.

Nobody mentioned Trump’s dodgy reporting practices that already avoid saying how much total revenue he has taken from foreign governments or providing details of how the “profits” are calculated. Nor did anyone mention the incalculable promotional value for a property that has been struggling.

No, Doocy said his “only concern” is the weather. “It’s pretty darned hot” in Miami the last week in August, he said.

“Hurricane season, too,” Earhardt pointed out.

But Kilmeade was not to be discouraged. “If you’re a world leader, people walk with you with umbrellas, number one, and then you do most of the stuff indoors,” he assured viewers.

Earhardt was not deterred either. “It would be a beautiful place, though, for world leaders to go and see what our country looks like and a beautiful representation. I’ve never been to Doral but I love Miami and I love Florida, it’s so green and beautiful, and the weather is usually nice at that time,” she chriped.

Watch Kilmeade, Earhardt and Kilmeade work to sell the Trump Doral for him below, from the August 27, 2019 Fox & Friends, via Media Matters.

Kevin Koster commented 2019-08-30 02:46:49 -0400 · Flag
The value of this website is that it has preserved for more than a decade the actual record of Fox News’ vicious conduct. It’s an extremely important part of the historical record. Because when we get the inevitable Right Wing attempts to play the “let’s brazenly rewrite history” game, more intelligent people will be able to instantly rebut the nonsense and show that Fox News was propaganda from the start. It will also be clear from the record that this was an attempt by the Right Wing to establish an alternative history, in the face of the actual facts.

I look forward to the parade of college courses, particularly in anthropology and sociology, that will wind up examining this trend from the Right Wing in the coming years. There’s something pathological about the issues that the Right Wing has long had with the truth, and something truly pitiable about their attempts to somehow declare the funhouse mirror of Fox News and Breitbart to be “journalism”.

Eyes On Fox commented 2019-08-29 11:18:56 -0400 · Flag
John, I think when I threw in the towel was back during the government shutdown. I forget the details but, essentially, Trump was caught lying – huge surprise – and Fox & Friends rather than ignore or refute the lie admitted with glee Trump had lied. They called Trump a “genius” (yes, that’s a quote) for lying to the American people because he outsmarted “Nancy and Chuck”. In their minds his “genius” lie had cornered them. I wanted to vomit.

Never before have I seen a ‘news’ organization heap praise on a president for lying to the American public (on a non-security matter).

John McKee commented 2019-08-28 20:18:53 -0400 · Flag
I’ve been on a similar trajectory to you, Eyes. For many years I watched Fox ‘News’, partly to keep an eye on what the Repuglies were up to, partly to point and laugh at the sheer stupidity of anyone who could take their propagandising seriously.

In the age of Trump, though, it just sickens me to witness the shameless depths they have sunk to. Thank the gods for dear Ellen giving us just enough to refresh our immune systems, but not enough to turn our stomachs.

Eyes On Fox commented 2019-08-28 07:51:18 -0400 · Flag
Ellen, the question is with Fox News is how far is too far? You’ve been documenting the fast slide of Fox News into the abyss during the Trump era. Is there an end to their mockery of actual journalism?

Just as a sanity check I revisited their homepage. The top story screams “Trump mocks NYT’s Bret Stephens: My resort doesn’t have ‘bedbugs,’ but he’s ‘loaded up with them!’” As you’d suspect, the article written by a Fox News staffer, is a 100% pro-Trump full force attack on a beg bug critic. It’s devoid of facts like any mention of the lawsuit Trump settled over bedbugs. For good measure at the top of the ‘article’ is an auto-run clip of Sean Hannity, serial liar Sean Spicer and Charles Hurt kissing Trump’s ass on the topic.

The net result is low information conservatives like the ones flooding your recent Tucker Carlson story who are incapable of intelligent debate. Just an emotional and often unfounded talking point or two. Probe further and they quickly disappear.

Here I’m so embarrassed for them it almost makes me nauseous watch this clip.

I’m not kidding when I say Doocy acts like he’s been hitting the Valium again.

Oh, and at the risk of pushing sexist stereotypes, Earhardt saying “That means more traffic down there, less here in New York!” is the most air-headed thing I’ve heard in a long time.