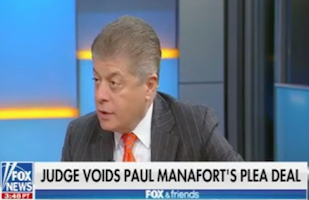 In case you’ve lost track of what Manafort was up to, what with so much reporting on his lies and financial fraud, it looks very much like he is the Russia collusion “smoking gun.” How or whether he interacted in that regard with the Trump campaign is yet to be revealed. But there is some unmistakable smoke coming from him. Jonathan Chait explains (my emphases added):

Manafort deceived prosecutors about a [2016] meeting he had with his former partner and active Russian agent, Konstantin Kilimnik. At this meeting, the two discussed a peace plan to resolve Russia’s invasion of Ukraine, the top Russian foreign policy priority. Manafort passed on polling data to Kilimnik, data that was “very detailed” and “very focused,” not just some topline numbers. And according to prosecutors, Manafort did all this in hopes of getting a pardon from President Trump.

Here we have, in this case alone, every single element one would need to establish collusion. There was a meeting between Trump’s campaign manager and a Russian operative; the discussion of something Russia would gain from a Trump victory (a favorable Ukraine settlement); the exchange of information that would assist Russian campaign intervention (polling data that would allow Russia to target its social-media attacks). Also, they left the meeting place via separate entrances. This isn’t merely suspicious. It’s a scene from The Americans.

Not surprisingly, this point was overlooked by the Trump lickspittles on Fox & Friends this morning. Instead, after a federal judge found that Manafort lied to prosecutors, the Trump Friends ignored questions as to why Manafort and so many other Trump associates have lied about contacts with Russians. Instead, cohost Brian Kilmeade downplayed the situation by saying he was merely in trouble for not being “candid.” Meanwhile, Fox has used every opportunity to delegitimize the Mueller investigation so Fox viewers are already primed to side against it.

Guest Andrew Napolitano, Fox’s senior judicial analyst, was there to help the Manafort/Trump cause this morning: “I've never heard of this before,” he said accusingly about yesterday's findings which will almost surely lead to a very lengthy prison sentence for Manafort. “They had him testify before the same grand jury that indicted him, and then a federal judge found that he lied to that grand jury.”

After cohost Brian Kilmeade helpfully noted that Manafort had not been found to have lied on all the counts, there was this exchange:

NAPOLITANO: He’s exposed to more than 20 years in jail. That is so much jail time, he might very well be a candidate for a pardon --

NAPOLITANO: And the public might accept the pardon. It also tells me, B, Mueller is still on the hunt.

Earlier today, after Trump tweeted that he was reviewing the funding bill to keep the government from shutting down again "with my team," we suggested that meant he had not finished watching Fox & Friends yet:

Maybe Trump needed that extra time in order to take in this legal commentary along with the other recommendations from his Televisors.

Watch Napolitano suggest that Trump pardon Manafort below, from the February 14, 2019 Fox & Friends, via Media Matters.

John McKee commented 2019-02-15 05:57:28 -0500 · Flag
Softly, softly, catchee monkey. Mister Mueller has been cunning and cautious as he rolls out his strategy to bring down the whole wretched Trump/Russia treason machine without leaving a single participant standing. By working with the SDNY and other FBI offices, he is making doubly sure that the Traitor-in-Chief has no sniff of an opportunity to pardon himself, his vile family or any of the co-conspirators.

Have faith, dear friends. The cavalry is about to arrive :)