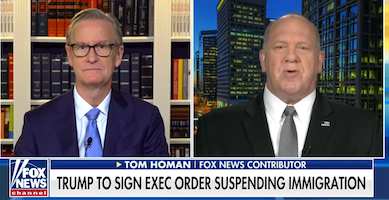 Sure enough, Homan was full of praise for Trump’s move. “I think it’s a great decision by a great president. Look, he’s doing two things. Number one, he’s doing what he should be doing as president of the United States," Homan said. Never mind the need for more coronavirus tests or PPE shortage. Homan claimed that the ban is “protecting Americans against further spread of the virus.” Trump is  “also protecting American workers,” according to Homan.

“That’s exactly what a president should be doing,” Homan continued. Then he called for even more restrictions. “So, I applaud him for this, and I think it’s a great first move, and I know during his press conference yesterday he said he may expand on this executive order which I think he should. I think we ought to be looking at temporary workers coming in, especially high-skilled workers, like H1B visas. These are high-tech operatives, well-paying jobs that even before the pandemic they displaced a lot of U.S. workers, so I think there’s room for expansion.”

But no Fox discussion would be complete without demonizing Democrats. Homan knew the script. “It’s a fantastic move and anybody that distracts from this or wants to attack the president for this, they don’t have America number one in their heart,” he baselessly accused.

Doocy moved on to prompt Homan to specifically attack Trump’s 2020 opponent, Joe Biden. Doocy displayed a quote from Biden saying, “Trump is tweeting incendiary rhetoric about immigrants” and “asked” Homan, “Is Joe Biden right? Is Donald Trump just changing the subject because he’s blown it on COVID?” As if Doocy didn’t know how Homan would respond.

Homan took the cue. “I think Joe Biden is very wrong. First of all, I think the president has done a great job with the COVID. I think he made a lot of moves in the beginning where people are questioning those moves he made about stopping travel from China. But more importantly, Joe Biden wants to be the president of the United States. He should be putting American workers first. He should be putting the health and safety of American workers first. That’s what the president has done. Joe Biden ought to take a page out of his playbook. This president is doing exactly what a president is supposed to do and what the American people expect him to do. He’s a great president.”

Even the conservative Washington Examiner suggests that Trump’s ban is unlikely to solve U.S. economic problems.

But Doocy knows his job is to cheerlead for Trump, not fully inform viewers.