On Fox & Friends: Heroic Covington Catholic MAGA Boys Targeted Because They Are White 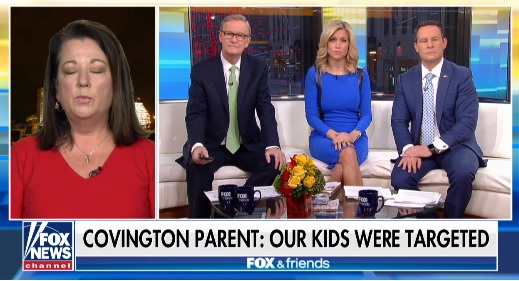 If anything fits Fox’s narrative of white, Christian, male victimhood, it’s the saga of the Covington Catholic MAGA boys who, according to America’s white, morning flagship show, were targeted because they are - wait for it – white!

On Tuesday morning, Fox & Friends interviewed a chaperone who was with Covington Catholic High School's pro-life MAGA boys during the now-legendary incident, in front of the Lincoln Memorial, when one of the MAGA boys stood smirking in the face of a Native-American elder.

Cohost Ainsley Earhardt reported that Covington Catholic had been forced to close because the students were facing death threats and OMG “being smeared as racists.”

Cohost Brian Kilmeade chimed in: “All this before the full video was released showing what really happened with left-wing activists who approached the teens first.”

Cohost Steve Doocy introduced the guest, Jill Hamlin, a school chaperone. In setting up Fox’s patented narrative of conservative victimhood, Doocy asked if the kids were targeted because of their MAGA caps. She agreed and added that they were targeted for what they stood for “which is Christianity, the right for life, and they were singled out, and I believe partially, because of the color of their skin."

In setting up the show's message - that the boys were bullied, Earhardt asked why Native American Nathan Phillips chose to "get in [Covington Catholic student Nick Sandmann’s] his face."

Hamlin spoke about the “horrific insults” thrown at the boys by the small group of Black Hebrew Israelites. She said she didn’t know why Phillips chose Nick Sandmann and then gushed over how Sandmann “had the courage to look this man in the face and he tried to diffuse the situation by not reacting and by standing there respectfully."

Cohost Brian Kilmeade encouraged her to explain what happened. She spoke at length about the "horrible, horrible things” said to the teens which prompted them to perform school chants to drown them out. Hamlin almost broke into tears when spoke about the “hatred message that was being thrown at our children.”

Doocy asked her to discuss her feelings about the Catholic Diocese’s initial condemnation of the boys which, according to Doocy, “jumped the gun" and "that made it worse.”

Hamlin responded that she was disappointed that the church would "rush to judgment by not supporting one of their own schools and their own people.”

Earhardt commented that “now that we know all the facts” it must be hard for Hamlin, as a Christian mother, to encounter “people com[ing] up to young kids and they shout these insults at them." Advancing the rightwing/Fox anti-media meme, Earhardt added, “And then to see how the media didn’t tell the full story."  Eahardt became visibly upset when she spoke about cancellation of classes at Covington because of possible danger. Hamlin agreed that everyone is frightened.

Actually, Ainsley, you don't have "all the facts." The “left wing activists,” cited by Kilmeade were members of the Black Hebrew Israelites. They are, according to the Southern Poverty Law Center, extremists with a ‘long, strange list of enemies’ including white people, Jewish people, and the LBGTQ community,” NOT “left wing activists.” And contrary to Kilmeade’s claim, that this group "approached the teens first," they did not approach the boys, "but stood still while hurling their insults, some of which were directed towards the Native Americans.

What wasn't mentioned was that only two Native-Americans approached the mob of (all-white) boys. One of them, the elder Phillips, said that that the boys blocked his way to the Lincoln statue where he wanted to pray. He also noted that he approached the boys in an effort to stave off a confrontation between them and the African-American men.

Oh, so sad about these heroic young Christian, white teens. But as Salon points out, in “Defenders of the MAGA-hat youth: Spare us your concern for children, please,” there seems to be a double-standard when it comes to the right-wing smear machine smearing children.

Hamlin is repeatedly lying about the incident and the Fox & Friends bunch is openly encouraging her to do so.

The Covington Catholic School kids were not just minding their own business being good, devout kids. They were participating in an angry partisan, political demonstration wearing MAGA gear, something that exposes Covington to a legal challenge as they’re blurring the line between church and state.

The “March for Life” demonstration is a specific Right Wing response to the annual Women’s March events that happen around the country, with the intention being to angrily counter women who stand up for themselves and their rights. What I’ve seen of the “March for Life” materials has regularly been a smug, angry and hateful attack on women, particularly non-White women and lower income women. The hatefulness of their event is even more charged today, given the viciousness of the Pence White House and the impending overturning of Roe v Wade by the current Supreme Court. If these guys get their way, no woman in this country would be permitted to have any reproductive rights, even if she were raped or if there were dangers to the life of the mother. They’re already trying to spin the New York legislation as some kind of sanctioning of murder rather than listening to the women who have had serious medical issues and needed to have a late term procedure.

So the Covington kids weren’t there on any cheerful Christian visit to the Capital. They were there to attack women’s rights and the school was sanctioning that activity.

Hamlin and the Fox & Friends gang dissemble when they play the victim card in discussing the Black Hebrew Israellites. As Priscilla has noted, the BHI are not “left wing activists”. They are a hateful wingnut outfit, along the lines of the Westboro Baptists, and they frankly don’t deserve further media attention. (If anything, all this nonsense from the Right Wing about this situation has only given them a bunch of publicity that they wanted.)

But Hamlin carefully doesn’t mention that the four guys from the BHI are only seen in video for the final hour of the day’s activities. There’s nothing to show what was going on for the prior 8 to 9 hours of fun, including what’s been discussed by other witnesses as earlier antagonistic comments back and forth between the large group of Covington Right Wingers and the four BHI guys. We have no way of knowing without video footage of that of how many provocations were hurled AT the BHI wingnuts before anyone started to record what material we do have. And we must remember that the BHI was present to feed on the hatefulness of the “March for Life”. Had the Right Wing not descended on the Capital, it’s likely that the BHI would not have been there. So both in setting up the event and in repeatedly engaging with counter-protestors like the BHI, the Right Wing lost any moral high ground they could have claimed. Yes, the BHI guys said offensive, hateful things that you wouldn’t want to hear anyone say to your teenager. But let’s not forget that the Covington teenagers were hurling plenty of insults back, and that this was going on for a much longer time than the Right Wing wants people to think.

Doocy and Hamlin also bring up a Right Wing talking point about the school’s public apology for the shameful behavior of the students. Which is that the Right Wing wants everyone to think that some bureaucrat in the diocese issued this apology and that the school really doesn’t agree with it. Sure. In reality, one would hope that the school, now embarrassed by the way the students’ terrible behavior has made a public mess, would take the appropriate disciplinary actions.

I find it interesting and frankly despicable that Hamlin would like everyone to think that the Covington students were somehow acting heroically and decently. That’s a lie. The students spent the day engaging in a hateful partisan action and capped it off by exchanging shouted insults with a few wingnuts near the Lincoln Memorial. And to ice the cake, they proceeded to jeer and laugh at a Native American elder who was trying to diffuse the brewing confrontation between a large group of MAGA gear-wearing boys and a small number of angry counter-protestors. It makes sense that Nathan Phillips went to the Covington group to get them to stand down, given that there were far more of them than there were BHI counter-protestors. Except that he had thought that the Covington students would be respectful and move off with their chaperones, as was the point of his medicine chant. Instead, the main student refused to move and just smirked in his face, while the rest of the students surrounded them jeering and laughing and doing mock chants based on the Atlanta Braves. (Doocy blatantly lies when he says the kids were just doing their school cheer – the video clearly shows what they were doing.)

Doocy also tries to stir the pot here by raising the notion of the attorney who’s trying to see if he can get away with a defamation lawsuit. (To which I would say “Good luck with that” – the video clearly shows the Covington students acting in a vicious and hateful manner. It’s not defamation if they actually can be seen doing what you’re accusing them of.) Hamlin, for her part, says she doesn’t know anything first hand, which exposes that this isn’t an organized idea but rather something Fox News would like to see happen.

The reality here is that these students are not heroes or innocent victims. They knowingly engaged in hateful and shameful behavior and now they are being held to account for it. I wouldn’t be surprised if these guys did this kind of thing at earlier Right Wing events, particularly after seeing photos of Covington students in blackface at school events, jeering non-white students from other schools and giving White Supremacy hand signals. The difference here was that the behavior was caught on video and shown to the public. Yes, it’s unfortunate that the public reaction has been angry toward them. Yes, it’s unfortunate that they now feel the scrutiny of everyone watching them. Yes, it’s unfortunate that they’ve angered some people enough for really angry things to have been said to them. But none of that would have happened if the Covington group hadn’t engaged with the BHI wingnuts and hadn’t openly jeered and disrespected a Native American elder. If they are having a tough day today, it is because of their own bad acts.

The proper course of action for the Covington students, their parents, and their chaperones is that they need to publicly and humbly apologize for what they have done. And I’d recommend that all the Covington students in those MAGA hats be required to do 100 hours community service at the closest Native American center they can, so that they learn their lesson.