It looks like Fox News contributor and Republican pollster Frank Luntz has joined host Megyn Kelly in being thrown under the network's bus in favor of Donald Trump.

In case you missed it, Donald Trump starting feuding with Luntz via Politico. First, there was Luntz’ side:

In an interview with POLITICO, Luntz said Trump — and Democratic presidential insurgent Bernie Sanders — are “delivering a big ‘f—you’ to the elites in America.”

(S)ources told POLITICO that, in the days before the Aug. 6 Fox News presidential debate where a Luntz-run focus group panned Trump’s performance, the pollster told a closed-door gathering of major conservative donors in Southern California that Trump was dangerous to Republicans and was “turning what we believe into a joke.”

On The Kelly File show that immediately followed the August 6th debate, Luntz excitedly showcased negative reactions to Trump in that focus group.

Trump responded by calling Luntz “a slob” during a subsequent appearance on Fox & Friends. Trump told Politico, “And frankly, if I was [Fox News President] Roger Ailes, I’d fire that guy so fast for what he did that his head would spin.” Trump also called Luntz “a clown” who “shouldn’t be working for Fox because he’s a total conflict of interest.” 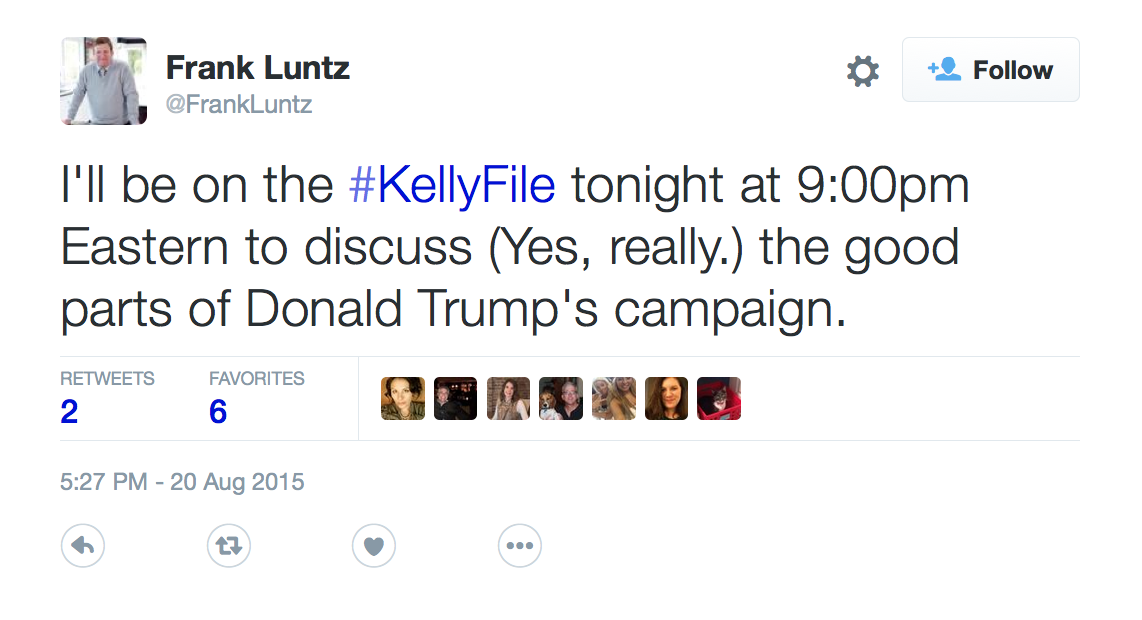 This morning, Luntz talked up The Donald again, this time on Fox & Friends. Suddenly, the guy who slammed Trump for dangerously stoking anger without “the balm of solutions” slobbered over Trump’s “smart” use of the term “anchor baby.”

LUNTZ: Well, the smartest thing that he could have done is take on political correctness. And this unites both conservatives and moderates, Republicans and independents. That you’ve got about 70% of America that thinks that we have gone so overboard in our language, in our messaging, in what we cannot say and that every time he uses the phrase “political correctness,” and challenges it, you can actually see his numbers going up in the polls.

… I know what the language is and I know what works. And Donald Trump is really on to something when he talks about “political correctness.”

Host Tucker Carlson patted Luntz on the back. “It speaks well of your integrity that you say that. Trump has been tough on you personally and here you are complimenting his performance. …Good for you. Straight shooting from Frank Luntz.”

Actually, I think it shows exactly the opposite.

Watch Luntz fold like a cheap suit below, from the August 22, Fox & Friends. Also, check out Sam Seder's great take on the feud (recorded before Luntz appeared on The Kelly File) underneath in which he notes that Luntz is the one responsible for the Republicans' adoption of this kind of fiery rhetoric in the first place.

“Luntz, who sold his company, Luntz Research, to Omnicon in 2005, said he’s had enough of politics. “I’m tired of selling reality,” he said. “Reality sucks. It’s mean. Divisive. Negative. What Hollywood offers is a chance to create a new reality, in two hours time.”
”http://www.thewrap.com/exclusive-fox-pollster-goes-hollywood-2720/">http://www.thewrap.com/exclusive-fox-pollster-goes-hollywood-2720/

Poor Luntz, it didn’t work out for him and now he’s back to FOX “news” and having to suck up to the Trumpster.

“Luntz would also like to break into Hollywood as a consultant, but he can’t get his calls returned. He can’t figure it out. He thinks it must be a partisan thing.”
http://www.theatlantic.com/politics/archive/2014/01/the-agony-of-frank-luntz/282766/#comments

As long as Trump brings up the ratings he’ll continue to be treated like a superstar. Not just at Fox, but at all media outlets.

Eyes On Fox commented 2015-08-23 10:15:30 -0400 · Flag
Should The Donald trip and fall sometime on the campaign trail expect Fox News establishment pimps like Frank to reenact Caesar getting knifed into a bloody pulp at the Theatre of Pompey. I’m being metaphorical of course. ;^)

Bob Roberts commented 2015-08-23 02:22:52 -0400 · Flag
I would take that bet Truman but I know I would lose. You won’t hear much about Huckabuck and Carson in his next focus group, but like you said, plenty of praise and hoorahs for the Trumpster.