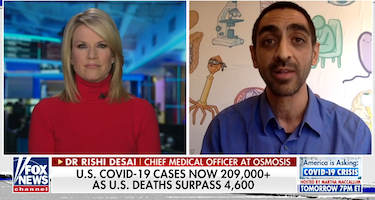 Fox News host Martha MacCallum showed no interest in Dr. Rishi Desai’s comments pointing out how the Trump administration’s “very weak response” to the coronavirus pandemic has cost American lives. Instead, she quickly ended the interview.

Yet that paragon of journalism had nothing to say other than a good-bye when her guest, infectious disease specialist Dr. Rishi Desai, pointed out the deadly failures of the Trump administration’s response to the coronavirus (COVID-19) pandemic.

I suspect MacCallum was trying to get Desai to blame private labs or the FDA for the serious, ongoing shortage of testing with this question:

MACCALLUM: You also recommend massive, large-scale testing. Now, what we hear every night is that the test, that there are millions of tests available, and yet, we don’t have that pinprick blood test that you can just sort of get, you know, at your local doctor and know in 15 minutes. But they’re working on it.

As DailyKos noted, “These fast and seemingly simple tests have been rushed through the process of FDA approval. However, there are numerous caveats to the FDA’s speedy acceptance of unproven tests.”

Whatever MacCallum was after, she surely was not looking for the epic response she got:

DESAI: Yeah, they’re working on it. They should have been working on it for months. So, the fact is we knew about this from the WHO when? December 31, 2019. So, last year we knew about this. We knew the coronavirus was coming. We knew it was a respiratory disease. We knew it was person-to-person. Why is it that it’s this week that the FDA finally approved these kind of new Abbot Lab testing - which, by the way, is one test at a time.

It’s a great test, but it’s one test at a time. It’s different than the labs that are doing mass testing, right? So, this is a wonderful test, don’t get me wrong, but it’s one test for 15 minutes. That’s wonderful, but it’s not the same volume that you really need. This is better for kind of outpatient clinics and things like that.

We needed this months ago. You look at Korea. South Korea and the U.S. had their first official confirmed case on the same date - January 19. Since January 19, you look at what South Korea did and what we did. Their population is one-sixth of ours. Look at the cases they have. Look at the mortality they have. It’s a trifle compared to what we’re dealing with right now because we’ve had a very weak response and they had a really strong response.

You would think a journalist, especially one with the “ultimate journalistic professionalism” would have probed for more details about what South Korea did that the U.S. did not, how and why the U.S. response is so lacking and how many Americans may have needlessly died as a result.

But, given that this is Fox News, MacCallum sat silent for several moments, as though she were listening to guidance from a producer. When, at last, she spoke, she ended the interview, saying, “Doctor, thank you. Very interesting to talk to you, Dr. Desai. I hope you’ll come back as we move through this difficult period in the country. Dr. Desai, thank you very much, sir.”

I interpret this as a signal that MacCallum, herself, wanted to hear more from Dr. Desai. It’s doubtful that she ever will on Fox News.

You can watch it below, from the April 1, 2020 The Story with Martha MacCallum.