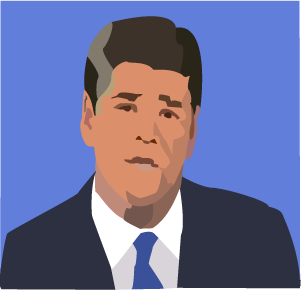 Jay Z is one of the most successful American entertainers and businessmen. He’s married to an equally successful entertainer and the couple recently hobnobbed with Prince William and Kate. But to Fox News and Fox Nation, Jay Z’s most notable resumé item is that he’s a “former crack dealer.”

Jay Z is the kind of rags-to-riches American success story you’d think Fox News would celebrate. None other than Fox regular Steve Forbes, who has a Fox News show named after him, said Jay Z “epitomizes the essence of the American entrepreneurial spirit.” Forbes also called Jay Z “inspiring” and likened him to Steve Jobs, Warren Buffett, and Bill Gates 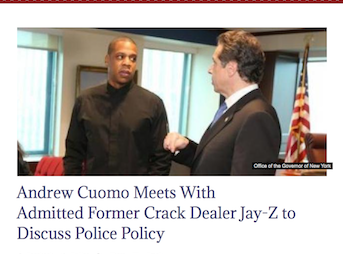 When you need advice on a subject, you go to an expert.

Gov. Andrew Cuomo (D-N.Y.) did just that when he had a policy meeting on the subject of how cops enforce the laws with hip-hop mogul Jay Z — who earned most of his expertise in crime as a crack dealer.

Jay Z didn’t meet with Cuomo to give insights into crime but into law enforcement in the black community. Fox Nation acknowledges that in one sentence that forms the fourth paragraph of its nine-paragraph report: “The two discussed 'a top-to-bottom review of the criminal justice system and how we can all work together to pass a reform package,'” the governor’s spokeswoman is quoted as saying.

Then the article spends the next three paragraphs discussing Jay Z’s long past criminal history.

Similarly, Sean Hannity echoed the same sentiments in a discussion last night. It featured a large graphic on the lower third of the screen blaring, “CUOMO’S CRIME EXPERT.”

That’s bad enough on the face of it. But Fox News has quite a history of burying the criminal pasts of many of its white experts:

Assigned to the National Security Council staff in the Reagan Administration, North was involved in planning the rescue of 804 medical students on the island of Grenada and played a major role in the daring capture of the hijackers of the cruise ship Achille Lauro. After helping plan the U.S. raid on Muammar Qaddafi’s terrorist bases in Libya, North was targeted for assassination by Abu Nidal, the world’s deadliest assassin.

So let’s see, what’s the difference between these examples and Jay Z? Well, Furhman, North and Kerik are conservatives. And they’re all white. But I’m sure race has nothing to do with it.

Watch the December 12 Hannity segment below.

marco commented 2014-12-13 16:09:21 -0500 · Flag
And Dinesh D’Sousa on hiatus from being a frequent patriot guest while currently serving in community corrections. I don’t know if law allows him to be on fox during his 5 year probation now that he’s a felon for voting law violations.

Richard Santalone commented 2014-12-13 08:42:16 -0500 · Flag
@ Aria Prescott It’s PAINFULLY OBVIOUS to any THINKING person who posts here (including me) that Faux Spews Channel pundits (especially the ones listed in your post Aria) have NEVER heard (or have chosen to ignore) these ancient words from the Bible:

Hate Nation, whose parent company is 20th Century Fox/News Corporation, the same company embroiled in the hacking and bribery scandals in the United Kingdom. Former News Corporation employees were convicted of bribery and hacking charges.

When writing about these frauds in social media tie their names to the hacking and bribery scandals until the masses memorizes it.

And Jesse Watters’ entire career is televised harassment, often with trespassing- Not to mention that most of his editing amounts to criminal defamation.

NewsHounds posted about Fox Describes Jay Z As ‘Former Crack Dealer’ on NewsHounds' Facebook page 2014-12-13 02:19:19 -0500
From the network that hides the criminal records of their white guests.