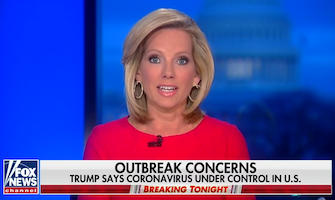 Donald Trump has made the U.S. more vulnerable to the coronavirus. But Fox News is pretending he is protecting us.

Media Matters has an excellent rundown of Trump's dishonest incompetence surrounding the coronavirus, aka COVID-19:

Trump’s initial reaction to the COVID-19 outbreak was to downplay concerns about it, telling CNBC in a January interview that it was “totally under control” and “it’s going to be just fine.” Trump also claimed the disease would “miraculously” go away by April -- which was contradicted by the director of the Centers for Disease Control (CDC). And two weeks after hundreds of Americans were trapped on a cruise ship in a Japanese port under quarantine because some passengers tested positive for COVID-19, the Trump administration evacuated them to the U.S. But the administration flew home passengers it knew were infected on a flight with other uninfected passengers, against the CDC’s advice -- a decision which reportedly angered Trump, who wasn’t informed about that decision and who said he should have been the one to make it.

Media Matters also cites a terrifying article in Foreign Policy called, “Trump Has Sabotaged America’s Coronavirus Response.” The article states, “As it improvises its way through a public health crisis, the United States has never been less prepared for a pandemic.” In great detail, Pulitzer Prize winning author Laurie Garrett explains how the Trump administration has systematically dismantled the infrastructure for any pandemic response.

But Fox is not just hiding the truth from its viewers, it’s deliberately misleading about it. For example, on today’s Special Report, Fox’s flagship “straight news” show, anchor Shannon Bream began her report by chirping credulously, “President Trump says the coronavirus is very much under control in the U.S.”

In a report from Fox's Jonathan Serrie, we saw World Health Organization Director General Tedros Adhanom Ghebreyesus saying that the disease has “not yet” become a pandemic. What got left out is that Dr. Tedros also warned, the window of opportunity is narrowing,” and “We need to act quickly before it closes completely.” Instead, we got more happy news: “WHO officials say they’re encouraged the virus’ DNA has shown no significant change. And the number of new cases in China has been declining since the beginning of the month,” Serrie said.

Serrie also relayed that the White House “will likely” request $1 billion in supplemental funds to “help federal, state and local agencies” prepare for a response and “also encourage the development of vaccines.” But according to Garrett, having destroyed the federal disease-fighting structure, the Trump administration has “now resorted to improvisation.” It seems no accident that Serrie’s report included no details about any current federal plans.

Media Matters has a roundup of other coronavirus happy talk on Fox. It includes Fox Business host Lou Dobbs congratulating acting Department of Homeland Security Deputy Secretary Ken Cuccinelli as well as the rest of the administration and Trump “for what you are doing, because within this country, it seems to be under control and every safeguard taken.”

Look, I’m not trying to fear monger. It seems quite possible that the epidemic leaves the U.S. unscathed. I certainly hope so. But there are real risks and real anxiety. At a time like this, we need calm, clear-eyed truth-telling from both our government and our media. Sadly, we are not likely to get it either from the Trump administration or from his propagandists at Fox News.

You can watch some of the dishonest propaganda below, from the February 24, 2020 Special Report and the February 18, 2020 Lou Dobbs Tonight.

Hachdan commented 2020-02-25 16:44:57 -0500 · Flag
When COVID-19 spreads significantly in the US it will be a racist and prejudiced ethnic problem. It might be blamed on the Democratic Party. Trump, Fox, et al only care about money and power. Their base is unfathomably obtuse. They will never be able to reason themselves out of a paper or plastic bag.

Bemused commented 2020-02-25 11:28:53 -0500 · Flag
The foxies should be worried, very worried because over 80% of the deaths so far have involved their viewer base, namely elderly people with a serious ailment (cancer, diabetes, cardiopathy, etc.). Another group are overworked, deeply tired care-givers.

The original mortality rate of 3% referred to people in China who’d been hospitalised with particularly severe symptoms. They’ve been testing everybody around them and the mortality rate has been dropping steadily. There is growing evidence that the new virus may actually be no worse than the common flu.

That said. I’m very glad that the new virus was taken so seriously because it is so contagious. Fortunately, it doesn’t seem to be likely to mate up with a more dangerous strain.

While there seems to be increasingly little reason for the healthy, well-fed to panic, particularly the new virus could decimate the poor and sickly throughout the world.

John McKee commented 2020-02-24 21:39:19 -0500 · Flag
Even with antibiotics and other modern developments in treating secondary problems like pneumonia, than Corona virus is about twice as deadly (around 3%) as the Spanish Flu (around 1.5%), which killed more people internationally than the First World War.