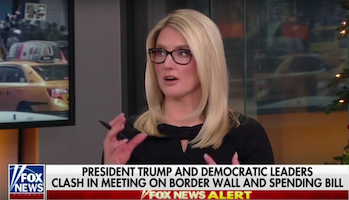 Despite Donald Trump’s threats to shut down the government if he doesn’t get funding for the border wall, Fox News doesn’t want its viewers to recall that Trump promised he’d get Mexico to pay for it.

Trump promised again and again he’d get Mexico to pay for the wall. But two years after his election, he has not only forgotten the promise, he threatened to hold the entire government hostage if Democrats don’t agree to have the U.S. pay for it. It was part of his temper tantrum in today's meeting with Democratic leaders Nancy Pelosi and Chuck Schumer.

Trump made a series of irrational and untruthful claims about the border during that meeting. But on Fox’s Outnumbered show, which immediately followed, three of the four panelists made a continuing effort to blame the Democrats and pretend that Trump has behaved presidentially.

“The president has been crystal clear,” Republican Jason Chaffetz, the show’s “one lucky guy” guest, said. “He wants a wall. I think the Democrats have failed to define what is security. If it’s not a wall, and you keep saying, ‘it’s security,’ then what is it?”

Democratic cohost Marie Harf, who had previously put Chaffetz in his place when he tried to argue that Democrats don’t want any border security, now reminded everyone that, “What Trump voters voted for though, was actually Mexico paying for the wall, not U.S. taxpayers.”

Oops! That campaign promise was so not welcome!

Cohost Melissa Francis quickly interrupted Harf to change the subject. “Answer his question, though, what is a wall?” Francis sharply commanded.

Harf replied that border security involves a combination of technology, drones, and “fencing in some parts of it but not an entire wall.”

Francis exclaimed, “That’s exactly what the president’s talking about.”

So cohost Lisa Boothe did her part by claiming that Trump used the word “wall” “because it sounds better on the campaign trail” but that he didn’t really mean it.

Watch the Foxies try to erase history below, from the December 11, 2018 Outnumbered.

Fox News apologists can’t claim Trump meant a comprehensive security system when he said “wall” on the campaign trail because it makes no sense in the context of his claims Mexico was going to pay for it. Forgetting how ludicrous the notion of Mexico paying one time for a wall, imagine asking for an open check to pay for more border agents year after year.

Trump thought he could bully Mexico into paying for his albatross of a physical wall and when they kept laughing in his face he quit to give up further humiliation.

I will have to hand it to Trump. In the news conference in the White House he held with Pelosi and Schumer he told his lies with bluster. The guy’s such a practiced liar I think he believes his own bulls—t. Pelosi, not wanting to embarrass the President, came across as hesitant. If I didn’t already know many of Trump’s ‘facts’ like they’ve built extensive bits of his wall already was him mouthing a complete fantasy I would have thought him the winner of the ‘debate’.

Anonymous commented 2018-12-11 22:52:12 -0500 · Flag
I thought Chaffetz was positioned as one of the brighter bulbs among those now perversely calling themselves “Conservative”, but here he is the dummy of the otherwise female group. You’ve generally gotta be pretty dumb to be the dummy of the group on Fox.

Chaffetz’s key lies were implying that the Democrats haven’t been clear while equating Trump’s demagogic, over-simplistic wall-concept with clarity. As demonstrated here, Congress has been clearer than Trump about the details of their security set up. Some things are smarter simple, but Trump’s image of the wall is stupid-simple. Everybody but Harf is urging that Trump is not to be believed, that his stupid-simple is really smart-complicated. This having-it-both-ways normalizes Trump’s BS. This segment is perhaps a gesture at compromise, but Fox does that in a way that won’t offend the President.

Democrats in Congress should bargain with Trump for what they’ve put on the table ($1.5 billion on border security) PLUS whatever amount Mexico chooses to add to that, up to $15 billion.