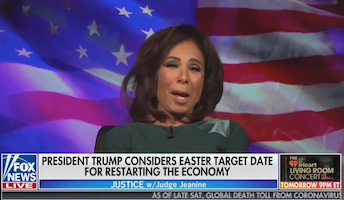 There was a lot of speculation online last night that Fox News host Jeanine Pirro was drunk during her show. For what it’s worth, I’m a contrarian on this.

Yes, she appeared disheveled and stumbled through some of her comments but I believe it’s quite possible the problems were due to what Fox News said they were:

“Jeanine Pirro was broadcasting from her home for the first time when she encountered several technical difficulties which impacted the quality of her show, including the loss of a teleprompter. As we have previously said, we are operating with a reduced staff working remotely to ensure the health and safety of our employees in these unprecedented times.”)

Judge Jeanine missed the first segment of her show tonight because of “technical difficulties” and then hosted the rest of it in this condition pic.twitter.com/KxGGBXUkly

Mediaite noted that Pirro's name and #DrunkJeanine were trending on Twitter this morning.

But, while I think it’s possible she had a drinky-poo or two, I find it quite plausible that her disoriented state was due to technical problems.

The technical problems were so bad, the newscaster from the previous hour conducted the first interview, with Dr. Deborah Birx, of the White House coronavirus task force.

At any rate, Pirro did not seem at all drunk during her own interviews, in my opinion. So no, I don’t think her inability to conduct that first interview was because she was so schnockered. You can watch Pirro's first interview below. It’s the one on top, with Rep. Steve Scalise.

While I’m hardly a Pirro fan, I’m going to give her the benefit of the doubt this time.

You can watch her three interviews below, from the March 28, 2020 Justice with Judge Jeanine.

If I could have a chat with one Fox News person, I would probably pick her. I’m dying to know how her feelings about Fox changed, when they changed, and what she’d say about her role there.

As for Pirro’s hair, I agree with doors17. There are no hair and makeup people working right now or very few.

John McKee commented 2020-03-29 23:34:17 -0400 · Flag
Rather telling tweet from someone who I still loathe with a passion for her participation in the appalling ‘Fox ’n Fiends’ daily propagandalooza. After all, she should know…

Will another one bite the dust? Let’s just say she’s not one to support other women.

Eyes On Fox commented 2020-03-29 22:41:12 -0400 · Flag
I personally think streaming from home that 5 liter box of chilled Franzia in Pirro’s refrigerator is too much a temptation. But she’s such a lush she probably could drink the entire box and walk a fairly straight line.

doors17 commented 2020-03-29 20:48:45 -0400 · Flag
To be fair, I think it was more of a case where she didn’t have her hair and makeup professionals to create the magic illusion. I also read that her teleprompter went down forcing her to go without a script.