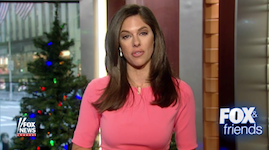 After being called out by the Department of Agriculture, the Washington Post and Mother Jones for using fake statistics as an excuse to “ask” if the food stamp program should be abolished, Fox & Friends host Abby Huntsman apologized today. She never explained where the fraudulent information came from or why neither she nor her two guests, including a Democrat, bothered to fact check it.

Huntsman opened a Fox & Friends discussion earlier in the week by saying, “Food stamp fraud is at an all-time high. … This year it is estimated that $70 million of taxpayer money was wasted on food stamp fraud. So is it time to end the program altogether?”

In my post on this segment, I criticized the Democratic guest, Jehmu Greene, a Fox News contributor, for not calling out how Fox was mischaracterizing what was actually a minuscule amount of waste and abuse in order to stage its latest battle in its heinous war on the poor. It turns out, Greene didn’t seem to think she needed to do any fact checking of Fox’s GOP propaganda any more than host Abby Huntsman did.

Mother Jones’ Kevin Drum did the math, however, and he debunked the $70 million figure:

First, I have no idea where Fox’s $70 million figure comes from—and I looked pretty hard for it. The Fox graphic attributes it to “2016 USDA,” but as near as I can tell the USDA has no numbers for SNAP [aka food stamp] fraud more recent than 2011.1

SNAP fraud isn’t at an all-time high. It’s been declining for years. But here’s the thing: The fraud rate in 2011 may have been low, but this was in the aftermath of the Great Recession, when total SNAP payments were very high. So although the percentage is low, the dollar value of fraud clocked in at $988 million. Fox could have used this far higher number, which is, in fact, an all-time high. It’s only an all-time high because SNAP was helping far more people, but still. In the Fox newsroom, that would hardly matter.

Washington Post’s Erik Wemple contacted the United States Department of Agriculture and reported that the USDA asked Fox to correct its false report.

The latest information from 2009 to 2011 shows the fraud at 1.3%, which is approximately $853 million for each of those three years, and nationally food-stamp trafficking is on the decline. So sorry about that mistake.

She didn’t say a thing about retracting her “question” about abolishing the program that helps feed millions of Americans.

David T commented 2016-12-30 14:06:29 -0500 · Flag
What am I missing? Obviously food stamp fraud is not at an all time high as Fox claimed. However, the corrected fraud numbers are significantly higher than the $70 million which Abby cited. Won’t Fox use the corrected info to bolster its argument? Fox was wrong as usual, but generally is much more wrong in its claims.