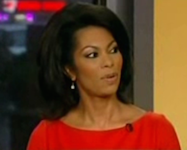 On Fox News, working to restore African American faith in law enforcement is almost like a death sentence for white people!

On this morning’s Outnumbered, the hosts came up with new ways to fear monger and smear the Obama administration’s efforts to restore calm in Ferguson, Missouri in the wake of violent protests over a grand jury’s decision not to indict Fox News hero Officer Darren Wilson for the shooting death of unarmed Michael Brown.

Co-host Andrea Tantaros started by reiterating the now-familiar talking point that the inadequate police response was President Obama’s fault. But then Tantaros, the woman who once urged her audience to out and punch an Obama supporter “in the face,” came up with new fear mongering. Speaking to co-host Harris Faulkner, the lone African American, Tantaros said:

I think this is an important point because look what we’re doing to the police in communities. If you start to say things like (Attorney General) Eric Holder said today, “I’m going to take federal action to restore our faith in cops,” you put pressure on cops not to do their job, Harris. They’re going to pull out of communities that desperately need policing and that’s what we saw happen in Ferguson. People said, “We don’t want the police.” Now, everyone’s asking, “Where are the police?” Police are damned if they do and damned if they don’t.

Not only did they ignore “Punch” Tantaros’ actual incitement to violence, how about Bill O’Reilly’s years of incendiary rhetoric about Dr. George Tiller – who was later assassinated?

Nah, that never counts on Fox.

Watch the discussion below.