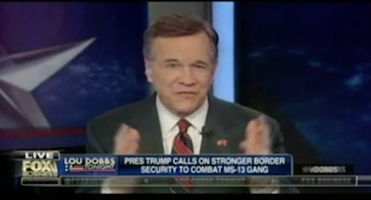 When Donald Trump says he would “love to see” a government shutdown over “border security,” Fox Business hosts take that as marching orders to slobber over his political mojo and talk up a shutdown as good for the economy. Despite all evidence to the contrary!

Yesterday, As The New York Times noted, Trump urged a shutdown even as Congress was making progress in delicate negotiations for a bipartisan spending bill. Either he was completely clueless about the bill or completely unconcerned about throwing a wrench into it:

“I’d love to see a shutdown if we don’t get this stuff taken care of,” Mr. Trump said at a meeting with lawmakers and law enforcement officials to discuss gang violence. “If we have to shut it down because the Democrats don’t want safety,” he added, “then shut it down.”

So what’s not to love if you’re Fox Business host David Asman, guest hosting on Lou Dobbs Tonight, and guest Ed Rollins, contributor and Trump supporter? The two “forgot” that Trump hated shutdowns less than a month ago (but supported the 2013 government shutdown) and overlooked the $24 billion cost to the economy of the 2013 shutdown, as calculated by Standard & Poor’s.

ASMAN: It would take a non-politician to say something like that because a politician’s always calculating, “What’s going to help me here? … If I say I’m in favor of a shutdown, that’s going to kill me politically.” But he came out and said it! He said it’s better to have a shutdown than to have these thugs coming into the country.

ROLLINS: As I have told you before on this show, he’s taught Republicans how to fight and he’s not about to walk away from this issue. He feels very strongly that we need border security. But the vast majority of Americans don’t realize there’s a war going on on the Mexican border.

ASMAN: Politicians have this inflated ego concerning that what they do inside the beltway, that somehow Americans are going to just fall apart if they think that there’s a partial government shutdown. In fact, Americans can do very well without most, without some of the government operating.

ROLLINS: I think the critical thing is he has to go to the country and tell them why he’s doing it and he certainly has that ability to do it. I think he will do everything he can to make sure it doesn’t happen, but if it happens, he’s not going to walk away from it. He wants that border security. He feels that’s very important, he talked about it all during the campaign and he’s gonna get it one way or the other and this may be the way.

By the way, wasn’t Mexico supposed to pay for a border wall? That was another thing Rollins and Asman conveniently “forgot.”

Watch the Trump sycophancy below, from the February 6, 2018 Lou Dobbs Tonight, via Media Matters.

Oh, Donnie . . . if the gov’t gets shut down, that means you won’t get to have your Male Enhancement Military Parade.