Dr. Oz Suddenly Reverses Support For Hydroxychloroquine (Along With Trump And Fox) 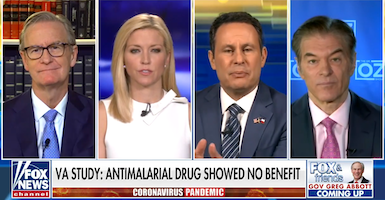 You may recall that just a few weeks ago, Oz poo-pooed hydroxychloroquine skeptics on Fox & Friends. He specifically rejected those who derided a small study of the drug’s benefits that Oz thought meaningful, with the apparent approval of the Fox hosts:

OZ: [A] small study that shows a statistical significance is important, is a really important observation. If it takes me 30,000 patients to show a difference, is that better than showing a difference in 62 patients? If a small trial demonstrates statistically different differences you should respect it, at least pay attention to it.

Today, Oz now thinks the answer is yes, a large study matters. And his new opinion just happens to coincide with the latest Trump/Fox News party line. As Media Matters reported yesterday, “Fox personalities once touted the drug for an alleged “Lazarus effect” on COVID-19 patients, but starting around April 16, mentions of the treatment plummeted by over 75%.” As Fox lost interest, so did Trump, Media Matters noted. What a coincidence!

It’s unclear what caused the sudden reversal but Media Matters also pointed out that yesterday, AP reported a VA study found patients treated with hydroxychloroquine “showed no benefit” and, perhaps more importantly, “there were more deaths among those given hydroxychloroquine versus standard care.”

Whatever the reason, as my colleague, Aliza Worthington, at Crooks and Liars wrote, Oz has now “evolved” - but only after the drug has been stockpiled and is now in short supply for patients with lupus and rheumatoid arthritis. It has already been proven effective for those conditions.

Today, Oz visited Fox & Friends to help champion red states re-opening of businesses in the middle of the pandemic. He and the cohosts – each in a safely remote location - spent a lot of time signaling that they really, really want to protect vulnerable people. Never mind that Fox keeps promoting Texas Lt. Gov. Dan Patrick's suggestions that seniors should be willing to die for the sake of re-opening the economy. Nor did any of the cohosts mention whether they think businesses should pay any vulnerable employees to stay home if they'd risk their lives by gong to work.

Oz was all in on the charade of compassion. He said nothing about the “appetizing opportunity” of returning kids to schools despite the risk of death. He did say, “the beautiful thing about being home is you have time to address some of those” conditions that might make employees more vulnerable to coronavirus, such as heart disease or diabetes.

But after a Trump-friendly bash of China, an acknowledgment that the flu season could coincide with a resurgence of COVID-19 in the fall, the propagandists got around to distancing themselves from hydroxychloroquine. Brian Kilmeade cited the VA study and euphemistically said, “We’ve all been doing heavy work to find out if this works or not.” FACT CHECK: They’ve all been relentlessly promoting it.

Oz first tried to suggest there was no egg on anyone’s face. He said the VA study looked at “older and quite a bit sicker patients” and, “As you know, there have been other studies done” that have “shown benefits, but only, really, when it’s given earlier to patients.”

But then Oz acknowledged, “The fact of the matter is, we don’t know.” He said, doctors are “desperately awaiting” results of “higher-quality randomized trials.” He added, “Let's get the data so we know what we are dealing with.”

Under questioning from cohost Brian Kilmeade, Oz said, “I gotta say, I think at this point there is so much data coming from so many places, we are better off waiting for the randomized trials Dr. Fauci has been asking for. … we don't have randomized data from the United States to educate us well enough right now.”

That begs the question as to why he didn’t see the importance of waiting for the data earlier. Not surprisingly, not one of the three “concerned for everyone’s safety” cohosts asked.

TrumplicanProphet commented 2020-04-23 10:06:23 -0400 · Flag
None of the trumplican fools cared or KNEW anything about HCQ before Trump started talking about it as the miracle cure, and started pushing it like middleschool drug dealer.

THEY AND THEY ALONE are responsible for playing scientist and pushing and politicizing a drug regimine before its fully proven.

So irresponsible and soooo stupid. But I wouldn’t expect any less from cultists

John McKee commented 2020-04-22 17:20:13 -0400 · Flag
Every day, I hear ambulance and hearse-chasing law firms touting for customers with asbestosis, who used Roundup and got cancer and who lost family members to Oxycontin. Can you even IMAGINE the tsunami of class action suits against everyone who made public claims about hydroxychloroquine? And how about the workers who were not provided with proper PPE? And those pressured to go back to work while the virus runs wild? And those who believed the pronouncements of Limbaugh, Hannity, Ingraham and a thousand others?

What will finally bring Wrinkled Rupert and his empire down? Fox, Lies and Videotape.

FOX is poison. Dr. Oz is a quack and a grifter.

Shut them all down.