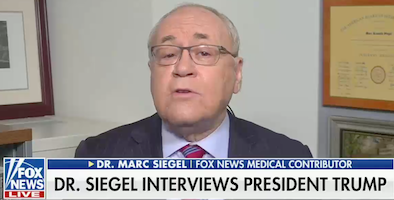 Despite his extraordinary sycophancy, Fox’s Dr. Marc Siegel, could not keep Donald Trump’s unhinged boast about his mental prowess, based on his ability to remember five words, from backfiring. So this morning, Siegel went on cleanup duty and argued that the lapdog interview, itself, “was a cognitive test.”

In the Siegel interview last night, Trump spent a lot of time in a rambling defense of his response to the coronavirus, no time expressing sympathy for sick and dying Americans and no time on a plan.

As I posted earlier, Siegel – a medical doctor -  failed to challenge Trump's claim that coronavirus testing is “overrated” and that he doesn’t “feel comfortable” wearing a mask most of the time.

But in a more dramatically jaw-dropping part of the interview, Trump boasted about his mental facilities. First, the Golfer in Chief claimed he works harder than any previous resident of the Oval Office because so many people are so mean to him!

TRUMP: I think I have had to work harder than others, because I have been attacked from fronts that nobody ever got attacked on, you know, with fake investigations, fake Russia, Russia, Russia, Ukraine, Ukraine.

Next, Trump claimed that he took the cognitive test “a little less than a year ago” (in fact it was over two and a half years ago) in order to “shut these people up” calling him incompetent.

Trump then went on and on about his ability to say “person, woman, man, camera, TV,” in order, as if he had aced an IQ test. In fact, the test is supposed to be easy. Even so, Trump clearly had some trouble remembering the five-word string. Siegel was so busy playing lickspittle, he said nothing to curtail what looked a lot like mental unfitness for the job.

TRUMP: It's like, you will go person, woman, man, camera, TV. So, they say, could you repeat that? So, I said, yes. So, it's person, woman, man, camera, TV. OK, that's very good. If you get it in order, you get extra points. If you -- OK, now he's asking you other questions, other questions. And then 10 minutes, 15, 20 minutes later, they say, remember the first question, not the first, but the 10th question?

Give us that again. Can you do that again? And you go, person, woman, man, camera TV. If you get it in order, you get extra points. They said, nobody gets it in order. It's actually not that easy. But, for me, it was easy. And that's not an easy question. In other words, they ask you to -- they give you five names, and you have to repeat them.

They say, "That's amazing." How did you do that? I do it because I have, like, a good memory, because I'm cognitively there.

The Washington Post points out that this was at least the third time Trump has boasted about this test on Fox News. But I don't believe any of the previous boasts were as insane-looking as this one.

So, what’s a Trump toady to do after this but run to Fox & Friends the next morning and come up with a story about how, despite obvious appearances to the contrary, Trump proved he is sharp as a tack and that he had “showed very strong leadership” on the pandemic?

“Tough-journalist wannabe” Ainsley Earhardt fed Siegel the opening, then found nothing to question in his ridiculous response:

EARHARDT So, Dr. Siegel, I know you're a medical doctor, so you wanted to talk to him about the virus. But did he discuss the election or anything else?

SIEGEL: Well, you know, he discussed the issue of his own clarity of vision. And I did — in a sense, that interview was a cognitive test, Ainsley. I have to tell you, as you know, he is extremely sharp on every second. And he did a test on TV where he basically, you know, went through how great his memory is.

You can watch Siegel’s attempt at rehab below, from the July 23, 2020 Fox & Friends, via Media Matters.

Underneath is the “person, woman, man, camera, TV” discussion that deserves to live on in infamy, from Trump’s July 22, 2020 interview with Siegel.

Bemused commented 2020-07-26 05:03:38 -0400 · Flag
Am watching the daily briefings on coronavirus, and hearing precious little about coronavirus. So far, he’s sticking to his notes but (Tick-tock, tick-tock, tick-tock …) he’s never been able to act presidential for more than ten days or so.

What will it be? Personally, I’m expecting more ramblings on: 1) testing being over-rated (he clearly feels he’s on solid ground, here); 2) miracle cures like hydroxycloroquine, disinfectant and UV light (ERs are dealing with people poisoned by bleach-based drinks); 3) the certainty that the virus will simply disappear (no empathy for massive losses due to illness and death), etc. Unfortunately, we’ll probably get mostly whining about being the victim of whatever.

His attempt to create a “law-and-order” thrust in Portland may be backfiring. The wall of moms has been joined by the wall of veterans.

Are they trying to co-opt Joe Biden’s quip about being cognitively tested each and every day?

scooter commented 2020-07-24 12:36:27 -0400 · Flag
@John McKee I think you’ve hit the proverbial nail on the proverbial head. He must have something on each of these people. Why else would they publicly disgrace themselves? If not money or something tawdry, I wouldn’t be surprised if Chump is acting as mob boss and warning people about their families having “accidents.”

John McKee commented 2020-07-23 23:06:45 -0400 · Flag
It is a phenomenon that I will never get my head around – that people of reputation, with qualifications and an OK career behind them, can tie themselves to the coat-tails of an obvious lunatic. They will never be able to rehabilitate or rebuild their reputations.

I can only think that blackmail is the glue that holds the whole ragged Trump operation together.