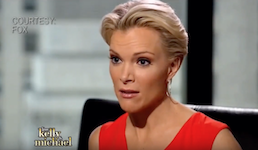 A video clip of Megyn Kelly’s upcoming interview with Donald Trump has been released. And in just 27 seconds, Trump told at least one whopper and one not-so-veiled threat against Kelly.

In the clip, Kelly asked Trump if his vitriol toward her was real or strategy.

Well, except when he does, as he did with Ben Carson and Chris Christie, e.g. And his whole on-and-off feud with Fox News.

Sadly, lies are so commonplace from Trump, they’re almost not worth mentioning. But with his very next remarks, Trump made it clear he wouldn’t hesitate to start attacking Kelly again, should the mood strike him.

TRUMP: See, I do, I do have a theory that, you know, when somebody does it – and this could happen again with us. I mean it could be. Even doing this particular interview. I have great respect for you that you were able to call me and say let’s get together and let’s talk. To me, I would not have done that.

If I were Kelly, I would not consider the hatchet buried between them. From the look on her face, I think she got the message.

Kelly called this clip “the most interesting part” of her Trump interview on today’s Live with Kelly and Michael. Which is an odd thing to do in a teaser. My theory: she wanted to highlight it, knowing that people will tune in for the rest of it regardless.

Trump is nothing if not unpredictable but if I had to lay a bet, I’d say he starts in on Kelly again before the election is over.

Watch it below, from today’s Live with Kelly and Michael, via The Hill.

John McKee commented 2016-05-11 19:47:19 -0400 · Flag
Try as I might, I cannot raise even the slightest blip of sympathy for creatures like the Kelly person, no matter what abuse and indignities are piled upon her. No sentient being could imagine for a moment that the Foxies and Foxettes truly believe they are working in a legitimate news organisation. The bald-faced lies; the difference in modus operandi apparent when interviewing ‘left-leaning’ (or, as I call it, ‘normal human’) guests and the parade of right wing haters; the obvious pandering to Ailes and his fellow dribblers when it comes to displaying legs and crotches at every opportunity – what could be more demeaning that accepting THAT as a condition of employment??

No, to this old boy, feeling sympathy for Kelly over her treatment by the Gilded Toad (I LOVE that moniker for Trump) would be rather like feeling sorry for Herr Goebbels after Adolf H Hitler hurt his widdle fee fees.

George Dimopoulos commented 2016-05-11 08:24:20 -0400 · Flag
She is just as bad as the rest of the Fox knuckleheads, I still remember the interview she had with some doctor that was leading the fight against Ebola and it makes me cringe….SHE was telling the doctor what he should be doing to stop the spread(like stopping all flights from Affected countries)just totally freaking out…and sure enough everything the doctor said would happen actually happened and it didn’t spread and kill everyone in America…as Megan was fear mongering…she was a total bitch! So it’s pretty hard to take her seriously or even respect her as a journalist,lawyer,presenter,doctor,scientist or what ever the hell she is.

David Lindsay commented 2016-05-10 00:25:24 -0400 · Flag
Kevin I’m kind of hoping that the Donald is the last republican troglodyte wheeled off the assembly line. Don’t get me wrong, this country needs a yin and a yang. A conservative and a liberal party. One of each. Any more is simply inefficient.
Ever since Ronald Reagan followed by George HW Bush, republicans have somehow got it into their thick skulls that anybody other than a republican in the White House is an illegitimate usurper. A rebel against all things republican/American.
The republicans need to rebuild.

I hope that Hillary puts a foot of foot up the Donald’s ass.

Kevin Koster commented 2016-05-09 23:41:04 -0400 · Flag
I find it fascinating that Trump supporters like Sean Hannity believe that he has any chance at convincing anyone he has the temperament to be President. Or that he’ll get women to vote for him.

I completely agree with Ellen’s conclusion. There’s no way he doesn’t throw another tantrum at Kelly before November.

One of the highlights of going out to the movies, the coming attractions.

I tell ya, give these assholes an inch and they’ll take a mile.

Matt Ssssjjjkkk commented 2016-05-09 22:14:01 -0400 · Flag
Is it just me or does Kelly seem to be morphing into a more balanced interviewer? I actually heard her mildly defend BLM tonight. Incredible. I guess she is moving to a more main stream network in the future.