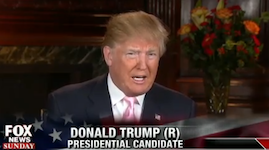 Donald Trump has not only refused to release his tax returns he refused to answer three simple questions about them: his gross income, his effective tax rate and how much he gave to charity.

On Fox News Sunday, after Trump blamed host Chris Wallace for his own ethnic slurs about a Hispanic judge on the Trump University fraud case, Wallace challenged Trump for refusing to release tax returns.

From the FoxNews.com transcript:

But you’re refusing to release any of your tax returns.

Back in 2012 when you were flirting with running for president, you said releasing your tax returns would be, quote, “a great thing to show how successful you are.”  I know you say you’re under audit.  You could still release them. The IRS commissioner says you could release them.

But let me ask you three questions which you can answer without releasing a ballpark figure.  2014, the returns that you have already filed under penalty of perjury, what was ballpark, what was your gross income?  What was your effective tax rate?  And how much did you give to charity?

Trump’s argument was that he’s just too awesome too much of a victim to reveal that information.

TRUMP:  OK, Chris, first of all, let me just tell you something, as you know, I have filed in—you know, unbelievable voluminous documents as to my net worth and as to the company I built, almost 100 pages with the Federal Elections Commission.  You know that’s been filed, right?

WALLACE:  I do know that.

TRUMP:  You talk about net worth.  You don’t learn—you don’t know that?

TRUMP:  I filed with—yes.  I filed as to my net worth and as to the values and everything else.  And that’s—and, by the way, people in your profession were unbelievably impressed with the company I built.

OK.  That has to do with net worth.  You can’t learn anything from tax returns without net worth or any of that.

The tax returns have—are being audited.  I’ve been audited for many, many years.  It is very, very unfair. I don’t know why, but for some reason, the IRS audits me virtually every year.

WALLACE:  But can you tell us what your gross income is?

TRUMP:  I think it’s very unfair.  I’ve been singled out.

WALLACE:  Can you tell us what the gross income is—

TRUMP:  I’ve been singled out—

WALLACE:  -- for 2014?  Can you tell us what your effective tax rate is?  And can you give us a sense of how much you gave to charity?

TRUMP:  Here’s what you do—go down to the Federal Elections Commission and take out my financial disclosure forms.

And I put down over 100 pages of investments and deals and everything else.  I have full disclosure.  He didn’t disclose.  Probably illegally, he didn’t disclose that he had a million dollars’ worth of loans at low interest rate.  So, don’t tell me about that.

TRUMP:  As far as taxes are concerned --

WALLACE:  I’ve got two more questions I’ve got to ask you.

This is the same Donald Trump who demanded that President Obama release his long-form birth certificate despite overwhelming proof that it was not necessary.

So while he’s at it, Trump ought to release the results of his birther investigation he claimed to be conducting in Hawaii – or else explain why he won’t.

Meanwhile, watch him try to weasel out of questions about his taxes below, from the February 28 Fox News Sunday.

Bemused commented 2016-02-29 05:29:09 -0500 · Flag
The fact that last years accounts are being audited should not prevent him from releasing those that have already been audited. Or not?
Rubio may be right in calling Trump a con man.