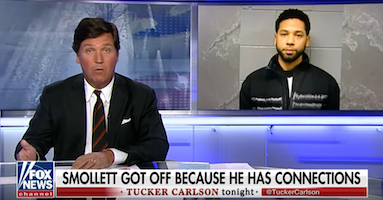 Donald Trump just moved to destroy millions of Americans’ health insurance, we’re still puzzling over the findings of the Mueller report, flooding in the Midwest is threatening at least a million wells used for drinking water, to name a few issues of real significance, but for Tucker Carlson, the most pressing issue of the day was charges dropped against Jussie Smollett, a Bigoted Black Behaving Badly, in Carlson’s view.

I am definitely not defending Smollett and I have no idea why charges were suddenly dropped against him today. Yes, it smells fishy. But the bottom line is, most of us don’t know what happened. Most importantly, neither does Carlson.

Yet, ironically, the network that has been rabidly attacking Democrats and other members of the media for supposedly prejudging Trump in the Mueller investigation now has no problem "convicting" a black man beyond a court of law – and further accusing him of getting off because he’s connected to some powerful black people.

And doesn’t it just figure that white-nationalist-hero Carlson would lead a cry of Black Bigotry? Although Fox called Carlson's commentary, "Tucker: Why aren't we laughing at Jussie Smollett?" it was pretty clear Carlson intended something serious as he began his remarks beside a large graphic, "WHITEWASH OF JUSTICE." I guess "blackwash" would have been too obvious.

Sure enough, Carlson made it explicitly about black bigotry and the oppression of white people - while claiming to know there was some kind of conspiracy among famous black people and the mayor and chief of police of Chicago:

CARLSON: You know exactly what’s happening here. Smollett isn’t getting off because he’s innocent. He’s not innocent. He’s something better than innocent. He’s famous. The charges against him were dropped because someone in power called someone else in power and said, “Let him go.”

None of this had anything to do with justice. It’s the opposite of justice. Even in famously corrupt Chicago, what was happening was just too obvious. The mayor and the chief of police pretended to be very shocked by this.

Smollett’s not going to prison. He was smarter than that. He knew he would never be punished. He knows Jesse Jackson. He’s friends with Kamala Harris and Barack and Michelle Obama. Don Lemon at CNN texts Jussie all the time on the cellphone and brags about it. Jussie Smollett may claim to fight for marginalized people but he is not one of them. In fact, he occupies the highest rank of privilege in our society. He’s above the law.

Increasingly, there seems to be quite a few people like that in this country. You’ll recognize them because they’re the ones always lecturing you about how bigoted and unfair America is. What they don’t understand is that they are proving that point.

Watch Carlson pull facts out of his you-know-what to do yet another solid for his white nationalist fanboys below, from the March 26, 2019 Tucker Carlson Tonight.

Kevin Koster commented 2019-03-27 13:27:52 -0400 · Flag
1. It’s fairly clear what happened in Chicago with the Smollett case. According to sources that were actually cited by actual news networks last night, the eventual outcome of a trial of Smollett was almost certain to be a sentence of community service – something that Smollett is already doing. Prior cases of false reports have been dealt with in this fashion. The DA’s office chose to avoid a show trial which would just waste everyone’s time and waste a LOT of money, simply to assign Smollett a punishment he already does, and a fine. So they kept his 10K and washed their hands of this. Smollett’s forfeiture of his bond is a direct indicator that he agreed to these terms, no matter what spin his attorney puts on it. And he’s ruined his career, so he’s not being rewarded in any case. Angry Right Wingers are upset that he’s not being thrown in jail for the rest of his life, but that’s their problem.

2. Tucker Carlson should spend a little more time reflecting on his own behavior, particularly the terrible quotes by him that he still hasn’t apologized for. He’s lost a fair amount of his sponsors and his only response has been to double down on his hatred and dog whistles. If I were him, I might think a little about where this is heading for him. Fox News may hang on to him for a bit longer, depending on how the 2020 election turns out, but he’s not looking at a long term future of being able to sustain this record. A humble public apology would be a much better idea for him.

Joan Pasley commented 2019-03-27 10:22:48 -0400 · Flag
Let us look at the big picture, Fox noise had responded this case from the beginning. They are out for blood and, like sharks smelling fresh chum, they hopped on it. Off topic, now their going after the atheist community, now.