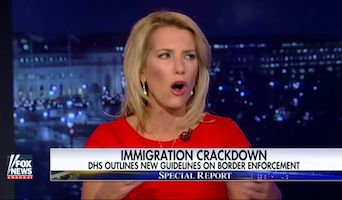 According to CNN, Laura Ingraham is about to get her own show at Fox News. She is reportedly set to take over the 10 PM hour from Sean Hannity. He'll move back into the 9 PM slot and The Five will go back to 5 PM.

The launch date for Ingraham's new show is unknown. But the sources said the new schedule is confirmed and known among senior staffers. This is a change from last month, when the talks between Ingraham and Fox were first reported.

CNN also reported that The Five has been losing to MSNBC's The Rachel Maddow Show, "causing no small amount of consternation behind the scenes."

Will Hannity be able to win back the hour? I'm not so sure. Stay tuned.

Although she can be critical of Donald Trump, Ingraham is a devout Trumper who was reportedly under consideration as White House press secretary.

But, as Media Matters noted, Ingraham has a long history of offensive, race-baiting, anti-immigrant rhetoric.

In other words, she'll fit right in with the rest of the Fox News prime time lineup.