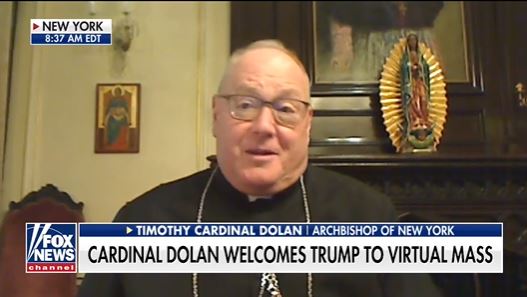 As members of the Donald Trump alternative reality cult, it’s no surprise that Fox & Friends welcomes fellow cult members, such as Catholic Cardinal Timothy Dolan whose reverence for cult leader Trump was clearly on display during Monday's Fox & Friends.

Dolan has long been a friend of Fox News.  He was especially close to the Fox head honcho and accused sexual harasser, the late Roger Ailes whose wife raised lots of cash for the Catholic Church. Dolan is so beloved on Fox that Fox host Martha MacCallum, in pimping Dolan’s papacy possibilities, described him as “a rock star.”

Dolan has a special place on Fox & Friends whose hosts have happily provided validation for Dolan’s crusade against the Affordable Care Act’s birth control mandate – a position shared by – wait for it – the GOP. The blending of Catholic dogma and GOP talking points was especially evident on Fox & Friends when, during a lie-filled attack on the new New York abortion law, right-wing Catholic co-hosts Brian Kilmeade and Steve Doocy urged the portly prelate to excommunicate NY Governor Andrew Cuomo.

Monday’s Trump/Dolan smooch-fest began with video from Dolan’s Sunday Sermon at St. Patrick’s Cathedral, during which he informed his virtual congregants that President Trump, his “former neighbor” was “worshipping by live stream.” He welcomed Trump and said that the Catholic Church is praying for him and his administration.

After Brian Kilmeade remarked that having Trump watch the Mass “must be pretty cool,” he reported that Dolan recently had a conference call with 600 Catholic leaders. Kilmeade did not mention that during that call, Trump described himself as “the best president in the history of the Catholic Church” – a claim based on nothing other than his say so. Dolan also praised Secretary of Education Betsy DeVos, HUD Secretary Ben Carson, and Trump adviser Kellyanne Conway as “cherished allies in our passion for our beloved schools” in the call.

A beaming Kilmeade welcomed Dolan and gushed about how Trump “saluted” Dolan on Twitter. Dolan then showed his love for his Fox “friends” in saying that he was “honored” to be their friend and missed hanging out with them.

The love-fest continued when Dolan said that it was great to have Trump watch the virtual Mass; but it would have been even more awesome if Trump had attended in person. More love: “I really salute his leadership.”

Dolan added that he also salutes the leadership of New York's governor and mayor. He noted that “the president seems particularly sensitive to the, what shall I say, the feelings of the religious community.” (Right, he needs their votes, duh.) After he cited the aforementioned conference call and another meeting of religious leaders, the love kept on coming: “I’m in admiration of his leadership.”

When cohost Ainsley Earhardt just happened to bring up the financial problems of Catholic schools as a result of the COVID-19 pandemic, Dolan said that if he were in the studio, he would give her a hug for her incisive question. He called this is “a tough fiscal time” for American religious congregations.

Dolan said that he’s worried that cash-strapped parents might not be able to continue to pay Catholic school tuition. But he takes comfort in the “heroic donors” and “the promise of our leaders and, as I said, especially President Trump who really shows a solicitude for the Catholic schools, Catholic charities, Catholic health care.” He added “Bravo.”

And being the – ahem- servant of the people, Dolan said that he is praying for those affected by and caring for coronavirus victims – but – at the same time he’s praying for money for the Church!!!

In finishing, he did acknowledge that people are hurting and the Catholic Church is making an attempt to provide food and services. “We don’t want to say the cupboard’s empty,” he said pointedly. That provided Earhardt the opportunity to encourage viewers to give to religious organizations. Lots of God blessing and that was that.

So Cardinal Dolan thinks that Trump has provided awesome leadership when, in the real world, Trump’s handling of the Covid-19 crisis has been full of denial and deception.  Obviously, Dolan has no problem with Trump’s constant stream of lies and personal attacks. It’s obviously not a problem for Fox News which is willing to spread the gospel of Trump by any means necessary – and that includes a very worshipful Catholic Cardinal!

Marge Arnold commented 2020-04-30 13:17:07 -0400 · Flag
Why do I feel that if this was Nazi Germany, he would of made a deal with Hitler instead of letting himself be taken away to a concentration camp during the anti-Catholic, anti-priest rodeo round up?

Eyes On Fox commented 2020-04-30 00:48:28 -0400 · Flag
BTW, not to be misinterpreted my last comment was referencing social media personalities I run into on Twitter and people I know personally out in the real world, not anyone here.

Eyes On Fox commented 2020-04-30 00:42:08 -0400 · Flag
It’s funny. While there’re things I disagree with Dolan in this clip, some minor mixing of religion with politics, unlike the reactions I’m seeing I think it’s pretty tame. To be clear I’m discussing what I’m seeing in the F&F softball interview video not Dolan’s past history which is another story that doesn’t need this clip to be discussed.

Take Fox News’ clips of Dolan praying for Trump. Forgetting the editorial content of him shouting out to Trump for watching the service stream (not a big deal either), it’s quite normal. True confession. I pray for Trump every Sunday. The Episcopal Book of Common Prayer liturgy includes a prayer for both the President and our Governor (a Democrat). Fox’s clip of Dolan was clearly edited so I’m sure he prayed for both too since our services are pretty much a word for word clone of the Catholic services.

Heck, Dolan even acknowledges both Cuomo and De Blasio. Sure, he’s praising Trump’s leadership but why do you think? He tells us. Trump is pandering to him like the Republican Party has for years. Trump gave him an attaboy. Where’s the Democratic outreach to religious leaders other than some black ministers? Not that Democrats do that for theological reasons like Republicans pretend to, no they’re just using ministers for activism in herding up the black vote.

All the money talk? Churches are charities. You want them to advertise like businesses? My tiny church just put out a report it’s quickly reaching the point it can’t pay staff so it took out a loan I know it can’t afford and slashed discretionary spending. Also, they’re letting us know the homeless shelter we support is in dire straights too. It’s the new coronavirus reality. And, yes, I wrote them a check (I should have used the cash to pay my taxes instead like a good Republican). Will need to donate more blood!

The thing that bothers me most is a bit of F&F hypocrisy. Dolan wishes he was in the studio to hug Barbie look alike Ainsley Airhead for bringing up charity needs. While I don’t make anything of it per se – it was harmless enough (Catholic priest molestation jokes aside) – it’s the sort of thing Fox News would throw a fit over if, say, Biden or Obama or (perish the thought!) Bill Clinton said.

Do I give evangelicals grief for their hypocritical moral eyeshades ignoring so much Trump immoral corruption? You betcha. But Democrats share a bit of blame for turning them into a loyal Republican voting block because, quite frankly, I think most progressives are completely intolerant of religion and want them as enemies.

John McKee commented 2020-04-29 23:21:00 -0400 · Flag
Seriously, who amongst us does not regard Timothy Cardinal Dolan as a shock-horror-vomit-inducing-scandal-cover-up-in-waiting?

scooter commented 2020-04-29 12:40:41 -0400 · Flag
IMO, organized religion, especially the catholic church and the evangelical movement, are nothing more than cons for suckers. True churches do not fleece their flocks, beg for money when they are rich beyond measure, and certainly don’t practice bigotry and racism. They encourage helping the poor and those in need. It is about giving, not taking.