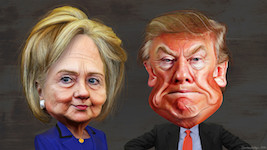 I know he's saying otherwise but I have a feeling Sanders will drop out tonight.

2:05 AM Update: Nope, Sanders is continuing.

Share your thoughts and observations in our comments section.

Caricature of Hillary Clinton and Donald Trump by DonkeyHotey via Creative Commons license.

Correction: I erroneously wrote that Bernie Sanders would be speaking at 11 PM ET.

David Lindsay commented 2016-06-08 20:35:14 -0400 · Flag
Michael Moore has admitted he made a mistake. Nader never did. And a lot of smug condescending Nader supporters came down off their high horse after they realized what a catastrophic clusterfuck W was.

John McKee commented 2016-06-08 17:13:54 -0400 · Flag
I’m with David Lindsay. All the arrant cheating by the R-Souls in Florida aside, Nader stuck a very deep knife into poor old Gore, aided and abetted by his dedicated publicist Michael Moore, “They’re both the same! Stay away from the Republicrats!”

I often wonder how much sleep the pair of them get, knowing what a disaster they visited upon the USA, the Iraqi people, the whole bloody WORLD. I suppose the crazy-headed PNAC cabal would have produced some other ignorant shit-kicker puppet to carry out their evil agenda four or eight years later, but still…

Kevin Koster commented 2016-06-08 13:34:41 -0400 · Flag
Sanders has flip-flopped about the superdelegates the farther the primary campaign has gone. First he was totally against them, saying they were preset for Clinton and against him. Then when he realized he couldn’t get the pledged delegates he needed, he began making noises about how he was going to get a lot of superdelegates to switch to him – and if he didn’t’, it would mean that everything was rigged against him. In other words, heads I win, tails you lose. He can’t have it both ways.

Regardless of superdelegates, Clinton handily won the nomination, culminating with what happened last night. She has more than a majority of the pledged delegates and has essentially won just with them. When the same situation happened with Obama and Clinton in 2008, Clinton graciously stepped aside and congratulated Obama.

In the current situation, I expect that after tomorrows’ discussions in DC (which were begged for by Sanders after he realized how badly yesterday was going for him), we will see Sanders commit to supporting the Dem nominee, which is now confirmed as Clinton. He will be thrown a few bones by the Dems in terms of the platform and who’s on the various committees, and he’ll get a prime time speaking position at the convention. There will be no contested convention – instead, Sanders will make an impassioned appeal to his supporters to not abandon the work they’ve been doing over the past year. He will remind them that a Trump presidency would mean that all that work was in vain. He will also remind them that voting for Trump would undermine everything they’ve done. In the end, most of his supporters will support Clinton, if only to make sure that Trump is soundly defeated and sent packing.

Ellen is correct that Fox News (and right wing radio)‘s coverage of the California primary was predicated on the assumption that Bernie Sanders was about to win a major upset and embarrass/humiliate Clinton on the moment she was confirming she’d landed the nomination. The right wing hope was that Sanders would come from behind in California and win either by a few points or many points – which would have furthered the right wing spin that Clinton hadn’t really earned the nomination. (The spin starting today is now playing that Clinton only gets votes because of sympathy for her over her husband, so that even if she wins the Presidency, it should have an asterisk next to it like the 1999 Spurs NBA Title.)

I’ll be very curious to see what happens after the conventions, but I expect, as I’ve stated throughout, that this will be the nastiest, most vicious presidential campaign we’ve ever seen. Trump has already indicated he is willing to get as far into the mud as he can, if he thinks it can somehow win him this office. I really don’t know what to expect out of a debate, other than to think that Trump will continue his practice of attempted bullying and insults, rather than any discussion of facts or policy.

Eyes On Fox commented 2016-06-08 13:18:01 -0400 · Flag
Mlp, Bernie is upset about the corruption keeping him from getting nominated. Namely super-delegates. Not the corruption sustaining his campaign. Namely inbred caucuses meant to ensure low voter turnout.

mlp ! commented 2016-06-08 09:59:02 -0400 · Flag
The Sander’s campaign main bone of contention is the ‘Super Delegate rule’, which they claim is the only reason that Hillary will win. As I perceive it, their plan now is to storm the convention and somehow using only reason, truth and smiles will convince the super delegates to switch their allegiance to Bernie.
Yeah, sure.
But, just like Nader, Bernie has FOR YEARS chosen to stay outside the Democratic party and has NEVER tried to work within the party to effect any changes to the super delegate system. Where were Bernie’s plans and preparation for this run prior to just over a year ago when he declared himself a candidate?
I’m not a fan of the SD rule either, but it has been in effect since 1970 and I’ve NEVER heard Bernie complain about it until this past year. Of course, he was always too good and pure for the Democratic Party so it is ironic to see a long-standing rule bite him on his wrinkly ass.

mlp ! commented 2016-06-08 07:30:10 -0400 · Flag
I was REALLY hoping that Bernie would show some class and call for the party to unite, but, unfortunately, such will not be the case. I voted for and contributed several times to Bernie but this last month has made me seriously regret that I did. I’m tired of the negative “Hillary is EVIL!!!!” campaign that the Bernie people have conducted lately, and I doubt that many of them have EVER voted before.

Eyes On Fox commented 2016-06-08 07:21:25 -0400 · Flag
I lasted until midnight. While the early California returns were expected to favor Hillary, they were so overwhelmingly for her I felt comfortable Bernie was done, put a fork in him. Particularly after his ass-whooping in New Jersey.

Though Bernie is never done. It’s like watching the classic SNL guest who wouldn’t leave skit. The only question is how far left out of the mainstream will he shove the Clinton campaign before he’s done tilting windmills.

While staunch Progressives – particularly the Bernie diehards – might find some salve in Hillary’s pre-speech propaganda video and many victory speech panderings, I suspect it wasn’t nearly enough to woo the liberal base with a case of the blues and it’s way off target for the many millions of independents she needs for a win who will recognize for what it is.

Meanwhile Trump’s base made up of the likes of Paul Ryan who calls The Donald a racist but plans to vote for him anyway is more unified, IMHO, than the press would pretend. Definitely more unified than the Democrats will likely be through July as Sanders continues his diaper dump. The more Bernie-fied Hillary becomes, the more terrified the right will become, the more likely they will hold their nose and vote for Der Furor, damn the bad luck he was nominated.

I’m more optimistic that Hillary will beat Trump but it’ll require him to dump last night’s teleprompter in favor of more characteristically thin-skinned meltdowns. And Hillary needs to quit pandering to women and minorities. Certainly her message of inclusiveness in contrast to bigot Trump’s opposite message is the correct foundation. But she panders and lacks passion. Last night she basked too much in personal glory. She needs to get over herself and tired party sloganeering.

David Lindsay commented 2016-06-07 23:28:10 -0400 · Flag
Since they announced yesterday that Hillary has enough delegates to take the nomination, today feels kind of anticlimactic.