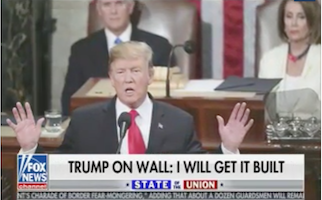 Fox & Friends host Brian Kilmeade started off the show this morning by weaponizing Donald Trump’s State of the Union address last night. Instead of just praising the speech, Kilmeade used its “greatness” to suggest those who didn’t applaud are not really Americans.

Predictably, the Trump Friends kicked off their show this morning by gushing over the State of the Union. “Overall, I thought it was great,” Kilmeade enthused. But rather than talk about what was so great, Kilmeade moved almost immediately into using that greatness to smear Democrats. After noting that the speech was the third longest in history, Kilmeade got down to political warfare, while feigning patriotism:

KILMEADE: Overall, you can't imagine a more comfortable situation where he knows millions are watching all around the country and around the world. And it was hard not to applaud on maybe two-thirds of that speech if you are an American.

Instead of challenging Kilmeade on that slur, cohost Steve Doocy helped amplify it by suggesting that Nancy Pelosi, the Democratic Speaker of the House, was one of those “un-Americans.”

DOOCY: Well, here's the thing though. I think he went into that State of the Union last night, and I think he was a little apprehensive. You know, Nancy Pelosi uninvited him to this thing a couple of weeks ago. And there he was. She had a tough time applauding for a lot of the things that he said.

KILMEADE: Nice of her to read along though.

DOOCY: She seemed a little awkward.

The Trump friends notably kept the attack on Pelosi and did not come out and suggest that the diverse array of freshman Democrats, Alexandria Ocasio-Cortez, Ilhan Omar, Rashida Tlaib, for example, are anti-American. But I doubt anyone in the audience thought the hosts were only referring to Speaker Pelosi.

Here’s your answer Kevin: FoKKKs Spews pundits — especially that perennial airheaded blonde bimbo Ainsley Earhardt (keep in mind, like Joe Wilson she was born and raised in South Carolina, a state that has a VERY HIGH population of rednecks) — ARE ALL CLOSET REDNECKS!

So not applauding for a terrible and dreary recitation of mostly vicious statements is somehow un-American?

Even if we were to go with Fox News wanting to get on a high horse about partisanship, how do they explain their support for all the GOP legislators who sat on their hands for all 8 of President Obama’s State of the Union addresses? How do they explain the Right Wing’s love for Joe Wilson’s pipsqueak scream of “You LIE!” during one of them?