Bombshell! Gretchen Carlson Claims She Was Fired From Fox News Because Of Roger Ailes’ Sexual Harassment 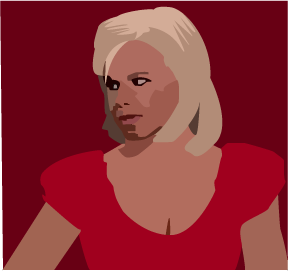 The legal complaint (embedded below) is detailed and full of juicy details.

When she was the cohost of Fox & Friends, Carlson complained that cohost Steve Doocy “created a hostile work environment by regularly treating her in a sexist and condescending way, including by putting his hand on her and pulling down her arm to shush her during a live telecast.”

Carlson also claimed Doocy “engaged in a pattern and practice of severe and pervasive sexual harassment, including, but not limited to mocking her during commercial breaks, shunning her off air, refusing to engage with her on air, belittling her contributions to the show, and generally attempting to put her in her place by refusing to accept and treat her as an intelligent and insightful female journalist rather than a blond female prop."

Carlson alleges that Ailes responded to her complaints about this treatment by calling her a “man hater” and retaliated by giving her less-desirable interviews, removing her from her weekly “Culture Warrior” segment on The O’Reilly Factor and ultimately firing her from Fox & Friends.

Carlson says that her next show, The Real Story,  aired at a less desirable time slot (2-3 PM ET) and that she took a cut in pay, even though her workload increased as a solo host.

Carlson accuses Ailes of “ogling her in his office and asking her to turn around so he could view her posterior,” “commenting repeatedly about her legs” and “lamenting that his marriage was ‘boring,’ ‘hard’ and ‘not much fun.’” Her complaint states that on “September 16, 2015, Ailes stated to Carlson: ‘I think you and I should have had a sexual relationship a long time ago and then you’d be good and better,’ adding that ‘sometimes problems are easier to solve’ that way.’”

As Media Matters details, Ailes has a long history of sexist behavior and misogyny, much of which was documented in Gabriel Sherman’s biography, “The Loudest Voice in the Room.” In February, I noted how female Fox personalities always just happen to have their skirts or dresses hiked up and their legs crossed, thus revealing maximum leggage.

This news helps explain various Fox events that have stuck in my mind:

d d commented 2016-07-06 20:06:46 -0400 · Flag
I was taken aback when I read about her lawsuit earlier in the day. And she mentioned something about how some other FOX “news” hosts got “support and promotion” because they did not “rebuff his sexual advances”. I bet these hosts are hoping that Ailes will settle the lawsuit (otherwise their names might be mentioned should the lawsuit proceed).

And what she said about Daddy Douchey! I always thought that he was a douchebag but wow! I took a look at Douchey’s Facebook page and, in his latest post about the 4th of July, he’s starting to take some hits in the comment section. Bwaaah!

Btw, Ailes has now come out with a statement. He denies it, of course. But then, so did BOR when Mackris filed her lawsuit against him (and that didn’t turn out so well for BOR).

“Gretchen Carlson’s allegations are false. This is a retaliatory suit for the network’s decision not to renew her contract, which was due to the fact that her disappointingly low ratings were dragging down the afternoon lineup. When Fox News did not commence any negotiations to renew her contract, Ms. Carlson became aware that her career with the network was likely over and conveniently began to pursue a lawsuit. Ironically, FOX News provided her with more on-air opportunities over her 11 year tenure than any other employer in the industry, for which she thanked me in her recent book. This defamatory lawsuit is not only offensive, it is wholly without merit and will be defended vigorously.”
http://www.mediaite.com/tv/roger-ailes-responds-to-gretchen-carlson-lawsuit-offensive-wholly-without-merit/

“Just before Ailes spoke out, his bosses — Rupert Murdoch and the two Murdoch sons who run 21st Century Fox — issued a corporate statement.

“The Company has seen the allegations against Mr. Ailes and Mr. Doocy,” the statement said. “We take these matters seriously. While we have full confidence in Mr. Ailes and Mr. Doocy, who have served the company brilliantly for over two decades, we have commenced an internal review of the matter.”
http://money.cnn.com/2016/07/06/media/gretchen-carlson-roger-ailes-lawsuit/index.html

Murdock has a building full of lawyers already on the payroll waiting for something to do.

Like when Bill O’Reilly had his out of court settlement, and a gag order not to say anything, odds are we’ll see the same here. It’s not the loss of money but the PR damage a book would cause if she talked while making her rounds on talk shows promoting the book.

“He always brags to people about how he doesn’t do polling or testing when he chooses his on-air talent. He told me that if he was thinking of hiring a woman, he’d ask himself if he would fuck her, and if he would, then he’d hire her to be on-camera,” the source said. “He then said if it was a man he’d think about whether he could sit down for a baseball game with him and not get annoyed of him. If he could, then he’d hire him.”

Keep your mouth shut for the time being. I’m sure you are full of juicy secrets that Faux would rather not see the light of day. Make them pay dearly for that. In the $M not the $K.

Roger being a misogynistic bastard and all-around pervert doesn’t surprise me. Who do you think came up with the short dress standard? It surprises me Doocy is a sexist a—hole to such a degree. He comes across as such a mushy suck-up pleaser on the air.

It makes me wonder now why Elisabeth Hasselbeck left “Fox & Friends” in such a mad rush.

Antoinette commented 2016-07-06 15:10:21 -0400 · Flag
Everyone at this hideous network knows what’s going on with Nixon Trainee Ailes. They know about his “private tables” with the boys. They stay silent for fear of losing their high salaries and positions.

Ailes is a useless, worthless, foul mouth cafeteria Catholic old pig who gets away with anything, and that’s the fault of Ruthless Rupert.

Nixon Trainee Ailes isn’t the only one. There are others involved, and all of them will be exposed to the global community for their treacherous behavior.

The boys at Fox are shaking in their suits. Carlson plans to expose them all to the masses, including the on-air mouthpieces.

The can of worms are now open.

A guilty plea would damage partnerships with colleges and universities that send students to this “network” for paid internships. The last thing a campus needs is to send their female students to a network whose leader faces charges of sexual harassment. Schools are already skittish when it comes to sexual harassment.

The next head of Fox “News” will clean house of the undesirables, and they certainly know who they are!

We anticipate the Trainee will be forced to step down from his position. The man is sick, tired and old, and needs to retire immediately.

You foolish, preying old crow. Karma is a b*&%#! We will celebrate at the nearest pub when you make your retirement announcement. Take Hannity with you.

This behavior from the boys has gone too far, and now it’s time to name names, and expose them all. Call out the married boys and their mistresses. Ailes took you down, now it’s time to take him down, and the others who stood by and said nothing, and we all know who the boys are!

NOTE TO MEGYN AND GRETA

What is more important? Your million-dollar paychecks or your principle? You both know what goes on, and you say nothing. Stand with Gretchen or stand with Ailes. If you both stand with Ailes we will personally call you out to the global community.

NOTE TO THE BOYS AT FOX

Gretchen won’t be the only one talking. You and this hideous network will be exposed for all your dirty deeds. Witnesses will be coming forward soon.

Warp Resident commented 2016-07-06 14:30:21 -0400 · Flag
Ugh, to think that a vile pig like Ailes would sexually harrass a woman, oh, wait, that’s believable. I hope she nails them to the wall, disgusting behavior by both of them. I don’t see why she isn’t also suing the network as well.