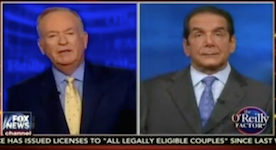 The news network that supported and encouraged (white) Cliven Bundy’s threats against law enforcement is still at war against #BlackLivesMatter because some fringe members chanted about frying cops “like bacon.”

Let me be clear. I abhor and denounce any kind of violence or violent rhetoric. And, yes, I think #BlackLivesMatter would be well served to explicitly denounce that language. But the official #BlackLivesMatter position advocates nothing of the sort. In fact, a recent Facebook post specifically rejects the notion that #BlackLivesMatter targets the police. “We’re targeting the brutal system of policing, not individual police. ...This is a vision of love. As Black survivors of White supremacy, our hearts go out to all victims of violence,” it states.

When you put that episode in its larger context and juxtapose it with Fox’s ongoing tolerance for violent threats towards just about anybody its readers dislike, Fox’s obsession with the one clip of a group of chanters is disingenuous at best.

That includes Bill O’Reilly. You may recall that he recently vowed to put #BlackLivesMatter “out of business” and threatened to put “any media person who supports them” on the program and “put their picture right on the air.”

Well, I’m still waiting for Roland Martin to appear on The Factor. Martin hit back at O’Reilly’s threat with a scathing response and asked to debate O’Reilly “any time, any day.”

O’REILLY: In a demonstration in Minnesota, they [#BlackLivesMatter] called for cops to be killed, that’s what they did. And Colin Powell’s going out and saying, “Hey, that’s OK with me.” Come on. I mean, I was upset by that. I think General Powell needs to apologize to the American people.

It’s bad enough that O’Reilly should be whitesplaining to Powell about what he should support or not. But O’Reilly’s description of Powell’s support is a distortion. Powell said the movement and the “Black lives matter” slogan is what he’s OK with, not the "fry them like bacon" chant. Powell also spent more time denouncing O’Reilly’s pet Black peeve: black on black crime.

Here’s the exchange from Powell’s appearance on Meet the Press on Sunday:

What do you make of the Black Lives Matter movement?

The Black Lives Matter, that’s a way of capturing the essence of this problem we have, where blacks have been killed by police officers in a way that doesn’t seem appropriate. Not that killing is appropriate in any circumstance. And so I don’t mind the slogan, and I don’t mind the movement, because it draws attention to a problem.

But the greater problem is violence in our society. Black-on-black violence is worse than white-policeman-on-black violence. And when you see what’s happening in every one of our cities every weekend, Washington D.C., right here, you’ve got to start asking yourself, “Is there something we can do to reduce the violence? Is it gun control?”

Or more importantly, is it teaching our children a different way? Is it giving people more opportunities to have jobs and to have stable communities and stable schools and schools that work? How do we restore the families in our country? Not just black families that are not as intact as they used to be, you’ll see the same thing happening in Hispanic families and in white families.

Instead of O’Reilly being thrilled that Powell endorsed O’Reilly’s own cause, he seized on Powell’s broad and not exactly fervent support for #BlackLivesMatter – and then used that to attack him.

But, nah, I’m sure it has nothing to do with race.

Watch O’Reilly attack Powell below, from the September 8, The O’Reilly Factor, via Media Matters.

Yes, BOR, there are dishonest media outlets trying to pass off spin/lies as fact – you and your “O’Reilly Factor” are absolute proof of that. Shame on you for purposely distorting Powell’s words to the folks.