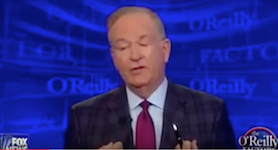 Nobody should let Bill O’Reilly – the guy who has practically made a career out of stopping people from saying “Happy Holidays” - accuse the left of stifling free speech and putting the country in danger of becoming a “totalitarian society.”

O’Reilly noted that CNN’s Don Lemon and “The View” host Raven-Simoné recently were subjects of Change.org petitions calling for them to be fired after they expressed unorthodox views about a recent video showing a cop manhandling a female high school student in class. When the story broke, Lemon advised viewers to reserve judgment of the officer until all the facts were known. Simoné said that while the cop’s actions couldn't be justified by whatever the student had done, the student should have stopped talking on her phone when asked.

You could say the people who drafted the petition and those who signed it are being absolutist in their views. But O’Reilly seems to believe that a bunch of Internet users signing an online petition disapproving of something you said is an infringement of free speech.

HuffPo author Gabriel Arana goes on to point out that “the First Amendment of the Constitution forbids the government from interfering with your freedom of expression. Nowhere does it say other citizens aren’t allowed to disagree.”

But O’Reilly was too busy trying to scare his viewers into hating liberals (more) to pay attention to the Constitution.

O’REILLY: Freedom of speech in this country is under attack and it's under attack primarily from the left. And the facts are there. The left does not want to hear dissenting opinions, and if you put them out, they will try to destroy you.

I will grant that there’s intolerance on the left. But they hardly have a lock on it. Bill O’Reilly, himself, can't tolerate people saying “Happy Holidays” instead of “Merry Christmas” and he has boasted about forcing Rhode Island to change the name of its “holiday tree “ to “Christmas tree.” Even worse, just a few hours after O’Reilly’s show, Sean Hannity used Quentin Tarantino’s estranged father to advance Fox’s campaign against the director for having called some police officers “murderers.”

If Fox News’ Juan Williams noticed the hypocrisy, he kept it to himself. “The left’s tried to destroy me,” he said. He did start to mention that the right wing uses mail campaigns to demonize the left but O’Reilly silenced him by saying there’s no comparison.

INGRAHAM: This is a left-wing shaming industry where they seek to shut down dissenting opinions. We see it happening with the speech codes on college campuses, with the changing of the pronouns. If you say something that is even slightly objectionable to one person, you’re a hater, you are branded as disloyal to the sense of community on campus.

Watch it below, from the November 2 The O’Reilly Factor.

The liberal conspiracy to squelch free speech in America is broader than I ever imagined. Apparently Kirsten, et al are enamored with Rush because he’s a courageous voice in the wilderness breaking the liberal mainstream “monopoly” on information which in the past, I’m to suppose, brainwashed our citizenry.

The irony, of course, is if you visit liberal blogs like Daily Kos you’ll see Progressives doing their own diaper fills over the same sources as being conservative “corporate media” which they don’t trust either. ;^)

d d commented 2015-11-04 09:04:16 -0500 · Flag
It would appear that BOR doesn’t realize that petitions are one way that regular folks can exercise their “freedom of speech”. Never mind the fact that the right of “freedom of speech” is meant to protect us from the government curtailing what we say and punishing us for our words. People do not have the right to say whatever they want on a TV show and be exempted from any kind of criticism and/or not be subjected to being fired.

What screams hypocrisy is that this is the same BOR who worked to get college professor, Ward Churchill, fired when BOR didn’t like what he said about the 9/11 victims.

And what makes his hypocrisy even more absurd is that this is the same guy who used his own freakin’ petition process to encourage NBC/MSNBC to fire OLBERMANN simply because he did not like what OLBERMANN was saying about him!

If BOR is so concerned about a “totalitarian society” perhaps he should look to his own behavior as an example of just that – and Juan Williams should have been calling him out on it! But, no, Williams was too interested in playing the victim card too.

What this incident showcases is that BOR is okay with freedom of speech when it agrees with his own opinion (and/or the prevailing opinions at FOX “news”). Since what Lemon and Symone said is something that BOR agrees with, he has decided that he will defend them against the liberal Change.org petitions. BOR has shown that he can be very selective with regards to whose “freedom of speech” he will defend and whose he will attack.

Btw, didn’t Ingraham write a book in which she went off on entertainers and Hollywood types who used their celebrity to speak out on political/social issues? Yeah, she did and she titled the book “Shut Up and Sing”. Rather ironic that she is on BOR’s show presenting herself as being in favor of “freedom of speech”. Pffft.

And one more thing – since BOR is presenting himself as a defender of “freedom of speech”, why isn’t BOR challenging Ben Carson on his vow that he will use the Department of Education to monitor colleges for political bias? Or is BOR okay with that idea because we all know that, in reality, what Carson wants to suppress is the expression of liberal ideas on campus (something that BOR has long complained about)?

The below Salon article calls out both BOR and Carson…

That’s why they feature a show like “The Five” with 4 conservatives versus 1 liberal or RINO poser. Or “Outnumbered” which is pretty much the same though the title pretends to address gender bias, not political bias. Or the fact all their hosts are conservatives. The manner they filter news is conservative. The way they approach news is conservative. As you pointed, out “Fox News Sunday” goes Democrat-less quite a bit. Not to mention the ratio of cons to lib guests on all their shows is completely out of kilter.

NewsHounds posted about Bill O’Reilly Accuses Liberals Of ‘Attacking’ Free Speech – While Fox Wages War On Quentin Tarantino For His Speech on NewsHounds' Facebook page 2015-11-03 19:56:36 -0500
From the guy who can't stand it when people say, "Happy Holidays."