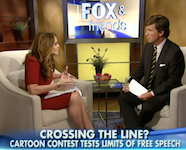 Extremist Pamela Geller was back on Fox News yesterday, this time to defend an armed anti-Islamic rally in Phoenix. Host Tucker Carlson clearly had his concerns about the event. But that didn’t stop him from using Geller to dishonestly smear Democrats.

The anti-Islamic Phoenix protesters were urged to bring guns to a rally outside a mosque. Yet, in his introduction, Carlson described the event as a “freedom of speech” rally.

“The implication is, this wasn’t good judgment,” Carlson noted. He added, “It seemed to exist only to generate controversy.”

But why let an interview with a conservative wingnut go to waste? Carlson moved on to use the segment and the Phoenix protest to bash Democrats.

CARLSON: Of course, it’s free speech. I don’t even think reasonable people would disagree with that. And yet - I didn’t think that – a survey, a recent survey showed that the majority of Democrats, asked in this poll, said they thought speech they disagreed with ought to be banned, ought to be illegal.

That appears to be a gross distortion of the poll results. Carlson is probably referring to this YouGov poll, from earlier in the month. The poll question was not about banning speech anyone “disagreed with,” as Carlson said, but about a law banning hate speech: “Would you support or oppose a law that would make it a crime for people to make public comments intended to stir up hatred against a group based on such things as their race, gender, religion, ethnic origin, or sexual orientation?”

And while there was, as YouGov pointed out, a partisan divide, enough Republicans supported such a law so as to result in a plurality of Americans (41-37%) supporting it.

After his false description of the poll results, Carlson then blatantly prodded Geller to use it against Democrats. He asked, “Does that surprise you?”

Geller complied. “No, it’s the party of treason,” she responded. There was no challenge or objection from Carlson.

It wasn’t until Geller claimed, “It is the Sharia. They (the left) are imposing the Sharia,” that Carlson interrupted. Not to challenge her hideous, anti-American statement, but to ask if there was anything she thought should qualify as hate speech.

No, doesn’t believe in banning any speech. She said, “The antidote to bad speech is more speech.”

“So no. I know that my ideas are better,” Geller claimed.

There was neither objection nor challenge from Carlson.

Do you think that if a group of armed Muslims surrounded a temple to protest Jews and Israel that Geller would think so kindly of free speech?

Watch it below, from yesterday’s Fox & Friends.

Peggy Sorensen commented 2015-06-01 15:36:02 -0400 · Flag
Pam Geller is a nutjob who stirs up anti-Muslim hatred professionally. To her mind the only decent Muslims are those who have forsaken Islam. Anyone who gives her a forum should be wary. Fox also failed to note that there were reportedly more Christians there in support of the worshippers inside the mosque than armed haters carrying weapons—something of which we, as Americans, can be proud.

Joseph West commented 2015-06-01 02:57:01 -0400 · Flag
And Geller should realize that as long as she’s able to walk around the streets where people can see her scary face instead of being hidden behind a niqab or she’s being allowed to walk around in regular street clothes instead of a burqa, any claims of Sharia’s being imposed are nothing more than the rantings of a mentally disturbed individual.

Joseph West commented 2015-06-01 02:53:35 -0400 · Flag
Yaghoub. You might consider that Jewish men HAVE spit on little girls walking to school and have slashed tires and even thrown objects at cars that have travelled through their neighborhoods on the Sabbath.

Oh, and a JEW went through an Israeli Pride parade with a knife threatening the lives of LGBT participants.

And, under strict interpretations of JEWISH Law, all “graven images” are prohibited. In the wrong neighborhoods, posters featuring people (prophets or otherwise) will be defaced or taken down and destroyed.

Don’t act like Jews are any less likely to have fundamentalists. Theirs are currently behind the majority of the troubles besetting Israel. Reform and even Conservative Jews are less likely to settle in the Occupied Territories; the overwhelming majority of West Bank settlers are Orthodox (and ultra-Orthodox) Jews.

Israel has killed Americans who voice their free speech in opposition to the actions of the Israeli govt.

Khalifah Mohamed commented 2015-05-31 19:09:44 -0400 · Flag
Pam Geller, like James Brown said, This is a
Man’s World and it won’t be nothing without
a woman or a girl. Well, if women were in charge
the way you’re talking. There’s no hope for the
Human race. Women, mother’s are the first
Teacher of Children. Its time to teach them well,
to have dignity and respect for others. So, we all
Can get along together. So, Human Beings!
Stop Your Evil! Be Believers!

Khalifah Mohamed commented 2015-05-31 18:52:57 -0400 · Flag
Pam Geller, time for you to make change!
This is no game of roulette by with human
Lives int the name of free speech
Destroy the goodness of the human race
Projecting so much hate, she’s dooming
Her own fate!
Well, this woman, who is a Muslim Woman is going to
tell you, you need to get her mind and heart straight
Before its too late, Stop Your Evil! Believers!
Do something constructive with all that energy, and
Leave the people in Islam alone.
Peace Be upon You!

Khalifah M. Mohamed,
1st woman on the 1st
neighborhood watch
Established in the
State of Florida 1989

Yaghoub Sharifi commented 2015-05-31 18:28:12 -0400 · Flag
You asked: “Do you think that if a group of armed Muslims surrounded a temple to protest Jews and Israel that Geller would think so kindly of free speech?”
Well, this is a very stupid question because Jews have never threatened to kill people who draw cartoons of their prophet!
Islamic fundamentalism is the greatest threat for free speech and you dummies (or cowards or traitors or all of the above!) are blaming Pamela Geller and Fox?!

NewsHounds posted about Anti-Islamic Nutjob Pamela Geller Gets Friendly Fox Platform To Accuse Liberals Of ‘Imposing The Sharia’ on NewsHounds' Facebook page 2015-05-31 15:45:07 -0400
Do you think if armed Muslims protested Geller's temple that she would be endorsing such an event?