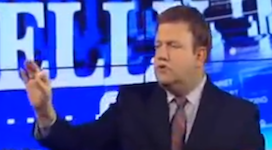 Frank Luntz showed up with another fishy focus group last night that just so happened to be almost entirely critical of President Obama’s State of the Union address.

As he has previously, Luntz never told us the exact makeup of his group, other than to say that “half of you voted for Barack Obama.”

That begs the question as to how many of the group’s members were actually Democrats. Especially considering that very few had anything good to say about President Obama or his State of the Union address.

But even if half were Democrats, that would still skew the focus group improperly in favor of Republicans. In the first place, President Obama won in 2012 with 51% of the popular vote, not 50%. The margin was even greater if you go by electoral college. But even that is not representational of our country. According to Gallup, party affiliation in the U.S. is 27% Republicans, 31% Democrats and 41% independents.  When you include “leaners,” the makeup is 41% Republicans and 45% Democrats. There was a swing to Republicans around Election Day but on the whole, Democrats and those who lean Democrat consistently outnumber Republicans and those who lean Republican.

Luntz began the segment by saying, “I love it that we get to start with the American people rather than the politicians or pundits.” This, as he deliberately pulled the wool over the eyes of viewers.

Still, even that stacked deck was not stacked enough for host Megyn Kelly. After the focus group came up with mostly negative comments about Obama’s State of the Union, Kelly jumped in with this “question”:

KELLY: What do you make of the fact that we’re seven years into the presidency now and the president tried to tap into his historic speech back in 2004 – there’s no black America, there’s no red America – and talked about how we shouldn’t be demonizing each other.

Rather than leave it there, “straight news anchor” Kelly continued by giving the anti-Obama message a little push:

KELLY: I mean, we’ve already heard some pundits say he has done plenty of that and so how can he legitimately call for people to stop? What were your thoughts on it?

You can probably guess what the panel said.

Watch it below, from the January 20 The Kelly File.

Kevin Koster commented 2015-01-22 15:02:27 -0500 · Flag
Richard, you’re not nitpicking. I agree with you that Big Oil has repeatedly played this game – although I don’t think they did it in 2012. During that cycle, the right wing approach was different. Big Oil kept the prices high all the way to Election Day, I believe in the hopes that it would convince the country that things were tough under President Obama and would be tougher still under a second term. And it also would help make it harder for certain groups to make it to the polls, as the right wing was hoping they’d be discouraged and not show up. (This was at the same time that the right wing pollsters were doubling down and predicting that Romney landslide. Which even they admitted later was another tactic to try and help push Romney’s voters up and push the Dem voters down. I believe that secretly, they were terrified that 2012 would be a repeat of 2008, which turned out to be the case in terms of the Presidential race.)

I remember that during the summers of 2005, 2006 and 2007, the gas prices would go through the roof during the summer months when people would be driving and travelling the most. In 2007, this got so bad that my father lent me his Costco card as the prices were slightly lower there. The prices would then drop back down in the winter months, although never to as far down as they’d been before the skyrocket. I remember that when people would call the oil companies out for this obvious gouging, right wing pundits would chastise the public, saying that the oil companies were just doing the best they could in the global market, or that there were other circumstances we couldn’t possibly understand, or the old standby – let’s go drill in ANWAR. I remember that the drop in prices didn’t help the GOP in fall 2006 as the public was completely fed up with Bush and his wars by that point. And the drop in prices did nothing for McCain for the obvious reasons of the massive recession, the general public dislike of Bush and his Administration at that point (with approval ratings down in the low 20s!), and the fact that the public wasn’t convinced that McCain and Palin had any clue whatsoever of how to get us out of the wars, out of the recession, or anything else.

Richard Santalone commented 2015-01-22 09:30:36 -0500 · Flag
From Kevin Koster’s comment: “…(Of course, Hannity would conveniently forget to mention that the prices had regularly skyrocketed under George W. Bush but had suddenly dropped right before the 2008 election…)…”

With all due respect Kevin, yes, I know I’m nitpicking here, but actually gas pump prices DROPPED VERY STEEPLY NATIONWIDE from late July 2006 to November 7, 2006 (i.e. Election Day). I don’t know how much they went down in your neighborhood, but during the time period I just cited, I was working in Englewood Cliffs, NJ. In late July 2006 the price for 87 octane gas there was $4.50/gal. On November 7, 2006 (i.e. Election Day) the price for 87 octane gas plummeted to $1.90/gal. Mark my words Kevin: anyone (especially Republicans) who tells you that this was not due to Big Oil trying to help Republicans hold onto Congress is either LYING TO YOU or is simply TOO DAMN STUPID to know better.

All the way up through 2013, Fox News and AM radio were bent on attacking President Obama over the price of gasoline. Sean Hannity repeatedly used the canard of comparing the price of gas in January 2009 to wherever we were as a way of saying that it was “SKYROCKETING” under Obama, and yelling about how we were about to see gas prices over five dollars a gallon. (Of course, Hannity would conveniently forget to mention that the prices had regularly skyrocketed under George W. Bush but had suddenly dropped right before the 2008 election…)

So, by Hannity, if the gas prices were high after January 2009, that would automatically be Obama’s fault. Okay.

As of 2014, gas prices started dropping again, even dropping down near 2 dollars a gallon. Does Fox News or AM Radio then say “Look, the prices have dropped under President Obama’s watch. We’ll have to grudgingly apply the same standard and give him credit for it”? Of course not. The new mantra being heard across right wing media, including from Hannity, is that the drop in prices has nothing to do with President Obama, and he’s just trying to somehow take credit for things that were done in spite of him.

Kevin Koster commented 2015-01-21 20:04:26 -0500 · Flag
Fox News and right wing radio had already condemned President Obama’s SOTU speech before Monday morning. Limbaugh even made a point of repeating his hateful yell of “I HOPE HE FAILS!” before noting that he didn’t intend to watch it at all.

Frankly, the oddest thing about the actual SOTU event was how obvious it was that the GOP members were being careful to only give a positive response when the military and/or veterans were mentioned. Otherwise, the pans across the audience would show standing/applauding Dems and angrily seated Republicans who sometimes gave slight applause and sometimes just sat with no response. This is why Boehner’s pained expression for much of the speech was so interesting to see. He clearly knew he was expected by the GOP to show disapproval. But he also knew he was going to be preserved forever doing so. So he wound up somewhere in the middle.

It’s also interesting to note Fox News and right wing radio happily supporting Boehner’s presumptuous move to bring Netanyahu to Washington on his own. I wonder how they would respond if Nancy Pelosi had done such a thing during the George W. Bush presidency. In fact, I recall the same pundits’ heads exploding when Dems visited foreign heads of state and went to Iraq and Afghanistan.

As far as Frank Luntz is concerned didn’t he say he was giving up politics after the last election and work for some sports website?

Bemused commented 2015-01-21 12:18:40 -0500 · Flag
@doors17: After the first guffaw of laughter, I realised how right you are! FoxNews is truly a blight on the panorama of life on this planet. It’s gotten so bad that I can no longer bring myself to watch the clips. Reading the texts is quite enough pain.

Bemused commented 2015-01-21 08:15:06 -0500 · Flag
I just viewed a rerun of the SOTU on CNN and was fascinated by Boehner’s face and body language. My impression is that he wished he had a (D) after his name. The President pushed an awful lot of buttons that the Republicans will find it awfully hard to disconnect.

On CNN, the lady host from Hong Kong is trying hard to get her crop of pundits and guests to come down hard on the President but they’re not obliging. I’m getting a feeling a disconnect between her leading questions and the answers.

NewsHounds posted about Another Suspicious Fox Focus Group Attacks Obama’s State Of The Union on NewsHounds' Facebook page 2015-01-21 01:32:35 -0500
Fox pretends that half a group of Obama voters is fair and balanced - but it's not.