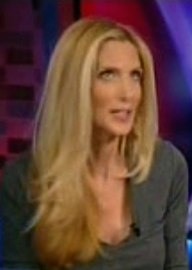 One day after her geography fail on The O’Reilly Factor, Ann Coulter was back on Fox News, this time as an expert on how to deal with the Ebola epidemic in Africa.

On Saturday night, Judge Jeanine Pirro hosted Coulter so that we could all get the benefit of her uninformed, unqualified thoughts on fighting the Ebola outbreak in Africa. Not surprisingly, Coulter's "insights" mostly consisted of mean-spirited barbs against the Obama administration.

But Pirro turned a blind eye to the expertise of her “expert” witness. She opened the discussion  - which also included a real doctor – by saying, "Alright, Ann, travel ban, yes or no?”

“Dr.” Coulter replied, “Uh, yeah!” to let us know that it’s a no brainer for anyone with the kind of grasp on the situation Coulter was pretending to have.

Coulter said it “enrages” her that the military has been sent to West Africa. “The way we help the rest of the world is by developing a cure," she proclaimed. "We didn’t discover the cure to AIDS by having scientists hang out at Studio 54.”

Appreciative laughter was heard off camera, probably from Pirro.

Coulter claimed that all the military “can be doing” is “changing bedpans.”

Coulter must have been so busy thinking up her Studio 54 bon mot, she didn’t have time to find out what the military really is doing. Had she bothered, she could have discovered what I found via a quick Google search. From Slate:

Though troops are prepared to suit up to keep them from contracting Ebola, the scope of the military operation is intended to limit their direct interaction with patients. Their mission is to help build infrastructure and care facilities and to work with public health organizations on transportation.

But Pirro, the former judge and prosecutor who was married to a mobster and thug for over 30 years, either didn’t know how wrong Coulter was or didn’t care. “It’s frightening, isn’t it?” Pirro asked.

“It doesn’t contradict the thesis that Obama hates America and wants to do everything to hurt it,” Coulter said. Of course, Pirro did not object or challenge Coulter. Apparently on Fox, a real patriot role-plays as an expert on a serious subject like Ebola, doesn't read up on the subject before going on the air with her opinions and then making snarky jokes about the whole thing.

But wait there’s more. After showing her own utter lack of understanding of the situation, Coulter went on to complain about the newly-appointed Ebola czar not being knowledgeable enough about the disease. She sneered, “Now we get this political hack, Ron Klain, whose – you know – main claim to fame is trying to exclude military ballots in the 2000 election.”

Said the woman who skated away from two voter fraud investigations after she voted where she admitted to not living. Twice.

And Pirro joined the hypocrite club. She said, “Isn’t it frightening, Ann, that you’ve got Ron Kalin – the guy has no medical, no military experience.”

Oh, if only Kalin accused Obama of being a secret Muslim or a racist he could probably get his own Ebola special on the "fair and balanced" network!

Watch what Fox considers legitimate analysis below, from the October 18 Justice with Judge Jeanine show.

Antoinette commented 2014-10-21 04:38:51 -0400 · Flag
Hannocchio’s long time girlfriend Annie may not know anything about Ebola, but she is an expert in pot. She would travel to see Grateful Dead concerts and sit among the potheads.

She does look anorexic, Jan. You can see her veins through her skin. The years have not been kind to Annie. Studio makeup covers up her imperfections in the face.

NewsHounds posted about Ann Coulter Is Fox News’ Latest Ebola Expert on NewsHounds' Facebook page 2014-10-20 09:00:12 -0400
Once again, the only qualification that counts on Fox is creativity in smearing the Obama administration.