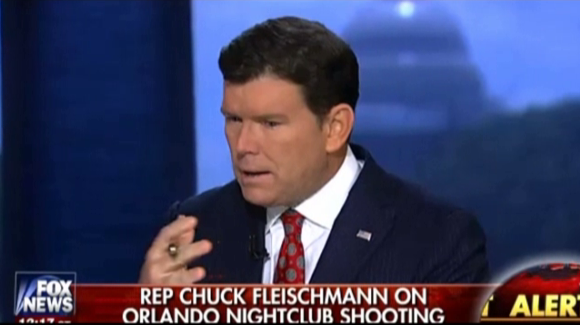 Fox News has already started up its “Obama won’t say the magic words to keep us safe from terrorism” meme again. During coverage of the horrific Orlando mass shooting, “objective” anchor Bret Baier all but asked a Republican congressman to attack Obama on that point.

As he waited for Obama to speak about the tragedy, Baier wound up his interview with Rep. Chuck Fleischmann (R-TN) with this “Cavuto Mark” of a question:

BAIER: When you hear authorities, you know, kind of cautious about the semantics here and very, you know, very cautious about whether it’s a hate crime or whether this guy was inspired by or directed by ISIS, what goes through your mind?

Right on cue, Fleischmann said this, though it was obviously not as anti-Obama or as partisan as Baier almost certainly hoped.

Given that Fox’s man, Donald Trump, is known for his bigoted hate mongering, get ready for vileness dialed up to 11.

Watch it below, from Fox’s June 12 coverage of the Orlando shooting. I apologize for the poor audio.

What I found interesting about his spin on FOX’s more mainstream show was how he seemingly bent over backwards not to exploit this tragedy politically. Which I found odd since this would seem ideal for the standard GOP TV anti-non Christian nationalistic talking points and spin. Didn’t take long to see Baier’s dilemma.

The shooter is an American citizen. While early, I don’t think there was anything but an expectation he bought his guns legally. The standard NRA talking point of if someone was carrying a gun at the club it all goes well fails because there was an armed police office on site with 2 others as backups who engaged him. Still a fail.

So no surprise his ‘let us all not exploit this for politics’ was putting a damper on gun control. Yeah, no politics.

Mein Drumpf is joining the NRA chorus gun control wouldn’t prevent this. Certainly selling an AR-15 and a handgun or two to a guy on a terrorist watch list is pointless, eh, Donald?

But Donald says the guy could have used something else. Maybe he’d kill 50 people with a knife? Hmmm… In fairness The Donald mentions explosives but what’s easier than buying an arsenal of guns in America? No special skills required. And what Trump will never admit is after Timothy McVeigh we did pass legislation regulating bomb ingredients used in the production of fertilizer to prevent some right-wing anti-government extremist or gay hater from blowing up innocents on so massive a scale again.

Will any of the pathetic faux liberals FOX News will trot out to pretend to present the other side mention any of this? Oh, of course not. Can’t wait for Pat Caddell to rage, too, it’s all Obama’s fault. Or maybe Hillary’s this time.

And I’m wondering if that’s not what happened. The police may be taking their time in order to map out the trajectories of several weapons: those of the gunmen and those of any clients of the club who may have been armed. A professor from Maine called that “a circular firing squad” during an interview I saw about a month ago.

John McKee commented 2016-06-12 17:52:22 -0400 · Flag
Damn those ‘I made a billion in five minutes flat’ spammers to hell. We appreciate what a pain it must be for Ellen & Helpers to be constantly having to delete their crap, but it doesn’t stop the normally useful email alerts from being bombarded.

And, as usual, Faux sNooze is behind.

From the Associated Press:

President Barack Obama says the nightclub shooting in Orlando was an “act of terror” and an “act of hate.”

He said Sunday that the FBI is investigating it as an act of terrorism and that no effort will be spared to determine whether the shooter was affiliated with terrorist groups.

Obama is speaking at the White House after 50 people were killed overnight at a nightclub in Florida. Officials have said 53 more are hospitalized.

Obama is noting that the killer targeted a gay nightclub. He says it’s a “sobering reminder” that an attack on any American is an attack “on all of us.”

It was unclear whether the shooter who killed at least 50 people in an Orlando, Florida, nightclub was associated with a radical religious organization. President Barack Obama addressed the nation, calling the shooting “an act of terror” and an “act of hate.”

Trump tweeted as Obama began speaking: “Is President Obama going to finally mention the words radical Islamic terrorism? If he doesn’t he should immediately resign in disgrace!”

David Lindsay commented 2016-06-12 15:19:28 -0400 · Flag
Faux is in a sticky situation here. Yes I think this is terrorism. But I also think it’s a hate crime as well. A hate crime is a specialized form of terrorism. But the orthodoxy of Faux does not recognize hate crimes.

If there were a serial killer specializing in killing conservatives, Faux would recognize hate crimes as being real in an instant. But since hate crimes don’t affect them personally, there is no need for hate crime laws.