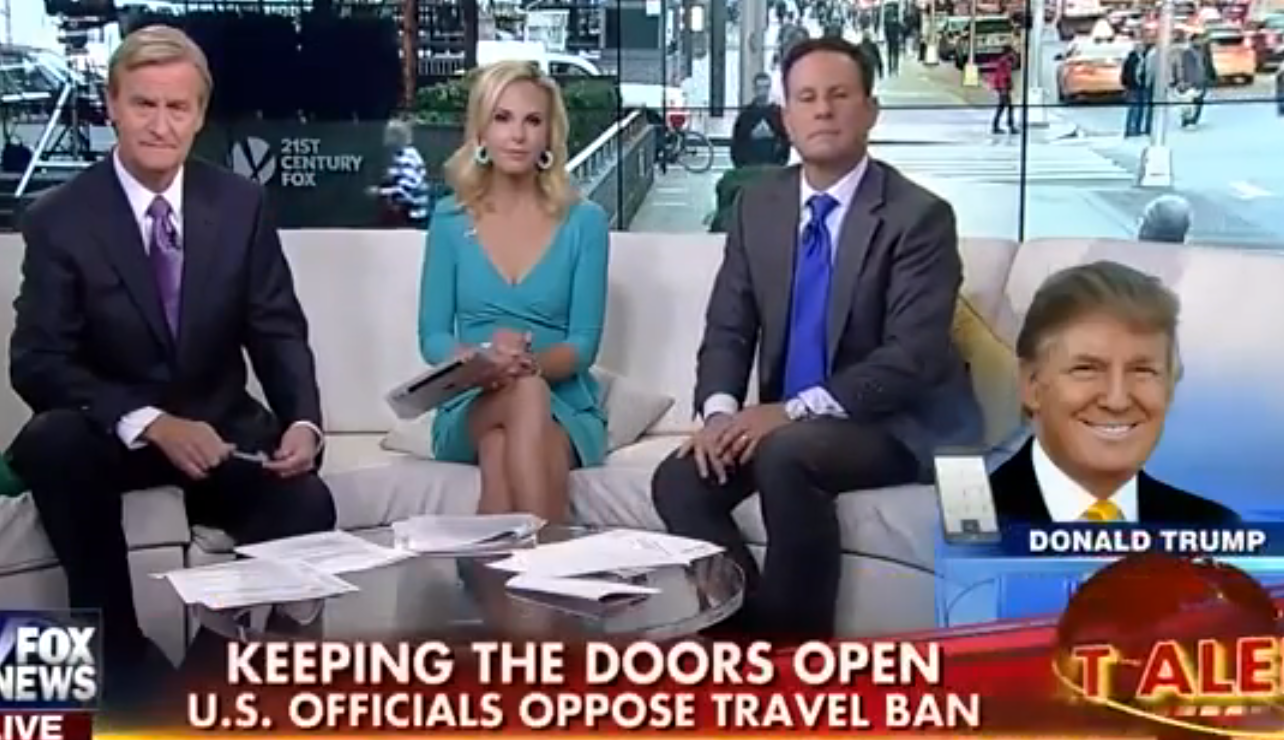 Birther Donald Trump has a new expertise on Fox News: how to handle the Ebola virus. Trump and his pals at Fox & Friends have decided you don’t need no stinkin’ medical degree to know better about Ebola’s dangers to public health than Dr. Anthony Fauci, head of the National Institute of Allergy and Infectious Diseases. Why? Because Benghazi, of course!

This morning, on Fox & Friends, Dr. Fauci smacked down co-host Elisabeth Hasselbeck’s suggestion that we should seal off the border “just until we get things under control.”

FAUCI: From a public health standpoint, that really doesn’t make any sense. It’s understandable how people can figure that that might help but when you completely seal off and don’t let planes in or out of the West African countries involved, then you could, paradoxically, make things much worse in the sense that you can’t get supplies in, you can’t get help in, you can’t get the kinds of things in there that we need to contain the epidemic. And the best way to protect America is to suppress the epidemic in West Africa and if we completely isolate them… we know from experience with public health, that marginalizes them and you could have civil unrest, the governments could fall and then you wind up, could having spread of the virus to other countries in West Africa, which would only compound the problem.

But “Dr.” Trump knows better. In a following segment, he announced:

I think very few people trust our government as being competent. Let’s not kid ourselves. I mean, with the $5 billion website for Obamacare which is still not working, frankly, and it’s a disaster. And so many other things: Benghazi, wars (Steve Doocy helpfully chimed in “IRS”). I mean, we have virtually incompetent leadership. So why would anybody trust our government to handle this crisis?

Yes, why would anybody trust our government over a guy like Trump to know how best to handle the Ebola virus? After all, you don’t need any proof to go on Fox News and fear monger that President Obama is hiding his birth certificate and have nobody care once you are proven utterly wrong. Again. Or to pretend you’re a presidential candidate. Why would Trump need any special training or education now?

We all know that the only credential that counts on Fox is how well you have learned to smear Democrats, liberals and especially Praesident Obama. Tying Ebola to Benghazi almost certainly secured Trump’s place on the Roger Ailes honor roll.

Co-host Brian Kilmeade played the quote from Fauci explaining why it’s not feasible to block travel to and from West Africa. “Now do you change your tune after that?” Kilmeade asked.

No, Dr. Trump didn’t need any second opinion. “I think it’s ridiculous,” Trump proclaimed about Fauci’s conclusion.  Who cares if Fauci has 30 years of working in public health? Certainly not anyone on the Fox & Friends set.

But don't worry. Fox’s Dr. Trump has a public health spirit. He’s “all for” giving medical supplies “and even if doctors want to go there and help I think I’m all for that too. But you know, they do have to suffer consequences. It’s a real problem.”

Trump’s keen medical insight into Ebola has also surpassed the Centers for Disease Control and Prevention. He explained:

You know, it’s interesting. I watch all the time where CDC, the gentleman from CDC, is saying, “You don’t catch it. You can’t catch it. It’s almost like impossible to catch.” …I think it’s a lot easier.

Not one of the three Fox News hosts challenged Trump’s medical credentials.

Watch below for proof that fear mongering trumps (pardon the pun) facts on Fox.

“The Fux Noise tie-breaker must be the Whore of Babble-On Palin.”

NewsHounds posted about ‘Dr.’ Donald Trump Knows Better Than NIAID About Ebola – Because Benghazi! on NewsHounds' Facebook page 2014-10-06 15:55:12 -0400
Why should anyone trust the government over phony presidential candidate and birther Donald Trump?