Last week, I posted about how Fox News used Duck Dynasty's Willie Robertson (son of Phil Robertson) for a special F.U. to gays and liberals on Christmas Eve. Apparently, Fox loved its maliciousness so much, the network is doing it again for New Year's Eve.

As almost anyone alive knows, Robertson patriarch Phil Robertson has offended gays and African Americans with his crude comments about them in a recent GQ article. Fox News talking heads have been falling over themselves defending him including likening him to Pope Francis, President Obama and even Martin Luther King.

Well, now we can add "All American" to the accolades. Huffington Post reports:

"Duck Dynasty" star Willie Robertson will talk about his outspoken father as he helps Fox News Channel ring in the new year.

The network says Robertson and wife Korie will be guests on the "All-American New Year" special Fox News is airing Tuesday night.

Who knows? Maybe by this time tomorrow night, Fox will turn Phil Robertson into Abraham Lincoln, George Washington and Davy Crockett - all rolled into one! 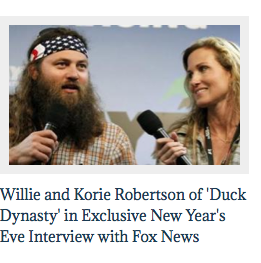 d d commented 2013-12-31 09:42:54 -0500 · Flag
A big FU is exactly what this Duckster appearance looks like. The stooges of the curvy couch are awfully excited about presenting the FOX “news” version of what qualifies as “All-American” and who more represents their narrow viewpoint of what qualifies as “All- American” more than the Ducksters. Geez.

Btw, unless I missed it, I haven’t seen Daddy Douchey and crew doing a segment that discusses the recently surfacing 2009 video with Phil Robertson, the Duckster patriarch, telling men to marry 15-16 year old girls (because girls older than that will only be after your money). No, really, this was his advice to men. But make sure they can cook, clean your ducks and that they carry a Bible.

Antoinette commented 2013-12-31 04:01:02 -0500 · Flag
The Fox “News” producers like the Duckman’s son more than Hannocchio the RINO. Who knows! The Duckman’s son could replace the aging Hannocchio, and bring in higher ratings than this Long Island Lolito.

NewsHounds posted about ...And Now Fox News Enlists Duck Dynasty For A New Year's Eve F.U. To Gays, Blacks And Liberals on NewsHounds' Facebook page 2013-12-30 21:32:27 -0500
Maybe on their "all-American New Year's Eve" Fox will turn Phil Robertson into Abraham Lincoln, George Washington and Davy Crockett - all rolled into one!