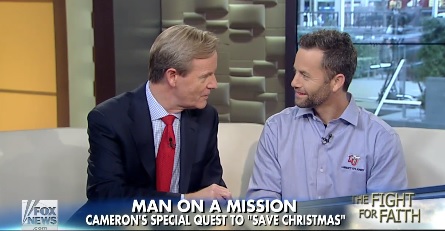 Despite Fox's gushing promotion of Kirk Cameron's "Saving Christmas," this fine example of Christian cinema not only got the lowest IMBD.com film rating evah - but it just earned itself an anti-Oscar "Razzie."

Fox & Friends and Outnumbered totally loved this movie, so it's hard to believe that devout Christian filmmaker and Fox fave, Kirk Cameron has earned a place in Hollywood's "Razzie" wall of shame. His "Saving Christmas" movie was so bad that one reviewer quipped “even devout born-again Christians will find this hard to stomach." Rotten Tomatoes gave it a straight zero score. Its IMBD rating is even worse than Plan 9 From Outer Space which, unlike Cameron's dreck, was entertaining in an ironic sort of way.

I'm chagrined and appalled that Cameron's fine Christian oeuvre would be mocked in this manner. Must be the forces of the evil, secular, gay, atheist agenda that Fox News is always warning us about.

“This movie is why a 0 star rating should be implemented on this site.”