Bill O'Reilly obviously feels that he is entitled to his own opinions which frequently take the form of offensive race baiting. Such was the case two weeks ago when he blamed minorities for violence in schools and elsewhere. But he takes umbrage when others express opinions with which he disagrees. On this week-end's Melissa Harris-Perry show, there was a panel discussion about the onslaught of anti-choice legislation being pushed by the GOP, including the House ban on late term abortion. An African-American female professor expressed her opinion of why this is happening and O'Reilly isn't happy about what she said. So rather than actually discussing her thought provoking views, he did what he always does - he attacked her by totally twisting her statement, out of context, in order to show that she is a racist and interject his latest favorite topic, late term abortion which wasn't, as claimed by O'Reilly, what was being discussed. Forget being hypocritical. Can we say delusional.

On tonight's Factor, Bill had his pouty face on when he introduced his "Impact Segment" which, according to Bill, was about "an incredible display of racial hatred on national television." He reported that Salamishah Tillet, who teaches at the University of Pennsylvania, says that "if you oppose late term abortion and you're white, you might be supporting white supremacy."

He played her alleged "racial hatred" - "So I think that there's a kind of moral panic, a fear of the end of whiteness that we've been seeing a long time and I think Obama's ascension as president kind of symbolizes to a certain degree and I think that this is why one response to that sense that there is a decreasing white majority in the country and that women's bodies and white women's bodies, in particular, are obviously a crucial way of reproducing whiteness, white supremacy, white privilege."

This commentary was made during a discussion of GOP anti-choice crusade to control women's bodies. Late term abortion was not the primary focus. One of the other panel members referenced it when she noted that a similar 20 week state ban was deemed unconstitutional. Another panelist joked that the GOP focus on women's bodies is a gift to Hillary Clinton. Ari Melber, filling in for Harris-Perry, cited the number of anti-choice laws and asked the panel why this was happening.  Tillet, after citing changing census demographics which indicate that minorities will become the majority made her statement.

Bill was incensed and repeated "an amazing display of bigotry and insensitivity to the abortion issue." In his most patronizing manner, he wanted to know what Leslie Marshall thought. She said that she didn't see any other African-American on the panel. Bill obviously didn't see the whole segment or is withholding information because there were two Hispanics at the table. Without identifying the show, he said that the "forum" accepts demonization of conservatives and those who are pro-life. (As opposed to Bill O'Reilly slut shaming women who have late term abortions.) He said that Tillet's comments were "racially charged" and proceeded to lecture on late term abortions and lied when he said "that's what they're talking about."(They weren't)

He claimed that she was saying that if you oppose late term abortion, "you want a white supremacist society" and "this is just sick." Marshall responded that she had never heard of this theory from those who are pro-life. O'Reilly continued to twist her words when he accused her of saying that those who oppose late term abortion want white women to produce babies. He wanted to know where it ends. O'Reilly, who was surprised that blacks have table manners, said that it's offensive to "people of conscience." He accused Tillet of "impugning the motives of those who are pro-life. (As opposed to women who need late term abortions but who, according to Bill, make up frivolous reasons for accessing the procedure.)

One wonders of Bill's pro-life pontifications will engender some nice pro-life death threats directed against a woman who suggested that abortion restrictions might be connected to fear of fewer white babies - and WHO DID NOT SAY that those who oppose late term abortions are white supremacists. Words matter but obviously not for Bill O'Reilly who uses his own words to twist those of others. 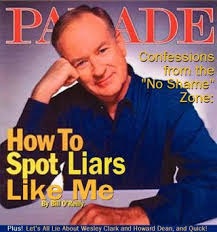 The video of the Melissa Harris-Perry show is no longer available but you can read the transcript and judge for yourself what Ms. Tillet said.


Wow, Rod, you are one frightened individual, aren’t you?
Hey, but if that kind of logic keeps you awake and nervous, then go for it, buddy. The outcome is inevitable. Like your side likes to say, why not just lay back and enjoy it?

Priscilla commented 2013-06-19 21:43:13 -0400 · Flag
One more time. Tillet didn’t accuse anybody of anything but merely offered her take on why the GOP is waging a war on women’s bodies. O’Reilly twisted it into a pretzel to push a standard pro-life whine that they are treated so badly by those nasty pro-choicers. And “commies,” seriously, the 50’s are so over. And about “Debra” blowing us out of the water – as if.

And memo to Debra – MLK, Jr. won an award from Planned Parenthood. Margaret Sanger also worked with WEB DuBois in order to secure the same kind of birth control for blacks that white women accessed.

Richard Perez commented 2013-06-19 19:12:41 -0400 · Flag
Stay brain dead visitor 55 and that goes for the rest of you hypocrite, commie, reverse racists who keep chugging that Kool Aid. You are all a disgrace to this country. Why don’t you all go run home now and watch your state run television. I’m gonna go set my DVR go run and 8 miles and watch me some O’Reilly when I come home. What a bunch of dumb asses!

Richard Perez commented 2013-06-19 16:55:20 -0400 · Flag
Your party and ideology are falling apart at the seams. First your media will ignore him and then they will drag his good name through the mud. But that’s okay because he is in the company of friends.

Maybe the reason for so many African-American women having abortions could have something to do with some of the above statistics. There’s a very good chance that an African-American woman (especially a teenager) is going to have very little support to raise a child—especially one who wasn’t planned or who isn’t wanted—from either her own family or the government (and with the GOPers, it ain’t gonna get any better—although they’re going to do their best to make sure the “slut” has to have that baby).

Save your “concerns” over the racial disparity. I’d be willing to bet money you (and the rest of your ilk) who are so “concerned” at the “death of all those little Black babies” wouldn’t be quite so concerned if all those “little Black babies” HAD been born and ended up requiring welfare. If you (and the rest of your ilk) REALLY want to show your concerns, support groups like Planned Parenthood which, for a very high percentage of INNER-CITY (ie, “Black” and “Latino”) youths, including girls, get birth control and birth control advice at little to no cost. But no. It’s far better to try to convince African-Americans that you (and your mostly lily-white ilk) “care” about the “racial genocide” of Black babies—even though most of your ilk would cross the street rather than run the risk of passing within 10 feet of a real-live Black adult man (or wait for the next elevator car because of that adult Black man who’s either already in the car or is getting in at the same time you do). It’s so funny to me that so many of these “concerned” conservatives want to claim a “racial genocide” but then turn around and say a Black teenager without a gun who’s killed by some guy with a Dirty Harry fetish is the REAL criminal or who’ll claim that a bunch of “heavily-armed scary Black men” intimidated them from voting (when it was really just two Black men carrying nothing more than a nightstick standing outside a polling place and these “voters” didn’t live in the area).

Matt Doyle commented 2013-06-19 14:23:28 -0400 · Flag
Just read the woman’s words in their context- So I think that there’s a kind of moral panic, a fear of the end of whiteness that we’ve been seeing a long time in that I think, you know, Obama’s ascension as President kind of symbolizes to a certain degree. And so I think this is one response to that sense that there’s a decreasing white majority in the country and that women’s bodies and white women’s bodies in particular are obviously a crucial way of reproducing whiteness, white supremacy, white privilege. WTF does that mean Sandman- go back to your Brazzers site.

Richard Perez commented 2013-06-19 13:55:12 -0400 · Flag
I heard the interview and what she said was disgusting and appalling but most of all it was RACIST. She should be ashamed of herself and issue an apology. Sick of these people already.

truman commented 2013-06-19 11:00:57 -0400 · Flag
A daily double hit for Bildo. Race-baiting and demonization of pro-choice women. If he could have worked in a little Muslim bashing, he would hit the trifecta of hate.

requiring much thought or work

in a sincere manner : EARNESTLY

Sandman2 commented 2013-06-19 09:42:24 -0400 · Flag
Perhaps Billdo should invite her onto the “Factor” so he can belittle, sorry I meant interview, the professor with his creative tape editing and bluster.
He may be less apt to lie or mislead while his target is sitting across from him.
Who am I kidding, he’ll just send Watters to ambush her and then lie about her not being willing to come on the “Factor.”

Tommy Venter commented 2013-06-19 09:13:45 -0400 · Flag
Newshounds, like this black nutter are simply racist against white people. If you are white and have white children it’s unacceptable but if you are a black nationalist and have black children, the more the merrier.

I think that when the next civil war comes, there are going to be many more white people on the side of white nationalism than ever before because of these kind of black racists, and the small group of self-hating white liberals who support their black racial-nationalist cause.
—————-
From moderator: This commenter has been banned. I’m allowing the comment to remain so we’ll know why and everyone can see what kind of hatred is out there.

J C Coleman commented 2013-06-19 08:08:37 -0400 · Flag
Ad hominem Antoinette? Really? Is that all you can come up with? Oh, and Priscilla might need a better command of the English language if she wants to be taken even half-way serious with her inane argument. Hard to make a point otherwise. Hard enough when you warp the truth so far to remain coherent, but poor grammar really kills the argument. And that’s not ad hominem (if you’re back from looking that up yet). Ironically, spell check found “Eminem” as a correction for “hominem;” a word it didn’t contain in its vocabulary. And that little tidbit speaks volumes more about the problems in this country than anything written on this page. My words included. So you’re not alone in your ignorance, Priscilla.

Joseph West commented 2013-06-19 00:56:23 -0400 · Flag
Susan Kern, I strongly doubt you even understand the concept of “intellectual honesty” if you choose to defend the intellectually bankrupt talking heads on FoxNoise.

When you find something “intellectually honest” on ANY of the FoxNoise programs, come back and check this site. Unfortunately, that’s why NewsHounds exists—to point out the DIShonesty (moral, intellectual, what-have-you) of FoxNoise.